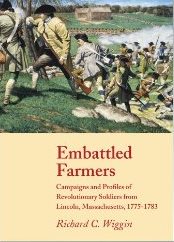 There was nothing extraordinary about these men; they were ordinary farmers, laborers, merchants, tradesmen, slaves, and former slaves, the cross-section of a typical eighteenth-century New England farming community. But when faced with the loss of their cherished liberties and long-standing tradition of self-government, they were swept up in an epic struggle against long odds. These are the forgotten men who fought the American Revolution.

Meticulously researched, Embattled Farmers traces the footsteps of 252 individual men—all connected with the same community—who served as Patriot soldiers. Through repeated enlistments, they served at Lexington and Concord, at the Siege of Boston, and during the campaigns to Ticonderoga, Canada, New York, Saratoga, the Hudson Valley, The Jerseys, Valley Forge, and Yorktown.

Despite family and community ties, four others remained loyal to the King, and fought against their neighbors and kinfolk. They lost everything they had, and lived the remainder of their lives in exile.

Richard C. Wiggin is Historian and past Captain of the Lincoln Minute Men, a colonial re-enactor, and volunteer at Minute Man National Historical Park. He is former Executive Director of Boston’s Old State House, and has written seven audio tours for different segments of Minute Man National Historical Park and Boston’s Freedom Trail. His articles have appeared in Alaska Magazine, the Boston Globe, the Civil War Courier, and The Lincoln Review.

Individual stories tell of under-age service, skirmishes and battles, guard duty, fatigue duty, capture by the enemy, smallpox, desertion, and hardships, as well as service by slaves, economic dislocation, and the practice of substitution.

Collectively, their stories present a fascinating mosaic of a community at war. Told mostly from the perspective—and in some cases the actual words—of the men themselves, Embattled Farmers places the reader shoulder to shoulder with the men-at-arms. As minute men, militia, privateers, Continental soldiers—and Loyalist militia—as officers and foot-soldiers, the stories of these Lincoln men bring to life the human drama of the War for American Independence. The book’s many hidden pearls will delight any armchair historian.

By Henry Schwan Wicked Local Concord November 15, 2015 at 8:03am CONCORD, MA. Philadelphia is…