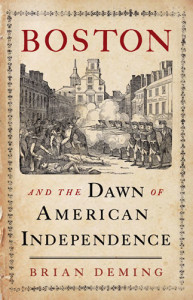 The world of colonial Boston packed up and sailed away long ago, but it left quite a mark. That town of just eight thousand or so adults put the history of a continent and an empire on a new course; inspired a new nation destined to become an engine of prosperity and a beacon of freedom; and demonstrated that people can and should demand justice and dignity, strike back when precious rights are threatened, and never suffer in silence the whims of arbitrary power. Behind that powerful legacy is a compelling story. This is the unlikely tale of how Boston, a loyal and contented colonial town in 1760, turned against British rule and by 1775 ignited the American War of Independence.

Back in 1760, no one could imagine the American colonies revolting against Great Britain. The colonists were not hungry peasants groaning under the whip of a brute. They lived well. Land was cheap, wages were good, opportunities abounded. While denying many thousands of imported Africans and American-born blacks of their liberty, the white Americans themselves enjoyed freedom and prosperity far beyond the hope of most people in the world at that time. Nor were the American colonists chaffing under strange rulers from a foreign culture. They were not Asian Hindus, French Canadians, or Irish Catholics balking at British authority. They were English Christians who loved their king, adored British institutions, and modeled their governments, courts, laws, and lives after what they had known in Britain. While many Americans had been in the New World for generations, they felt themselves British, and England was still “home.” Yet in the space of just fifteen years, the sturdy bonds of affection and loyalty frayed and snapped. The Americans cobbled together a ragtag army to take on not an impotent crumbling kingdom, but a rising, rich, and powerful empire. What a curious turn of events. Boston did more than any other American town to sever those strings to the old homeland and push the colonies to take up arms. Arguably, if not for Bostonians, and such events as the Boston Massacre and the Boston Tea Party, the Battles of Lexington and Concord would not have happened, the Declaration of Independence would never have been written, and the 1770s would be remembered as just a bumpy patch on the long sloping road to gradual independence and proud membership in the British Commonwealth.

Those Bostonians included not just Sam Adams, John Hancock, Paul Revere, and others whose names American children learn in grade school, but also poor shoemakers, feisty printers, brawling seamen, and many others who played fleeting but key roles in this drama. Many Americans today look back on the turbulence in Boston over those years with great patriotic pride. But those days were anxious, heartbreaking, awful times for many of those who lived them. The crisis divided families, fractured marriages, destroyed dreams, and crushed ambitions. Everybody suffered, but especially the Loyalists, who were ostracized, tormented, hounded, and ultimately chased from the land they loved. And their crime? Obedience to laws, devotion to the king. This is their story, too. It is also the story of ordinary people just living their lives. Bostonians of that day didn’t set out to change the course of history. Most of them, most of the time, were carrying on as they always did: going on fishing outings, picking out ribbons for bonnets, trying not to die of smallpox, and just getting by. To modern readers, there is fascination in their everyday joys and wonder in their struggles, so daunting and even horrifying to us.

On Monday morning, July 1, 1776, just as delegates to the Continental Congress were assembling in the East Wing of the Pennsylvania State House to resume debate on declaring independence, a currier handed John Adams a letter from Samuel Chase. The Maryland Convention had suddenly reversed its position, Chase informed Adams. Three weeks earlier, in response to Richard Henry Lee's momentous resolution in favor of independence, the Maryland delegation had stormed out. Then Chase and others sent the matter back to the county conventions, and at least four of these instructed their delegates to the Maryland Convention to instruct its delegates to the Continental Congress to vote in favor of Lee's resolution. In an emergency session on Friday evening, June 28, the Maryland Convention finally conceded to the dictates of the county conventions. "See the glorious effects of county instructions," Chase now boasted to Adams. "Our people have fire if not smothered."

". . . you are to consider the people of this province absolved, on their part, from the obligation therein contained [the 1691 Massachusetts charter], and to all intents and purposes reduced to a state of nature; and you are to exert yourself in devising ways and means to raise from the dissolution of the old constitution, as from the ashes of the Phenix, a new form, wherein all officers shall be dependent on the suffrages of the people, whatever unfavorable constructions our enemies may put upon such procedure. "