(508) 229-1776 compatriots@massar.org Member Login
TwitterFacebookGoogle PlusPinterestVKInstagramLinkedInFlickrVimeoRSS
The Men who lost America: British Leadership, The American Revolution and the fate of the Empire

British Leadership, The American Revolution and the fate of the Empire 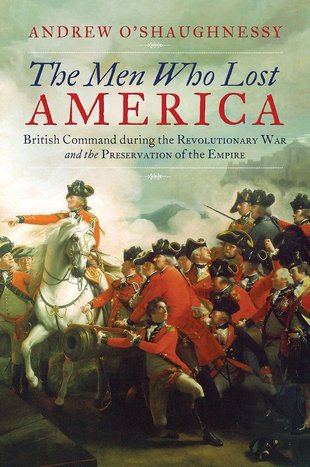 By Andrew O’Shaughnessy
Yale University Press,
$37.50, 466 pages, illustrated
On Oct. 17, 1781, on a road outside Yorktown, Va., the forces of the United Colonies and France awaited the formalities that accompanied any 18th-century military surrender. Early that afternoon, Lord Cornwallis’ vanquished British army belatedly appeared, marching with solemn step and with colors cased. As they approached the surrender field, the royal troops, unable to conceal their chagrin, displayed “unsoldierly conduct.” Some appeared to be drunk.

The shock among British soldiers and their German allies was understandable. The American Revolution was a war that the British had appeared to be winning. A succession of victories on land had been interrupted only occasionally by setbacks at the hand of Gen. George Washington and his Continentals. Then came Yorktown. According to English economist Adam Smith, the “expectation of a rupture with the colonies has struck the people of Great Britain with more terror than they ever felt for a Spanish armada.”

How the British managed to lose the Revolution is now the subject of an extensively researched, gracefully written study by University of Virginia historian Andrew O’Shaughnessy. As the title indicates, the author takes a biographical approach, but after examining the factors that led to Britain’s defeat, he comes up with no single scapegoat. Britain’s defeat was a team effort.

The British generals in America, the author writes, “were not the stuff of parody, but had much in common with modern-day military career professionals in their dedication and commitment.” They were victims, more often than not, of changing priorities among Lord North and his ministers.

Lord North was a weak prime minister, who sought repeatedly to resign his office. His Cabinet colleagues were openly disdainful; one thought him “a good man, but apt suddenly to resolve on a thing, which upon second thoughts he repented of.” George III, in contrast, was very much a hawk. For him, the war was a personal crusade, one in which the very future of his empire was at stake.

Although most Britons believed in the supremacy of Parliament — as most colonists did not — the ruling class was divided between those who favored a conciliatory approach to the colonies and those like the king who believed that the revolt could only be put down by force.

The logistical challenges involved in the American war were daunting. “The [British] army was larger than most cities in America,” the author writes, “with an average of 34,000 men and 4,000 horses who daily consumed 37 tons of food and 38 tons of hay and oats.” Supply ships from Britain required at least two months, and often three or four, to make the 3,500-mile trans-Atlantic voyage.

And what of strategy? The British initially sought to occupy New York City and to separate New England — viewed as the hotbed of revolution — from the Southern colonies. After Burgoyne’s defeat at Saratoga, however, the government opted for a “Southern strategy” on the assumption that the potential for loyalist support was greater in the South. It was a strategy dependent on continued control of the sea by the Royal Navy.

All strategies were based on a serious misreading of sentiment in America. It was an axiom of British policy that most Americans were loyal to the Crown, and that the Revolution was led by “the intrigues of a few bold and criminal leaders.” Loyalists in the Colonies tended to confirm this biased view. After landing on Staten Island, N.Y., in July 1776, Gen. Howe wrote that he expected to recruit a large number of locals from New York, New Jersey and Connecticut.

He was soon disillusioned, for there was a growing groundswell for independence in the Colonies. The presence of British troops and Hessian mercenaries provoked resentment everywhere, and the granting of freedom to runaway slaves alienated whites in the American South. (Mr. O’Shaughnessy estimates that at least 20,000 black Americans joined the British, a far greater number than fought for the Colonies.)

In the end, French naval support allowed Washington to hold off the British. The Royal Navy’s control of American waters was taken for granted, but France’s entry into the war posed a serious challenge. Indeed, Cornwallis’ defeat at Yorktown was a direct result of the appearance of a French fleet off the Chesapeake.

For Britain, the American Revolution was a “perfect storm” — everything that could go wrong did. The author concludes that British strategies failed “not as a result of incompetence and blundering, but because of insufficient resources, the unanticipated lack of loyalist support, and the popularity of the Revolution.” A British officer reached a similar conclusion at the war’s end, writing that “no invading army, in the present enlightened period, can be successful in a country where the people are tolerably united.”

Breaking news of the Revolutionary War

Breaking news of the Revolutionary War What does history look like while you're living it?…

Harvard’s year of exile During the American Revolution, the College moved to Concord As Harvard…