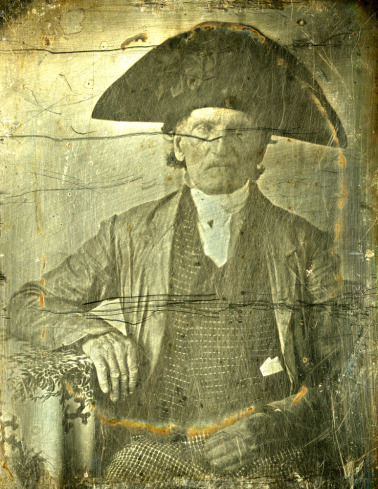 George Fishley was a soldier in the Continental army. When the British army evacuated Philadelphia and raced toward New York City, his unit participated in the Battle of Monmouth. Later he was part the genocidal attack on Indians who had sided with the British, a march led by General John Sullivan through “Indian country,” parts of New York and Pennsylvania. Fishley’s regiment, the Third New Hampshire, was in the midst of the campaign’s only contested battle. After the Battle of Chemung, August 28, 1779, the Americans had devastated forty Indian towns and burned their crops. Later Fishley served on a privateer — a private ship licensed to prey on enemy shipping — and was captured by the British. Fishley was a famous character after the war in Portsmouth, New Hampshire, where he lived. He was known as “the last of our cocked hats” — Continental soldiers wore tall, wide, Napoleonic-looking headgear with cockades. He marched in parades wearing the hat, which his obituary said “almost vied in years with the wearer.” Fishley is wearing the hat in the daguerreotype.
The adoption of the Declaration of Independence—237 years ago today—can sometimes feel like an event not just from another time, but from another world. As depicted in John Trumbull’s now-iconic 19th-century painting of the founding fathers in Philadelphia, collectively creating the framework for the nation’s revolutionary political system, such an act of open rebellion by prominent, wealthy and established figures is literally inconceivable to most living Americans.

The Revolutionary War, raging at that time, saw men young and old answer the Colonies’ call to fight the British redcoats. In their allegiance to the ideals of liberty, these rough troops — illustrated in countless paintings and drawings known to history students everywhere — shouldered the monumental task of defending a nation that was, in many respects, not yet truly born.

But as alien as that epoch might feel, time and again we’re reminded that the past is not always as distant as it so often seems.

In fact, some veterans who survived the Revolutionary War prospered well into their eighties, nineties and sometimes even beyond 100, living long enough to not only witness, but become part of, the era of the photograph.

First daguerreotypes, and then glass-plate negatives became popular in the 1840s and 1850s; by 1853, some 70 years after the great and improbable American victory over the British, more than 3 million daguerreotypes a year were being produced in the United States alone.

As these photographic means developed, and the generation that experienced the Revolution firsthand continued to dwindle, a desire to document these men — a rapidly vanishing, living link with history — emerged.

“Possible now it will soon be impossible forever, and now neglected it would be forever regretted,” wrote Reverend E. B. Hillard, author of The Last Men of the Revolution. Published in 1864, the 64-page book stands as the only record of its kind, immortalizing Revolutionary War veterans in photographs alongside their tales from the fight for independence. In July 1864, Hillard, accompanied by two photographers, brothers N. A. and R. A. Moore, traveled across New England and New York State to interview and photograph all known surviving veterans, six in total. The images, made on glass plate negatives, were then printed on albumen paper and pasted into the book, along with colored lithographs depicting the veteran’s homes.

In 1976, Popular Photography featured the images of The Last Men of the Revolution in its issue commemorating the United States’ Bicentennial. One reader, a Utah-based journalist named Joe Bauman, was already an avid collector of antique photography when he came across the piece.

“I realized that if these fellows were still alive at the time when glass plate negatives were being made in the 1860s, surely there were plenty who were alive during the daguerreian era,” Bauman told TIME. 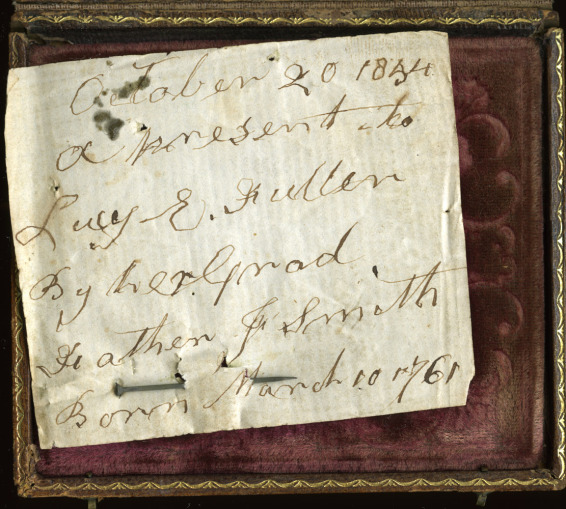 A note by Rev. Smith pinned to the padding of his daguerreotype that reads (Courtesy of Joseph Bauman).
Using skills honed by a career of investigative reporting, Bauman sought out other portraits of Revolutionary War veterans. Given the breadth of the War, where most every man from age 15 to 45 was actively involved in one way or another, Bauman could cast a wide net, searching for daguerreotypes of men around the age of 80 or 90 at the time the images were taken.

Once he located daguerreotypes of men who fit the bill, Bauman used markings on the images and their cases to locate corresponding pension, tax, and other records in order to find what, if any, role these men played in the Revolution. In one such case, Bauman obtained an image of an elderly gentleman only marked with a note to his granddaughter, signed J. Smith with the date of the photograph, October 20, 1854, and his birthday, March 10, 1761. Bauman headed over to the Salt Lake City genealogical library, to dig through census records for all J. Smiths still alive in 1854 who would have been old enough to have served in the Revolution. After gathering a list of candidates, he began looking through pension documents until he came across one who signed his name J. Smith, in the same way as on the back of the daguerreotype. When he checked the date of birth he found exactly what he expected—March 10, 1761. He had found the match.

Thus began the historical digging—a process he repeated for all images collected.

His collection, which now includes eight daguerreotypes, took three decades of research to compile and is considered the largest known collection of Revolutionary War veteran daguerreotypes to date. Several years ago, Bauman published the images, along with histories of the men, in an e-book, Don’t Tread on Me: Photographs and Life Stories of American Revolutionaries, not only bringing to light images that had largely gone unseen, but that astonished — and still astonish — people who never imagined that such portraits even existed.

“It gives you a sort of a direct contact with a person who lived that very long time ago, and experienced these almost mythological-type days,” Bauman said.

Suddenly one critical part of America’s past, previously illustrated in our collective memory almost solely by paintings and drawings, was brought to brilliant life in the photographic present.

“A daguerreotype is a unique image — it isn’t a print, it isn’t a reproduction of any kind,” Bauman explained. “When you have a camera set up to take a daguerreotype and the sitter is in front of you, for example, one of these old men who actually looked and knew and talked to leaders of the Revolution … the light is coming from the sun, hitting his face, and bouncing off of his face through the camera and onto that very same plate.”

Light that shone on men who witnessed the birth of the United States endures, refracted and recorded via photography. Through these characters, that other world is now our own — a shared history made a little more accessible, told in a medium of our own time.

“As we look upon their faces,” wrote Hillard, “as we learn the story of their lives, [history] will live again and again before us, and we shall stand as witnesses of its great actions.”


Elizabeth D. Herman is a freelance photographer and researcher currently based in New York.

Our Founding Fathers and the Second Amendment

Militias. Distrust of government. Abuse of power. The right to bear arms. Not a day passed without a passionate article or an editorial on the role of guns in American life. The year was 1775. More than 200 years later, the seminal debate undertaken as John Adams, Thomas Jefferson and James Madison formulated the laws of the land still echoes. Is the Michigan Militia an aberration or the Constitution in action? Is Gordon Liddy a dangerous demagogue or a devoted patriot? What exactly did the founding fathers mean when they penned the Second Amendment? No sampler can do justice to the debate, but the following excerpts shed light on the perceived relation between arms and liberty.

The oldest 13-stars-and-stripes American flag available for public view is at the Commonwealth Museum. By…