Tens of thousands of items unearthed behind 18th-century Clough House 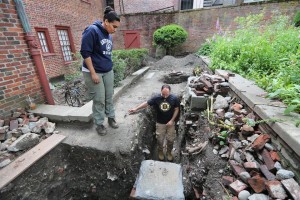 Archeologists Rosemary Pinales and Scott McGaughey worked at a site undisturbed by centuries of nearby development.
Digging and more digging had turned the cramped backyard of a centuries-old North End home into a hole-pocked jumble of back-filled earth that most tourists passed without a glance on their way to Old North Church.

“This whole backyard was a trash dump,” city archeologist Joseph Bagley said, smiling as he walked gingerly around the site. “And back in the day, I think the backyard would have been just disgusting.”

In other words, perfect. 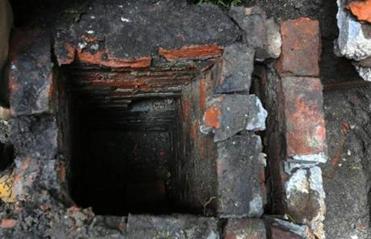 Photos: Digging up the old North End
During two weeks of digging, Bagley and a crew of volunteers collected tens of thousands of items from the 1700s. The haul included long-ago leftovers of everyday life: animal bones, doll parts, and uncounted chips and fragments of dishes and cups that archeologists hope will reveal more about how Bostonians lived as a bustling city sprang up around them.

“They literally would have just thrown these out the window,” Bagley said of a time when the backyard served as a personal landfill. “This will tell a lot about what people were eating, what toys they were using, and what else was going in the backyard.”

The dig also will give archeologists the rare chance to study a North End site untouched by development. From its beginnings as a pasture, this tiny plot of earth at 21 Unity St. has never been built upon, Bagley said.

“It’s incredible because the North End is so tightly developed,” Bagley said. “But this little spot has never been developed — ever.”

A North End team found glass shards and a gun flint, possibly from the Revolutionary War.
The dig followed a decision by the Old North Church, which owns the Clough House, to build a new public walkway to the rear of the home. Under its deed, the patch of land must be studied by archeologists before work can proceed.

The city offered to do the dig for free, Bagley said, in a section of church property where archeologists had never dug before. “We knew we would find stuff back here, but we never expected to find so much stuff from the 1700s,” Bagley said.

The finds include porcelain from China, children’s marbles, a cow or pig tooth, German stoneware, pipe stems, and a ceramic fragment decorated with a painted thistle, possibly from Scotland. Archeologists even found a rat’s skeleton.

The household debris came from a home built around 1715 by master mason Ebenezer Clough, who bought open land down the slope from Copp’s Hill. Clough also helped construct the Old North Church, which opened only steps away in 1723.

“He wasn’t hurting, but he wasn’t rich,” Bagley said of the mason.

The home, originally two stories, was passed down through the family and later used by a merchant, then a mariner, and finally a glazier before being expanded to three stories and converted into a tenement about 1808.

Suddenly, a home that had been occupied for nearly a century by a succession of owner-occupants became crammed with six families in rental units, plus a butcher shop, as the neighborhood became increasingly dense and less affluent.

Moses Grant, one of the tenement’s owners, had been a cargo-tossing participant in the Boston Tea Party more than 30 years before, Bagley said.

The Rev. Stephen T. Ayres, the Episcopal vicar of Old North Church, said Bagley will return to the church in the fall to present a lecture about his findings.

“He’ll be able to say, ‘This was the cheap Walmart dish of the day, and this was a fancy piece,’ ” Ayres said. “He’ll be able to tell us more about the social location of the families who may have left those pieces of pottery behind.”

Once the walkway is built, Ayres said, visitors will have a second entrance to re-creations of Colonial chocolate and print shops.

During the dig, hundreds of people following the Freedom Trail walked by the site every day. For archeologists who are often romanticized in film, but do field work that can be exhausting and unglamorous, the chance to peel away soil in 10 small pits before a large audience was a rare turn in the public spotlight.

“I love working in this city because you never know what you’re going to find, and thousands of people are watching you do it,” said Bagley, whose volunteers included students from local universities. “You never have to argue that history matters here.”

Leslie Dolman, from Toronto, stopped at Bagley’s workshop: stacked shovels, mounds of earth, pools of muddy water, and a grid of 4-foot-deep holes.

“I was thinking about how exciting excavation sites are, how peering into the dark pit makes you feel like a kid again looking for buried treasure,” Dolman said.

The artifacts, placed in polyethylene ziplock bags, were bound for the city’s archeology lab in West Roxbury, where months of cleaning, cataloguing, and analysis will determine if Clough House can add new details to the city’s narrative.

“It makes history feel a lot more relatable,” Bagley said. “We get to rewrite it, too, which happens all the time.”

The spadework is only the start. “Taking stuff out of the ground is basically just taking notes,” Bagley said. “The lab is where everything starts to make sense.”

Photographs: Brian MacQuarrie can be reached at macquarrie@globe.com.

Today, the Worcester Revolution of 1774 announced that their launch of their 'Digital Committee of Correspondence' begins June 1st. Since their mention of it in the fall, they created a way to spread the moments of this dramatic time through the lens of the computer and mobile phone. In fact, their focus on a
Upcoming Events
Feb
19
Sat
9:00 am 2022 Annual Meeting @ Harvard Club of Boston
2022 Annual Meeting @ Harvard Club of Boston
Feb 19 @ 9:00 am – 4:00 pm