If you know the musical “1776,” you know the plot of Joseph J. Ellis’s breezy new book. It’s a stirring and conventional story. A handful of famous men struggle to create a republic against insurmountable odds. In the long run, their greatest challenge is the problem of slavery. But the most immediate threat is the military might of Britain. Toward the end of June 1776, as the Continental Congress nears a vote on American independence, the first of 427 royal ships carrying 1,200 cannons, 32,000 soldiers and 10,000 sailors appears off Long Island. Things look dire, a point made repeatedly in the musical by a soldier bearing gloomy reports from George Washington, the commander of the Continental Army. 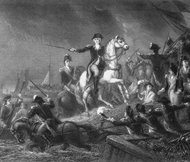 Gen. George Washington directs the retreat of his troops across the East River from Brooklyn, Aug. 29, 1776. Engraving by J. C. Armytage from a painting by Wageman.

In Congress, the Pennsylvanian John Dickinson, a respected spokesman for the rights of British Americans, calls for delay, arguing that independence is a dangerous step in the absence of a national government and European allies. But the passion of John Adams, the wisdom of Benjamin Franklin and the eloquence of Thomas Jefferson carry the cause of independence to fruition in early July. Weeks later, Gen. William Howe and his brother, Adm. Richard Howe, eager to promote reconciliation, fail to exploit their overwhelming advantage, allowing humiliated patriot forces to escape into New Jersey. All is not lost. Out of the ashes of defeat, Americans rise committed to the national institutions that will sustain their glorious cause until the British give up and go home.

“Revolutionary Summer,” however, purports to be a history of national origins, not a collective biography of men who apparently talked only to one another. Make no mistake: the founding fathers earned the fame they coveted by making consequential decisions. But in the summer of 1776 they were concerned about much more than the British Army. The War for Independence was also a civil war within the British Empire and an episode in a continuing conflict over the fate of North America. Ellis’s book is not wrong; it’s just incomplete and superficial. Even as he explodes the notion that volunteers won the war, he underscores an equally pervasive idea that the actions of Congress and the American Revolution were one and the same.

It simply won’t do to talk about a revolutionary summer in which the only voices are those of prominent white men and the recollections of 15-year-old Joseph Plumb Martin, written decades later. Ellis includes a handful of paragraphs on women, enslaved Africans and working-class artisans. But they read like generic concessions to critics who have chastised him for celebrating already celebrated white men rather than the rest of North America’s diverse population. The point Ellis misses is that attention must be paid to the people outside Congress not from a desire to make history more inclusive but because their voices were loud and their choices important, not least in their impact on the actions of the men inside Congress.

Incorporating more people would fundamentally change Ellis’s story, making it messier and less predictable. The “conspicuous consensus” on independence that emerged in Congress occurred nowhere outside of New England. Nor, again, were the maneuvers of the British Army the only challenges confronting members of Congress. It seemed obvious to many Americans that a state of war had existed with Britain since shots were fired at Lexington on April 19, 1775. Everywhere ad hoc committees were creating new political institutions, agreeing with Thomas Paine in his best-selling “Common Sense” that monarchy, not George III, was the basic problem. Honest men could govern themselves better than “the Royal Brute of Britain” could; on the day Americans proclaimed a new charter of government in which “the law is king,” they should demolish a symbolic crown and scatter its pieces “among the people whose right it is.”

This stunning proposition horrified other Americans. Just as thousands were choosing independence because it promised revolution in favor of natural rights and self-government, so thousands were choosing the British Empire because they dreaded a democratic revolution that they feared would degenerate into anarchy and popular tyranny. Many believed the imperial tensions reflected inept administration rather than structural failure. Ellis writes that “most probably, a poll of the American population” in September 1776 “would have revealed a citizenry more politically divided and receptive” to Richard Howe’s peace terms “than the Continental Congress or its diplomatic representatives.” It is a point he fails to develop. Adams spoke for a small percentage of the population. So did Dickinson.

The Howe brothers, moreover, were right to expect widespread support for a British Empire that had long championed Protestantism, commerce and liberty. Loyalists encompassed a wide variety of people who believed the British constitution more likely to secure their rights and protect their interests than new republican, or worse democratic, schemes. They were not just wealthy merchants and imperial officials. They were enslaved Africans in Virginia, where the royal governor, John Murray, fourth Earl of Dunmore, had offered freedom to those who would fight for George III. They were ordinary men and women who distrusted colonial aristocrats or revolutionary mobs to govern fairly. Many Americans fought and died for their king; tens of thousands emigrated rather than live in the new republic.

Still others tried to take advantage of the “family quarrel” among the British. William Howe, who had served in North America during the French and Indian War, understood that the Iroquois in upstate New York were formidable players who would most likely ally with the British. So did Washington, which is why he would dispatch Gen. John Sullivan and several thousand men to destroy Iroquois villages in 1779.

In short, what made the summer of 1776 revolutionary was the range of options, the cacophony of voices, the increasing resort to violence, the growing sense that nothing was safe. Americans like to believe that their revolution as well as their independence was a moderate affair in which the founding fathers were in control of events rather than the other way around. Unfortunately, “Revolutionary Summer” reinforces that perception.

On July 9, 1776, George Washington ordered the Declaration of Independence read aloud to units of the Continental Army assembled on the Commons in New York City. Soldiers then joined civilians in toppling and decapitating a two-ton equestrian statue of George III. Washington was dismayed. Although his men had acted out of “zeal in the public cause,” they had given “the appearance of riot” and should “in future” leave “these things” to the “proper authority.” The general did not punish any individuals. In a summer when no one could agree on what constituted proper authority, more than statues might lose their heads. Anything was possible.

Andrew Cayton teaches American history at Miami University in Oxford, Ohio. He is the author of “Love in the Time of Revolution: Transatlantic Literary Radicalism and Historical Change, 1793-1818.”

A version of this review appeared in print on June 30, 2013, on page BR12 of the Sunday Book Review with the headline: Escape From New York.

Independence Lost: Lives on the Edge of the American Revolution by Kathleen DuVal Published July…

George Washington's Headquarters and Home in Cambridge Massachusetts Authored by J. L. Bell for the…