Delegates and guests of the Kansas City congress will find a bustling, thriving atmosphere in downtown Kansas City few Revolutionary War patriots traveled the edge of the western frontier. Their final resting places were near the Town of Kansas, as Kansas City was once known.

The grandchildren and younger generations of patriots found vibrancy in the area as they set out on their own historic grand adventures to the great American desert when they crossed the Oregon, California and Santa Fe trails. That was Kansas City of yesterday. These days, Kansas City is still an exciting, vibrant city! The Missouri Society invites all compatriots, their spouses and guests to the Kansas

The 123rd Congress will convene at the Kansas City Marriott in the heart of downtown. From July 5-10, you’ll find eight blocks of dining and nightlife inside the new Kansas City Power & Light District. That’s more than 50 restaurants and entertainment venues, offering everything from fine dining to line dancing. Browse the galleries at The Nelson-Atkins Museum of Art. Hop on down to Crown Cen ter. Jump in a cab to explore the outstanding Country Club Plaza. Experience the Host Reception at the nation’s only World Art Museum. One of the tours will feature the home of the 33rd President and Compatriot Harry S Truman.

“Take a plane, take a train'” or drive. Getting to Kansas City is easy. A number of major airlines offer service to Kansas City. Amtrak has service from Chicago, St. Louis, and from the \:Vest. Plus, the depot is about a mile from the Marriott. And it seems all roads lead to Kansas City with four interstate highways converging on it. Check out the Congress webpage for airport and hotel transportation details. 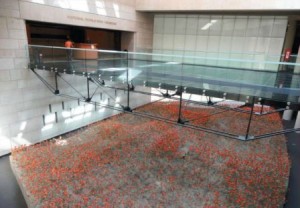 The Downtown Kansas City Marriott is one of the leading hotels in Kansas City with a newly renovated lobby and lounge area. The Congress, banquets, merchandise, information desk, credentials and displays will “own” the second floor. We’ve secured one of the best Congress hotel rates at $119 per night. See the new Congress webpage for reservation details. Consider extending your stay by one night to take advantage of the tour to Fort Leavenworth

It seems that more and more compatriots are arriving on Friday, and we’re ready! Kansas City was a famous river city during the westward expansion, and riverboats were essential transportation. We’ll take a trip back in time at a Friday night reception in the Arabia Steamboat Museum, observing the fascinating 200 tons of cargo that was recovered from the 1856 sunken ship, Arabia. This delightful evening begins with bus transportation to the museum and heavy hors d’neuvres.

A Reception THAT will. ‘Wow’ The Missouri Society will open the Congress vvi.th a top­ notch reception at the National World War I Museum. This is the nation’s only museum dedicated to the “war to end all wars.” Vis tors will be engaged with videos, exhibits, and incredible interactive displays. The entrance into the museum is across a glass bridge over thousands of red poppies that symbolize those who sacrificed their lives during the war. But first, enjoy some of the finest barbecue in Kansas City. Whether you take a docent­ guided tour or stroll through the museum, you’ll be wowed! Don’t miss the gift shop. Buses will transport guests between the hotel and museum.

The Missouri Society has worked with a professional tour planner to show compatriots and other guests the best of the city. Discover historic Kansas City on Saturday. You’ll see and visit sites that made the tour a hub for traveling out west in the 19th century. One of the visits will include the Alexander Majors House, the home of the ma n who started the Pony Express. He owned 3,000 oxen for hauling freight down the trails and was one of the nation’s first millionaires in 1860. Lunch will be a t one of the famous Kansas City restaurants. There are two tour options for Wednesday. The Art Museum tour will visit the internationally famous Nelson-Atkins and the Kemper art museums. Lunch will be provided at a museum restaurant. The other tour is Historic Independence. This tour probably will include a stop at the Harry and Bess Truman home, the Truman Presidential Library, and a visit to the Frontier Trail s Museum, where one will l earn about the Oregon, Santa Fe and California trails that originated in this city. Lunch will be provided

The flags will be fluttering as the color guard leading a procession down the street to the race and Holy Trinity Cathedral. This historical and beautiful cathedral is home to the Episcopal Diocese of Western Missouri and is a cornerstone for religious worship in the downtown area. Ladies, hats are acceptable attire. Transportation will be available for those with limited mobility.

The day will begin with a visit to the internationally famous Hallmark Visitors Center. Then, ladies will travel down the street to one of Kansas City’s most unique destinations- the Webster House. It features distinctive dining and shopping inside a restored Romanesque-style school.

The First Lady has selected this venue for its award-winning restaurant with spectacular views of the city. Afterward, browse in the shop, which contains beautiful European antiques, gifts, clothing, jewelry and personal accessories.

There is so much western frontier hi story in the area that another tour has been arranged for the Thursday following the Congress. A tour of historic Fort Leavenworth, established in 1827, will include the Command and General Staff College’s Cross & Clark Center with a photo op in front of the Revolutionary War stained glass window, a visit to the Frontier Army Museum and a narrated tour of the fort by a fellow compatriot who has written several books about its historical element. Lunch will be served in the newly remodeled Frontier club, formerly the officers’ club.

You can’t see all of Kansas City during Congress, but you can sure try. There is so much to see and do in the city of fountains that we’re encouraging compatriots and guests to come early and stay late- as many as three extra days at a very attractive rate. Check Our visit Kansas City on the Congress webpage. The 123rd Congress in Kansas City will be a great Midwest experience, from historic sights and shopping to the great t restaurants. The Missouri Society is excited to host the l23rd Congress!

Recipient of the Congressional Medal of Honor By Joseph W. Dooley, Treasurer General On Saturday,…