About 1,700 African Amerian and American Indian men have been identified in a study as being among the nearly 68,000 soldiers Massachusetts supplied to the army during the Revolution.1 General Artemus Ward, George Washington’s predecessor as Commander-in-Chief, issued the first general order of the Continental Army in the spring of 1775. That order required that a descriptive return, including “complexion,” be made of all men in the army.2 Although it was not always followed to the letter, the order has made the task of identifying minority participants in the Revolution less difficult. 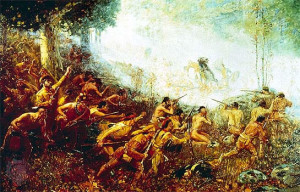 At the outbreak of the Revolution, there were approximately 1,700 Indians living in Massachusetts. While most Indians resided in the counties on or around Cape Cod, over 200 lived near Stockbridge in western Massachusetts.51 The Bay State had been seeking Indian support for the American cause even before the Lexington uprising.

The Indian company, which had been formed under the commands of Colonel Paterson, Captain Goodridge and an Indian 2nd Lieutenant, Jehoiakim Mtohksin, marched to the army’s headquarters at Cambridge after learning of the Alarm at Lexington.54 Their arrival was reported back to England by the British Commander-in- Chief, General Thomas Gage, who wrote on April 30, “A company of Indians are come down from Stockbridge and more are to be provided if they are wanted.”55

After the events at Lexington and Concord, the second Provincial Congress continued to discuss the question of Indian participation and in May 1775 established a committee comprised of Captain Stone, Colonel Warren and Mr. Sullivan “to take into consideration the expediency of taking measures for raising a company or two of Indians.”56 Even while those discussions were going on, Indians were fighting on the side of the Americans. which he had taken and as an incentive to encourage other Indians to join the Americans.57

Shortly thereafter, several of the Stockbridge Indians who were encamped at Cambridge addressed a petition, dated June 21, to Joseph Warren, President of the Provincial Congress, setting forth certain terms under which they wished to be paid. On the same day, two men from the company, which numbered about fifty, killed four British regulars. Others from the Stockbridge Company were involved in an incident on July 8, during which the British soldiers who were taking soundings in the river near Cambridge were forced to withdraw.59

Washington’s correspondence between the years 1776 and 1779 indicates that he did continue to employ Stockbridge Indians.63 However, in One of the first to become involved in battle was Henries Vomhavi who was allowed to keep a little horse which he had taken during skirmishes at Noddles Island, near Boston, in late May and early June. Vomhavi was awarded the horse for the risks September 1781, he rejected an offer of support from them and stated in a letter to General William Heath that “their services never compensated the expense.”64 Ironically, just two months previously, the town of Stockbridge had enlisted Benjamin Towsey, a 17 year old Indian, to serve for three years in the Continental Army.65

Massachusetts did indeed employ Indians during the Revolutionary War. For example, in May 1775, Abraham Nimham, a Stockbridge Indian, was paid “thirty six shillings lawful mony” by the Receiver General of Massachusetts for carrying a message.66

In October 1777, the Continental Congress instructed that 200 dollars be paid Abraham Nimham and his companions “…as an acknowledgment for their zeal in the cause of the United States,”67 and for their service under Major General Gates.68 The above-mentioned Abraham Nimham was the same “old sachem” that, with a young chief Nimham, was brutally murdered by the British in a skirmish near Kingsbridge, New York on August 31, 1778. A total of 30 Indians were killed in the skirmish and many more were wounded.69

One of the most heterogeneous Massachusetts military organizations was a company commanded by Captain John Chadwick of Tyringham in Berkshire County.70 Among the members of the company were Agrippa Hull71 and Frank Continental Army with the Officers (Washington: U.S. Government Printing Office, 1915), 1:171, 735: 2:1056, 1067. Dunkins,72 two African Americans from Stockbridge in Berkshire County. Both Hull and Dunkins were pensioned after the war. Serving in the same company was a group of Indians from Mashpee in Barnstable County, which is located at the opposite end of the State. Two of the Mashpee Indians, Joseph Keeter73 and Job Rimmon,74 had died during the war. Daniel Pocknit, from Mashpee, who also served in Chadwick’s company, received bounty land from both the State and the Federal Government after the war. 75

The Mashpee and Stockbridge Indians suffered heavy losses during the war. Reverend Gideon Hawley, minister to the Mashpee plantation, stated in 1783 “At that time, there were no less than seventy widows on the plantation.”76 Most of the widows had lost their husbands during the war.77

Reuben Baldwin, a lawyer from Sandwich, Massachusetts, and Greene County, New York, assisted Revolutionary War veterans of all colors in receiving their pensions and bounty land warrants. Several of the men were from the Mashpee Plantation/Tribe. The file for Job Hathaway (BLWT- 1931-100) contains a letter from Reuben Baldwin, regarding “an application for Bounty Land by the Heirs of ‘Six Coloured Men’,” in which the application of Simon Penny is mentioned.78 Determining who these six men were was an interesting research project. Simon Penny’s (BLWT- 1941-100) application also has pages with Reuben Baldwin’s forwarding address attached, and Obed Coffin’s (W14569) application is identified. The Massachusetts Soldiers and Sailors entry for John Frances (S34887) lists three other men, who all happened to be assisted by Reuben Baldwin: Jacob Keeter (BLWT-1928-100), Francis Keeter (no known pension), James Keeter (S32942), and widow of John Frances, Patience, who at that time was also the widow of Scipio Allen (no known pension.) Reuben Baldwin’s initials and notes are also on Primus Jacobs’ (W21446) widows claim. There are three other men who Reuben Baldwin lists as assisting: Peter Sears, Peleg Stevens and Jabez Jolley.

By the close of the war, nearly half the Stockbridge Indian men had died or been killed.79 In 1785, their survivors migrated to the Oneida reservation at New Stockbridge, New York.80 On December 2, 1794, those survivors were parties to a treaty with the United States, which was made as payment for the services of the Indians during the Revolution. The treaty granted the Stockbridge, Oneida and Tuscarora Indians 5,000 dollars, to be divided among the three groups. It also provided that a sawmill, a gristmill, and a church be built in the country of the Oneidas.81