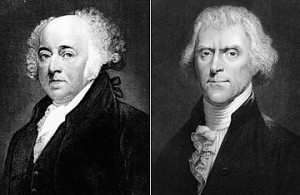 Militias. Distrust of government. Abuse of power. The right to bear arms. Not a day passed without a passionate article or an editorial on the role of guns in American life. The year was 1775. More than 200 years later, the seminal debate undertaken as John Adams, Thomas Jefferson and James Madison formulated the laws of the land still echoes. Is the Michigan Militia an aberration or the Constitution in action? Is Gordon Liddy a dangerous demagogue or a devoted patriot? What exactly did the founding fathers mean when they penned the Second Amendment? No sampler can do justice to the debate, but the following excerpts shed light on the perceived relation between arms and liberty.

“… arms… discourage and keep the invader and plunderer in awe, and preserve order in the world as well as property. … Horrid mischief would ensue were (the law-abiding) deprived the use of them.” -Thomas Paine.

“Experience hath shewn, that even under the best forms [of government] those entrusted with power have, in time, and by slow operations, perverted it into tyranny.” -Thomas Jefferson, Bill for the More General diffusion of Knowledge (1778).

“The best we can hope for concerning the people at large is that they be properly armed.” -Alexander Hamilton, The Federalist Papers p. 184-B.

“Guard with jealous attention the public liberty. Suspect everyone who approaches that jewel. Unfortunately, nothing will preserve it but downright force. Whenever you give up that force, you are ruined…The great object is that every man be armed. Everyone who is able might have a gun. -Patrick Henry.

“To preserve liberty it is essential that the whole body of the people always possess arms and be taught alike, especially when young, how to use them…” -Richard Henry Lee writing in Letters from the Federal Farmer to the Republic (1787-1788).

“The Constitution shall never be construed to authorize Congress to prevent the people of the United States, who are peaceable citizens, from keeping their own arms.” -Samuel Adams, debates & Proceedings in the Convention of the Commonwealth of Massachusetts, 86-87.

“The people are nor to be disarmed of their weapons. They are left in full possession of them.” -Zachariah Johnson, 3 Elliot, Debates at 646.

“If the representatives of the people betray their constituents, there is then no recourse left but in the exertion of that original right of self defense which is paramount to all positive forms of government,..” – Alexander Hamilton, The Federalist Papers #2.

“As civil rulers, not having their duty to the people duly before them, may attempt to tyrannize, and as the military forces which must be occasionally raised to defend our country, might pervert their power to the injury of their fellow citizens, the people are confirmed by the article in their right to keep and bear their private arms.” -Tench Coxe, Remarks on the First Part of the Amendments to the Federal Constitution, under the pseudonym “A Pennsylvanian” in the Philadelphia Federal Gazette, June 18, 1989 at col. 1.

“On every question of construction (of the constitution) let us carry ourselves back to the time when the Constitution was adopted, recollect the spirit manifested in the debates, and instead of trying what meaning may be squeezed out of the text, or invented against it, conform to the probable one in which it was passed. ” (Thomas Jefferson, letter to William Johnson, June 12, 1823, The Complete Jefferson, p.322)

“The right of the people to keep and bear…arms shall not be infringed. A well regulated militia, composed of the body of the people, trained to arms, is the best and most natural defense of a free country … ” (James Madison, I Annals of Congress 434, June 8, 1789)

“A militia, when properly formed, are in fact the people themselves… and include all men capable of bearing arms. ” (Richard Henry Lee, Senator, First Congress, Additional Letters from the Federal Farmer (1788) at 169)

“What, Sir, is the use of a militia? It is to prevent the establishment of a standing army, the bane of liberty. … Whenever Governments mean to invade the rights and liberties of the people, they always attempt to destroy the militia, in order to raise an army upon their ruins. ” (Rep. Elbridge Gerry of Massachusetts, spoken during floor debate over the Second Amendment, I Annals of Congress at 750, August 17, 1789)

“…to disarm the people (is) the best and most effective way to enslave them… ” (George Mason, 3 Elliot, Debates at 380)

“Before a standing army can rule, the people must be disarmed; as they are in almost every kingdom of Europe. The supreme power in America cannot enforce unjust laws by the sword; because the whole body of the people are armed, and constitute a force superior to any bands of regular troops that can be, on any pretense, raised in the United States ” (Noah Webster in a phamphlet aimed at swaying Pennsylvania toward ratification)[2]

“…but if circumstances should at any time oblige the government to form an army of any magnitude, that army can never be formitable to the liberties of the people, while there is a large body of citizens, little if at all inferior to them in discipline and use of arms, who stand ready to defend their rights… ” (Alexander Hamilton speaking of standing armies in Federalist 29.)

“Congress have no power to disarm the militia. Their swords, and every other terrible implement of the soldier, are the birthright of an American… The unlimited power of the sword is not in the hands of either the federal or state government, but, where I trust in God it will ever remain, in the hands of the people ” (Tench Coxe, Pennsylvania Gazette, Feb. 20, 1788)

“The right of the people to keep and bear arms has been recognized by the General Government; but the best security of that right after all is, the military spirit, that taste for martial exercises, which has always distinguished the free citizens of these states…Such men form the best barrier to the liberties of America. ” (Gazette of the United States, October 14, 1789)

“The supposed quietude of a good man allures the ruffian; while on the other hand, arms like laws discourage and keep the invader and the plunderer in awe, and preserve order in the world as well as property. The same balance would be preserved were all the world destitute of arms, for all would be alike; but since some will not, others dare not lay them aside… Horrid mischief would ensue were one half the world deprived the use of them… ” (Thomas Paine, I writings of Thomas Paine at 56 (1894))

“To preserve liberty, it is essential that the whole body of people always possess arms, and be taught alike, especially when young, how to use them… ” (Richard Henery Lee, 1788, Initiator of the Declaration of Independence, and member of the first Senate, which passed the Bill of Rights.)[5]

“The great object is that every man be armed. Everyone who is able may have a gun. ” (Patrick Henry, in the Virginia Convention on the ratification of the Constitution.)[1]

“Are we at last brought to such humiliating and debasing degradation, that we cannot be trusted with arms for our defense? Where is the difference between having our arms in possession and under our direction, and having them under the management of Congress? If our defense be the _real_ object of having those arms, in whose hands can they be trusted with more propriety, or equal safety to us, as in our own hands? ” (Patrick Henery)[8]

“The best we can hope for concerning the people at large is that they be properly armed. ” (Alexander Hamilton, The Federalist Papers at 184-8)

“That the said Constitution shall never be construed to authorize Congress to infringe the just liberty of the press or the rights of conscience; or to prevent the people of The United States who are peaceable citizens from keeping their own arms… ” (Samuel Adams)[4]

“And what country can preserve its liberties, if its rulers are not warned from time to time that this people preserve the spirit of resistance? Let them take arms….The tree of liberty must be refreshed from time to time, with the blood of patriots and tyrants ” (Thomas Jefferson)[6]

“Arms in the hands of citizens [may] be used at individual discretion… in private self-defense… ” (John Adams, A Defense of the Constitutions of the Government of the UAS, 471 (1788))

“The strongest reason for the people to retain the right to keep and bear arms is, as a last resort, to protect themselves agianst tyrany in government. ” (Thomas Jefferson)

“Last Monday a string of amendments were presented to the lower house; these altogether respect personal liberty… ” (Senator William Grayson of Virginia in a letter to Patrick Henry)

“The whole of the Bill [of Rights] is a declaration of the right of the people at large or considered as individuals… It establishes some rights of the individual as unalienable and which consequently, no majority has a right to deprive them of. ” (Albert Gallatin of the New York Historical Society, October 7, 1789)

“The Constitution of most of our states (and of the United States) assert that all power is inherent_in_the pe_ople; that they may exercise it by themselves; that it is their right and duty to be at all times armed.” -Thomas Jefferson.

“Laws that forbid the carrying of arms… disarm only those who are neither inclined nor determined to commit crimes… Such laws make things worse for the assaulted and better for the assailants; they serve rather to encourage than to prevent homicides, for an unarmed man may be attacked with greater confidence than an armed man.” – Thomas Jefferson, quoting Cesare Beccaria.

Andres Cragie: Life of a Massachusetts patriot and scoundrel