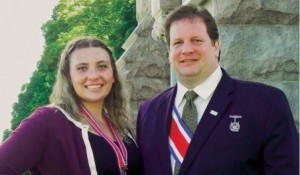 The John Stark Society, in which Jackson is still a senior leader, has won numerous contests and accolades, and has been honored as the National C.A.R. No. 1 society in the nation. New Hampshire members have been pictured in numerous newspapers and magazines and have taken part in filming for PBS features and the Discovery Channel’s Unsolved History: The Boston Massacre.

Jackson, the first SAR member elected as the Senior National President, has served at all levels within N.S.C.A.R., holding multiple positions throughout his service. 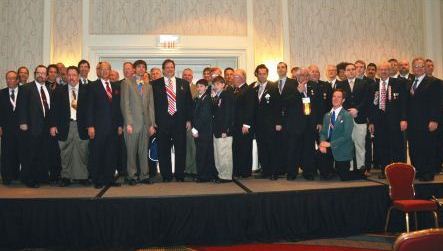 Jackson resides in Derry, N.H., with his wife, Trish, and their two children, Erin and Connor. Setting a great example for SAR and DAR members, the Jacksons have made C.A.R. a genuine family affair. Erin is serving N.S.C.A.R. as National Recording Secretary, and Connor is the New Hampshire state president. Trish is an elected Senior National Honorary Vice President, is serving her second term as Senior National Convention Chairman for the N.S.C.A.R., and is the chapter regent for the Molly Stark Chapter, DAR. It is this kind of family support that creates lasting memories and forges strong connections among our organizations.

As a senior leader for the C.A.R., Jackson has mentored young people through countless interactions. Honorary Senior National President Lois W. Schmidt noted that “[h]e gives each member, whether 1 or 21 years of age, his rapt attention and seeks out that interaction. He is never too busy to spend time with a member.”

Jackson’s leadership example extends to being a role model for senior leaders, too. He routinely demonstrates how C.A.R. is about the membership, and has led many activities to improve the organization for the benefit of the members. On the strategic level, he has applied his business management experience and subject matter expertise to influence technology innovation at N.S.C.A.R. Headquarters.

President General McCarl applauded Jackson’s election as Senior National President, saying “[Jackson is] greatly dedicated to the activities of C.A.R. at all levels and especially with the New Hampshire Society. He has been a valuable liaison with SAR and we [the SAR] are pleased to work with him in cooperative C.A.R./ SAR activities.”

As an SAR member, Jackson has served in numerous state positions, including New Hampshire SAR state president 2002-04. He also has served the National Society SAR as Vice President General New England District 2008-09, and a committee member on the C.A.R., Color Guard, Patriotic Education, Council of State Presidents, and Council of Vice Presidents General committees. He was a founding member of the SAR’s New England Contingent Living History Unit that took part in hundreds of events educating thousands of students on multiple facets of the American Revolution.

More than 600 people attended the Youth Awards Luncheon on Monday. Among the major award…