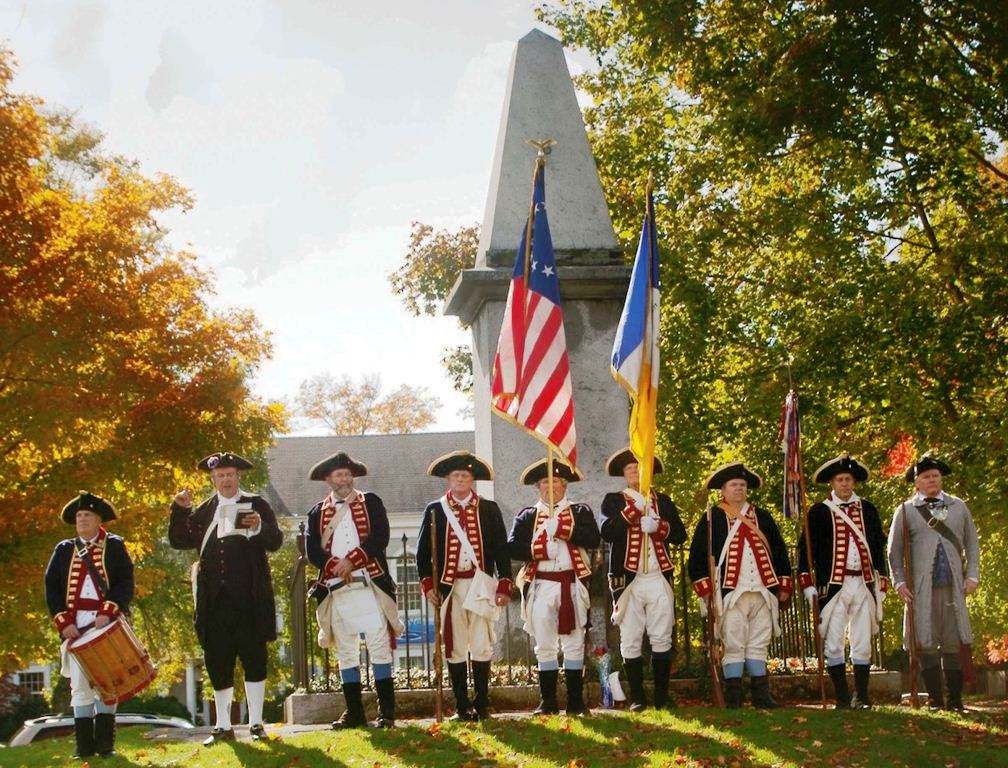 From left, David Conkling, Pastor Garrett Lear, Allan Van Wert, John Cunningham, Vern Thayer, Charles O. Kingsbury, Henry Curtis, Commander Steven Perkins and Col. Dan Meenan of the Sudbury Company Militia. (Photo courtesy of Glenys Gustin)
The Col. Henry Knox Color Guard celebrated the victory and end of the American Revolution with its annual Yorktown Celebration Victory meeting at the Museum of Our National Heritage in Lexington, Massachusetts on October 20th. An overflow crowd of 90 enjoyed a catered brunch with Old Middlesex Chapter and a presentation by William H. White, who discussed the U.S. Navy’s struggles and successes in the War of 1812. Numerous awards were presented, as well as a posthumous award for heroism to the mother of Navy Seal Glen Doherty, who was among those servicemen killed at the U.S. Embassy in Benghazi, Libya, Sept. 11, 2012. Mrs. Doherty, Glen’s sister and several nieces and nephews attended the recognition.

Following the meeting, attendees were shuttled to the Old Burying Grounds in Lexington, where the color guard conducted a memorial service and laid a wreath at the headstone of Maj. Samuel Hastings Jr. The color guard was joined by Col. Dan Meenan of the Sudbury Company of Militia, who symbolically led the march to the gravesite, and then to the Lexington Green. At the green, Compatriot Pastor Garrett Lear, the New Hampshire society, read the words inscribed on the monument’s tablet commemorating the events that occurred there on the morning of April 19, 1775.

The guard fired a musket salute at each of the two locations. The day’s events ended back at the museum with tours of various exhibits.

Interview with Representative Michael N. Castle of the Delaware Society

An Interview with Representative Michael N. Castle of the Delaware Society By Timothy R Bennett,…