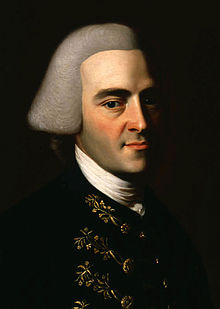 The trouble between Harvard College and its treasurer, John Hancock, is too well known for detailing. Hancock, engrossed in affairs of graver importance, went off to Philadelphia carrying all the bonds and papers of the college with him, and, either from negligence or preoccupation turned a deaf ear to all the entreaties from the college officers. The comedy begins in a vote of the Corporation early in the spring. With the utmost suavity of language they desire to relieve him at once of his cares and the college money.

“Considering the present appearance of public affairs,” are the words, “and that the Treasurer will soon be obliged to attend the Congress in Philadelphia, where he may be long detained; and being desirous to relieve the Treasurer from such a burden on his mind.

“Voted: That Colonel Hancock be requested to deliver the monies and papers belonging to the College Treasury into the hands of the President, Dr. Appleton, Dr. Winthrop and Dr. Eliot.” An eloquent and significant sentence is appended:

After the action at Bunker’s Hill, and when the siege of Boston had begun in earnest, the army flooded into the buildings of the old group, Massachusetts, Harvard and the old Stoughton, the college pots and kettles were used for the army mess, and the college went to Concord and held its sessions in the meeting-house. The records for 1775 and 1776 bristle with the details of this exodus. On Sept. 6, 1775, there is a vote:

“N.B.-The above is not complied with by the Treasurer.” The date of this vote is April 10. Eight days later, Lord Percy came up across the Charles from the south and marched into the conference of country roads which is now Harvard Square, and enquired for someone to show him the way to Lexington Farms. In all the College there was to be found only one loyalist, and ‘Mr. Tutor Smith under­ took the duty. At the close of the events of April 19, however, Mr. Tutor Smith did not return to Harvard College, and under date of Nov. 7 there is a memorandum as follows: “The President communicated a letter from Mr. Tutor Smith, who is now absent in England, signifying his resignation of his office in the College.”

“That the President, by public advertisement, notify the students of Harvard College to come together at Concord in this Province on the first Wednesday of October, where all necessary provision is made for their reception, and they will have boarding and chamber furniture at a reasonable rate.”

This vote is followed by an ominous vote 2: “That there be no fall vacation this present year.” Books and apparatus was boxed up, and the college emigrated with its scanty possessions to the chill comfort of a New England meeting-house, leaving its academic halls to the mercy of the farmer boys and frontiersmen who had undertaken to purge Boston of the British.

In April of 1776, at the same meeting which voted an honorary degree to “His Excellency, General Washington, for his eminent services to the cause of his country,” a memorial was prepared for the General Court. It tells its own story. 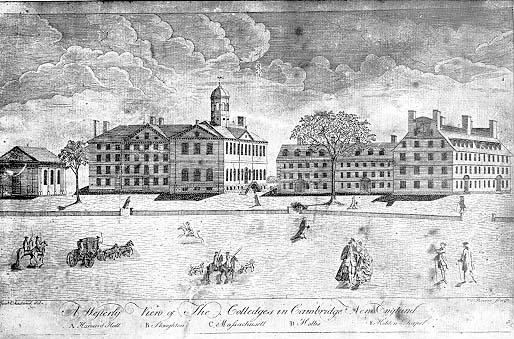 “That immediately after the Commencement of the present war in defense of American Liberties on the 19th of April, 1775, all the Buildings and appurtenances of the College were entered, and ever since •have been occupied by the army then suddenly assembled and formed, as Barracks.

“That said buildings are greatly defaced and damaged by the army, so that the repairs must amount to a considerable sum.

“That not only the Rents, but likewise one year’s income of Charlestown Ferry, granted by the General Assembly of the Colony to the College, have been cut off by this war; said Ferry being in Possession of the Enemy.

“That since, by the signal smiles of Heaven on our military operations, the Enemy’s fleet and troops are driven from the Capital, and the Continental forces are now removed from Cambridge; and since it is necessary that the students should return as soon as possible to their proper seat, we consider it expedient to apply ourselves to this Honorable Court that the College Buildings and Fences may be re­ paired, and this literary society compensated for the great Losses it has sustained.”

The complications which attended the removal of the college go echoing off down the records for some pages, as for instance:

“Henley, who, till the Dispersion of College in April, 1775, was a member of the present Senior Sophister Class, but has not been a resident at College since that time, now applying for a degree with his class; and we, being informed by Dr. Sayer of Newbury Port, that he has been with him in the Study of Physick the greater part of the time since, and that his behavior is such as becomes a Student, Therefore, Voted: “That Henley be admitted to the degree of Bachelor of Arts.”

The Class of 1777, numbered 42, and a number of the names on the roll are duplicated in the present senior class.

Another echo of the Concord episode occurs in connection with the payment of gallery money. Pews were reserved in the Cambridge meeting-house for the Scholars. The plan was at first to pay the rent by the Sabbath collections from the Scholars. This plan did not work at all. So the rent was charged on the regular “Quarterly Bills.”

Just ten days before the signing of the Declaration of Independence, the Corporation voted:

“Ten pounds to the Town of Concord for the use of the meeting house while the college was there, the sum to be paid into the hands of the Selectmen as soon as the gallery money charged in the Quarter Bills for the present year can be collected.”

The absence of Hancock was still causing agitation at these meetings of the Corporation. Hardly a meeting passes in which some reference is not made to the “absent treasurer.” President Langdon writes to John Hancock, Esquire,

“That it is a great unhappiness to the College that the Treasurer’s good services are interrupted by the important business of his present high station; that we feel the necessity of having the Treasury open, and do not object to the proposal of Mr. Wm. Winthrop, but that we must refer it to himself to judge whether it will be necessary for him to resign his office.”

Six months later, John Hancock not having given any signs of life, in November, there is an annotation to the effect that ”David Cheever, Esquire, Capt. Nathan Adams and Samuel Freeman, Esquire, be empowered to receive of the Hon. John Hancock, Esquire, now at Philadelphia, all the obligations and securities in his hands belonging to said college.” One month later, the matter is still hanging fire, and the solemn conclave “at Dr.

Appleton’s” decrees: “That Mr. Tutor Hall be empowered to go to Philadelphia to receive of Hon. John Hancock, Esquire, all the papers of the College.”

It is added in a note:

“N.B. – Mr. Hall, being present, engages to go in consideration of the College defraying his expenses on the journey.”

In January there is a final despairing vote:

“That laster Stephen Hall is directed to proceed to Baltimore or to any other place where Mr. Hancock, the college Treasurer, may be.”

Master Stephen Hall at last started, but proceeded very cautiously and deliberately. The hazards of inn life in 1777 were an item to be taken into account by a gentleman who wished to arrive at his destination unsearched. While he sat toasting his toes before mine host’s blazing hickory logs with a tumbler of steaming toddy at his elbow, a troop of horse was as likely as not to jingle up and dismount just at nightfall and own the tavttn for the night with a tyranny which ranged anywhere from jest to earnest. President Langdon’s instructions to the emissary conclude:

“But as General Washington’s late successful action may clear the back roads of the enemy and render traveling much safer, it will be best to conceal your business as much as possible, only endeavoring to• get recommendations to private Gentlemen from stage to stage, to avoid Public Houses where you may be exposed to dangers.”

The errand was satisfactorily completed in July of 1777, and the “Corporation proceeded to elect a Treasurer in the Room of the Hon. John Hancock, Esquire, whose employment in the American Congress unavoidably prevents his attending to the business of that office,” and “by their written votes, it appeared that Ebeneezer Storer was chosen.” Accordingly, two days later, on the 16th of July, 1777, Ebeneezer Storer affixed his first official signature as “Treasurer,” only he wrote it “Thesauraurius,” and struck a line through one “au” with the quill. Then new honors come upon him Like our strange garments, cleave not to their mold But with the aid of age.

The Hancock episode was closed, and the black-browed divines settling their white ruffs once more, turned to a detail of academic discipline, which comes like a touch of contemporary nature into the grim annals of colonial rebellion.

“And no Person shall be admitted into the Freshman Class after the usual time of admission, unless it shall appear to the satisfaction of the President and Tutors that the person has been prevented coming at the proper time by sickness or some other peculiar Providence.”

The unanimous vote establishing the Boston Committee of Correspondence [on 3 November 1772] was a victory for the Boston Whigs. The governor's friends had tried to discourage interest in the meeting, and had themselves deliberately stayed away. Thus they left the field free to their opponents, a move which had significant results. Had the administration's supporters been present, division would have replaced unanimity in the town votes, and even more important, the membership of the committee might not have been so homogeneous in its opposition to the administration. In that event the work of the committee and indeed its entire career might have been very different. As it was, the committee would become a major vehicle of opposition to the royal administration and all it signified.
Upcoming Events
Feb
19
Sat
9:00 am 2022 Annual Meeting @ Harvard Club of Boston
2022 Annual Meeting @ Harvard Club of Boston
Feb 19 @ 9:00 am – 4:00 pm