(508) 229-1776 compatriots@massar.org Member Login
TwitterFacebookGoogle PlusPinterestVKInstagramLinkedInFlickrVimeoRSS
Spain and the Independence of the United States

Spanish forces overran the British lines
during the climactic
Battle of Pensacola (1781).

In December 1785, George Washington, “recently retired to the country life,” wrote to the Spanish minister of state asking him to thank King Carlos III for his gift of two jackasses. The future first president of the United States was sincere in his appreciation in more ways than one, for he knew that Spain had spent at least seven years sending supplies and money to help the British American rebels succeed in what must have appeared to be an impossible dream—independence and the formation of the United States of America. Moreover, beginning in June 1779, with the Spanish declaration of war against Great Britain, Spanish men from the peninsula and throughout the Americas fought in the conflict that is known in the United States as the American Revolution. In addition, the overall Spanish strategy is what finally resulted in the defeat of Great Britain and the independence of the United States.

Without Spain’s involvement, the consequences of the war would have been vastly different. All the leaders— from George Washington to the French Minister of State, the Count of Vergennes —knew that Spain was vital to the cause. The powerful Frenchman advised his king not to enter the war unless Spain was committed as well. France, he knew, needed Spain to assure victory. Washington noted that Great Britain would pay for its “obstinacy” when “France and Spain should unite and obtain a decided superiority by sea.”

Eventually, Washington’s observation was exactly correct. But first let us look at some details. Spain contributed more money and supplies to the cause than any other country. A large portion of supplies and money that came from France actually originated in Spain. A large percentage of that support originated in what is today Mexico, which then included the present states of California, Arizona, New Mexico and Texas. residents in those areas supported the war with a special tax. The people of New Mexico paid a total of 3,677 pesos ($110,300); and the people of Sonora, which included Arizona, paid 22,420 pesos ($672,600), 629 pesos ($12,870) of which came from the hard-pressed little village of Tucson. ¢California paid a total 4,216 pesos ($126,480).* Texas responded with what is reputed to be the first Texas cattle drive. The cattle were driven overland to feed the Spanish troops in Louisiana.

The Spanish Catholic Church collected millions of dollars from its various cathedral chapter houses. Spanish bankers, especially the Basque firm of Gardoqui and Sons, laundered money to the colonies. Some of the support avoided the British blockade to travel directly to the Continental Congress. Other support was filtered through Havana, Cuba, to Spanish New Orleans and up the Mississippi and Ohio rivers to the Continental Army. 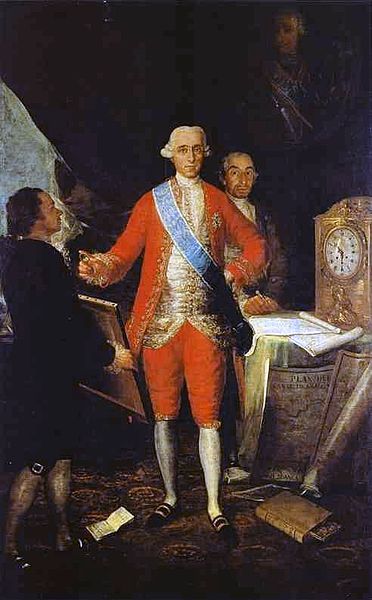 The specter of a Spanish and French alliance on the side of the rebelling colonies was daunting in the eyes of Great Britain. Spain even tried to negotiate a peace before entering the war. The idea of American independence was never compromised. Upon hearing word of Spain’s failure to negotiate a peace, Washington wrote to john jay that Britain “is more strongly tinctured with insanity than she has done in the course of this contest.”

As Washington realized, the combined Spanish and French fleets put Great Britain’s fleet in jeopardy. This superiority allowed the European allies to force the British “to make some hard decisions,” for they opened up fronts from the Rio de la Plata in South America, to the Mediterranean Sea, to Central America, the Caribbean Sea and the Gulf of Mexico. Spanish forces out of Spanish-held St. Louis traveled through a winter’s snow and ice to sack and burn the British fort St. Joseph in southern Michigan. In short, Spain’s entrance into the conflict turned it into a world war that stretched the British resources to the breaking point.

Thus, for example, even before Spain’s declaration of war, Spain sent the largest armada of the conflict to attack British and Portuguese establishments in South America. At the same time, Spanish squadron sailed up the Tajo River, where it anchored in front of Lisbon with guns prepped and aimed. These moves eliminated Portugal as a British ally. After Spain entered the war, a joint 22,000-man army laid siege to Gibraltar. That siege lasted throughout the war and each time Great Britain used its navy in an attempt to lift the siege, France and then Spain sent troops and supplies to America unhindered. In America, French troops were sent to the northern theater to fight with the colonials while Spain opposed the British in the Gulf of Mexico and Caribbean Sea. Like a player in a great chess game, Spain proposed a strategy to force the British to make some hard decisions.

The British had to decide what was more important: their Central American operations, the West Indies trade, their holdings in the Mediterranean, their recently won possessions in India, their Portuguese alliance, the rebelling 13 colonies and/ or their homeland. The combined Spanish and French naval fleet gave them and the Americans the advantage.

Spanish forces engaged and defeated British forces on the Mediterranean island of Minorca; in Central America, where some of the most vicious fighting took place; and along the Mississippi River and Gulf Coast, where the British where defeated at St. Louis, Baton Rouge, Manchac, Natchez, Mobile and Pensacola. Spain then went on to take the Bahamas from Great Britain. Finally, two years after Spain’s entry into the war, a feigned attack on Great Britain itself is one reason why Lord Cornwallis and the British army were defeated in the decisive battle of Yorktown.

Not surprisingly, the British fleet was called home to protect the islands from a feared attack. The fleet’s departure left the British land army stranded in Virginia at Yorktown. The opportunity had arrived for a decisive victory. However, there were some logistical as well as financial problems. Generals Washington and Rochambeau had their combined armies outside of New York and would have to march south. The French fleet under Admiral de Grasse had just arrived at Cap-François in the Caribbean and would have to sail north. All the commanders agreed that “they could not waste the most decisive opportunity in the whole war.” At Spanish insistence, Grasse agreed to sail north with 26 ships-of the- line escorting 5,000 French reinforcements. Grasse agreed to this move because the Spanish agreed to use their Caribbean fleet to protect the French possessions.

The problem of financing the action was another matter. Francisco Saavedra, the Spanish strategist working with Grasse, insisted that while Grasse headed north, he would sail to Havana to collect the necessary funds. Grasse trusted the Spanish official enough to agree, and the two men embarked during the season of “doldrums and hurricanes,” while the combined French and American armies marched south, all with the same goal—to trap and defeat the British army at Yorktown.

Saavedra arrived at Havana to find that the Spanish command had ordered one-million pesos to be paid to the French one-million pesos to be paid to the French but that the “treasure fleet” from Mexico had not arrived. Rather than wait, Cuba’s intendente declared an emergency and in little more than six hours collected 500,000 pesos from the citizens of Havana. The money was loaded onto a fast frigate and sent north to Grasse. Five days later, the one-million pesos from Mexico were sent north “as a new service from Spain to help in our common cause.” The rest is history. The British were defeated, and for all intents and purposes the war ended. In part, the victory was the result of a Spanish strategy delineated by the Spanish and French commanders in the Caribbean within the general parameters laid out before Spain entered the war. In addition, the culminating Battle of Yorktown was funded with a line of credit that extended from Mexico through Cuba. Grasse later wrote that the money provided by Spain might in truth be regarded as “the bottom dollars” upon which the edifice of American independence was raised.

Even Benjamin Franklin working in Paris with both the French and Spanish, understood the key role Spain played in the outcome of the conflict. Sent to Paris with papers naming him minister plenipotentiary to Spain, he understood the value of Spain’s unique role by staying in Paris and dealing with the Spanish ambassador. While arranging for Spanish money to be laundered through France, Franklin instructed American corsairs, including John Paul Jones, raiding the British coasts to take their booty to northern Spanish ports where they could rest in safety, have their ships repaired, and sell their goods at exaggerated prices, the money from which would support the cause of independence.

Note: this article is excerpted and paraphrased by the author from his book Spain and the independence of the United States: an intrinsic gift and is roughly based on an address he gave to the 2012 national ¢congress of the sons of the American Revolution in Phoenix, Arizona.

* The dollar figures roughly match the value of the dollar in 2000.

The Crossing of the Dan Documentary

". . . you are to consider the people of this province absolved, on their part, from the obligation therein contained [the 1691 Massachusetts charter], and to all intents and purposes reduced to a state of nature; and you are to exert yourself in devising ways and means to raise from the dissolution of the old constitution, as from the ashes of the Phenix, a new form, wherein all officers shall be dependent on the suffrages of the people, whatever unfavorable constructions our enemies may put upon such procedure. "