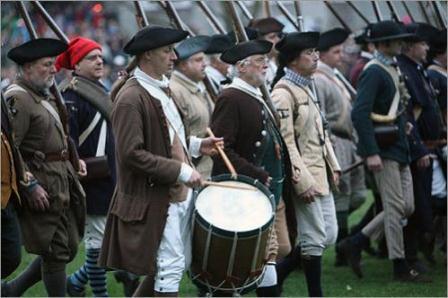 This is a story largely untold, unknown and under-appreciated. It began in the wee hours of the morning of September 6, 1774, seven months before the first shots were fired at Concord and Lexington. That day, 4,622 militiamen from 37 Worcester County towns in Massachusetts marched to Main Street in the town of Worcester, determined to shut down the courthouse before the new Crown-controlled courts could open to sit for a new session.1

Thomas Gage, commanding general of British forces headquartered in Boston, was just as determined to keep the Worcester courts open. General Gage had vowed in an August 27 letter to his superior in London, Lord Dartmouth, “I apprehend that I shall soon be obliged to march a Body of Troops into that Township, and perhaps into others, as occasion warrants, to preserve the peace.” Gage further acknowledged, In Worcester, they keep no terms, openly threaten resistance by arms, have been purchasing arms … and threaten to attack any troops who dare to oppose them.2

General Gage already knew that 1,500 insurgents in Great Barrington had forced the closure of the Berkshire County courts on August 16. He also had been notified that on August 30, about 3,000 patriots in Springfield in a show of force had shut down the Hampshire County courts before they could transact any legal business. There seemed little doubt that if there were to be a military confrontation it would happen in Worcester, the most radical of all the countryside counties.3 Strategically speaking, Worcester, located some 45 miles west of Boston, stood as the gateway to the agrarian countryside of western Massachusetts and the Berkshires.

The countryside courts symbolized civil authority and the rule of law to the rural colonists, more so than the other more remote branches of government located in Boston.4 The point of contact with government for middle-class farmers, shopkeepers and craftsmen was primarily the county courts. These small property owners in Worcester, anxious to protect their farms, stock and personal possessions from the ever present claims of creditors, demanded that the courts be run, as they had been, by officials ultimately accountable to the voters through their representatives, and not to court officers beholden to the Crown.

By September 2, General Gage had actually begun to rethink the wisdom of his vow to march on Worcester. Informed by his spies and weighing the risks, he confided his misgivings to Lord Dartmouth in a letter that day. Gage acknowledged that he had intended to send his army to Worcester to protect the courts, but had been informed “from undoubted authorities that the flames of sedition had spread universally throughout the country beyond conception…and that no courts could proceed on business.”

As dawn broke on the morning of September 6, an advance party of militiamen seized the Worcester courthouse, barricaded themselves inside, and awaited the arrival of 25 Crown appointees. That morning, the well-organized, well-trained, and highly disciplined militia force of nearly 5,000 men poured into the Main Street area in front of the court building, assembling themselves into 37 town military companies. A large majority of the town militias had prudently voted the previous day to leave their firearms outside the town, so as not to provoke any unexpected violent incidents.5 The militia lined both sides of Main Street, forming a kind of gauntlet for the King’s appointees to pass through. When the court officials arrived at the courthouse, they were denied entry and escorted to the nearby Daniel Heywood Tavern, where they were to await further instructions.

All 25 court officials, faced with 4,622 hostile militiamen, knew well the stories of patriots tarring and feathering Tories who they viewed as traitors to their cause, the ransacking of their homes, and even the occasional use of death threats.6 General Gage and his troops were nowhere to be found in Worcester that day. Left to their own devices, the Crown’s appointees reluctantly signed documents disavowing their appointments by King George III. The court officials were then marched publicly, hat in hand through the gauntlet, in a procession toward the courthouse, recanting out loud their oaths of office and repeating their disavowals as demanded by the assembled militiamen.

Following the September 6 debacle, General Gage had no choice but to admit to Lord Dartmouth, Civil government is near its end, the Courts of Justice expiring one after another.7

The spectacle of the Worcester rebellion against British authority and public humiliation of its officials, sent a shock wave across the Massachusetts colony, all the way to Philadelphia where the First Continental Congress was in session. Worcester’s militiamen had irreversibly set the stage for an inevitable later, larger confrontation with the British military. In the meantime, colonial forces had exceeded even the most optimistic expectations of the patriot resistance movement.

A few words are in order about the train of events that precipitated the revolt of September 6 – there is no mystery here. It was triggered by the Boston Tea Party the night of December 16, 1773, when 100 local patriots unceremoniously dumped 432 crates of East India Company tea into the Boston harbor. Patriots in the 13 colonies were exhilarated by news of the bold maneuver, viewing it as a telling blow for liberty. John Adams called it, the grandest event, which has yet happened since the controversy with Britain opened.8

The British, of course, viewed it as something else. King George III, his Cabinet and Parliament were shocked and infuriated by such brazen acts they considered to be the wonton destruction of private property. The British government promised swift and harsh punishment for those responsible.

The promised punitive measures did not take long to unfold. What the British thought, in the first instance, was an appropriate response to put the rebels in their place, turned out to be a pivotal miscalculation that actually stiffened colonial opposition to the Crown and provoked rage across Massachusetts. It is agreed that popular fury was never greater in this Province than at present, General Gage acknowledged in a letter to Lord Dartmouth.9

In a nutshell, the British Parliament in the spring of 1774, enacted a series of bills that became known in England as the Coercive Acts, and in America, as the detested Intolerable Acts. Some of the key provisions included:

To leave no doubt as to who would be in charge of the colonial government of Massachusetts , the Crown’s civilian Governor, Thomas Hutchinson, was replaced by General Thomas Gage, who would act both as Governor of the colony and military commander of British armed forces. On June 17, Governor Gage proceeded to dissolve the two-house legislature of Massachusetts, depriving the rambunctious colonists of their long-held right to representative government.

In effect, the Massachusetts Government Act unilaterally revoked 150 years of self- government under charters granted by the British monarchy in 1629 and 1691, guaranteeing the colonists the same rights and liberties as British subjects as Englishmen held in the mother country. The colonists viewed the 1691 charter as a “sacred covenant,” serving as a` constitutional framework for individual liberties and representative government. It absolutely could not be changed without their consent, they strongly believed. A Worcester County meeting of Committees of Correspondence resolved on August 9, 1774 “that an attempt to vacate said charter, by either party, without the consent of the other, has a tendency to dissolve the union between Great Britain and this province, to destroy the allegiance we owe to the king, and to set aside the sacred obligations he is under to his subjects here.” That view was underscored by an even broader multicounty convention of town Committees of Correspondence meeting in Boston on August 27, which issued a report declaring unequivocally: No power on Earth, hath a Right without the consent of this Province to alter the minutest title of its Charter.11

An intelligence report to General Gage from a leading Worcester Tory, Timothy Paine, captured the passionate feelings of the colonists about the Massachusetts Government Act. Paine wrote of his dread of the p>consequences of enforcing the MGA by a military power; people’s spirits are so raised they seem determined to risqué (sic) their lives and everything dear to them in the opposition, and prevent any person from executing any commission he may receive under the present administration…And that the County Court shall not be held in Worcester.12

Considering the memorable events of September 6, 1774, it remains a mystery why the City of Worcester has yet to honor or commemorate such an extraordinary day, unique to America’s heritage. Unlike Worcester, the towns of Concord, Lexington and their surrounding communities proudly celebrate their revolutionary heritage with painstakingly authentic reenactments, eloquent narratives of the events, and colorful parades in honor of the historic battles fought on April 19, 1775.

Worcester is second only to Boston as the largest city in Massachusetts. It already is known for notable historic events. It was the site in 1781 of the first court cases banning slavery under the new Massachusetts constitution of 1780. The first women’s national convention was held in Worcester in 1850, following the groundbreaking Seneca Falls, New York Declaration of 1848, calling for equal rights for women.

Taking note of the odd revolutionary historical vacuum that persists in Worcester, a local initiative was launched in 2012 to organize a commemorative day for September 6, 1774, to be held on that date in 2014. The initiative encompasses the following core group of revolutionary, historical and cultural organizations: Massachusetts Society of the Sons of the American Revolution, Worcester Daughters of the American Revolution, Preservation Worcester, and the Worcester Historical Museum.

The Worcester story has not gone unnoticed. On April 21, 2012, the national Congress of American Revolution Round Tables, meeting in New Castle, Delaware, unanimously passed a resolution declaring:

The Second Congress of American Revolution Round tables expresses its support for the initiative underway to commemorate the remarkable events that took place in Worcester, Massachusetts on September 6, 1774.

After the passage of 238 years, the timing has never been better for Worcester to recognize and honor the courageous militiamen who boldly contested British authority on September 6, 1774 and won.13

Dr. Bernstein also serves on the Executive Board of the Lifelong Learning Institute at Tufts University, where he has taught courses on “The Uniqueness of American Political Thought” and “Historical Foundations of the American Way of Thinking.”

Why Is America Exceptional?

Why Is America Exceptional? By Matthew Spalding, Ph.D. ( From The Heritage Foundation) In 1776,…