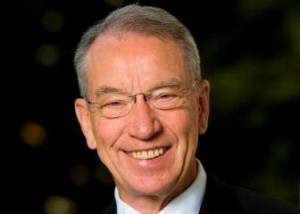 Senator Grassley has held his Senate seat since 1980 and has served on many committees including Agriculture, Judiciary and Budget. He ranks 17th in seniority in the US Senate and is currently serving as the Chairman of the Senate Finance Committee. The Senator has been a long time member of the SAR.

“Mother and Dad always talked about history and politics at the dinner table.” They were strong on good citizenship and were very interested in history and politics. I was taught to be active in civic affairs and to have a political opinion on most matters. People told me that all politicians were crooks and asked why I would want to be one. I knew that was not the case and that public service was the right thing to do. “My political career wasn’t planned. It just kind of evolved.” I was politically active in high school, spent 16 years in the Iowa legislature, from there to the US House of Representatives and then to the US Senate.

Your position as chairman of tlze Senate Finance Committee makes you a key player in the President’s plan to reform the Social Security System. Do you think that the kind of reform proposed by the President can be passed by this congress?

“No, and I am sorry to say that.” Everyone knows that the Social Security system is in trouble and that it will reach a crisis point about 2015. There are mathematical solutions available and reason tells us that the longer the delay in making changes, the greater the bill will be. “If we do it today instead of tomorrow, it is $600 billion cheaper spread out over 75 years.” I don’t know why we can’t face this reality but the political will for reform is not there. When the crisis comes, then the Congress will act and the cost will be high.

Given the recent tragedy in the Gulf Coast area and the higher gas prices, do you think that the passing of the Energy Bill will really help alternative fuel development in this country and how?

“God only made so much fossil fuel and it is a finite quantity and it is running out.” We need to develop more home grown energy to make us less dependent on foreign oil and on the concentration of production in our gulf coast area. America is currently working hard to produce fuels from our renewable domestic grains production Ethanol type products play some supply role now and are significant in providing alternative domestically produced energy.

How did you get into the SAR and are members of your family in the SAR, DAR, or CAR?

My wife and two daughters are in the DAR. It was my brother’s widow, Marjorie Grassley of Boone, IA, who did the necessary research and application work to get me into the SAR. Anytime you really want to know more about me as an individual, she would be the right person to interview.

What is your position on the preservation of historic sites– especially American Revolution sites?

I don’t think that I have a formal position per se. I have since childhood had a great regard for preserving our history. I give ad hoc consideration to all historic preservation issues and really thnk the concept of historical district preservation is essential. “I have been involved in legislation for tax exemptions for things that maintain historic districts for example.” This approach puts the individual historic site or building in the context of its place and time and greatly increases the value of the preservation.

The Sons of the American Revolution support many youth programs which seek to urge young Americans to make public service apart of their lives. As a public servant, what advice would you give young people regarding opporturzities and training for their adult lives?

“Start with an attitude that one person can make a difference.” Yes, some will make a greater or lesser contribution for many reasons such as opportunity and abilities, but all can make a difference. Your impact on others may often be unknown to you but a good example may be an inspiration to many. To enter public service, each individual needs to be prepared for that service and for the demands of public office.. “Be a missionary for your cause.”

What can we do as SAR members to educate, promote and ‘krow” our organization so we can be more effective?

“Don’t just talk to and among yourselves-Get out into the community and talk to people .. .” You must get into the community at large and tell them about your purpose and goals. Relatively few people know much about patriotic societies. Communicating with the public now is especially important “We live in such a secular world. What makes America different from any body else is our political beliefs came from God.” Our founders knew and stated that the rights of the people were from God, not from government. “Our nation needs a return of spiritual emphasis.”

Senator, you have served Iowa, as a US Representative and since 1980, as Senator. Do you have thoughts about a higher office?

If you leftpolitics, would you farm, teach or do something else?

I would return to the farm which my son Robin is now operating and become an active farmer again. I would also look to do some teaching.

Other than levees and dams, what other ways does Iowa have to control flooding?

About all that is left is wetland restoration to reduce water and farm chemical run off into our rivers. There is still marginal land, even in Iowa, that can be placed in wetland programs for everyone’s benefit.

Senator, do you have any other comments or questions? Just one, where will you publish this interview? In the SAR Magazine.

Well I would hope that you will get out into the community and make them aware of your programs and what you do for America.

Over the past decade, many who have attended a patriotic rally may have had the…