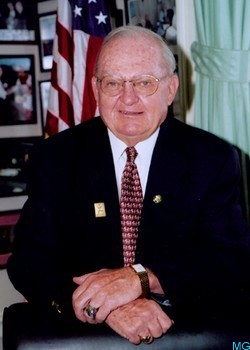 Congressman and Compatriot Howard Coble, Republican from the 6th district of North Carolina, and members of the NSSAR Congressional and Governmental Relations Committee met November, 02 at his office to talk about Congressman Coble’s long service to his congressional district. Committee Chairman Timothy R Bennett was accompanied by Historian General Bruce Wilcox and Andrew M Johnson of the DC Society.

Congressman Coble, a native North Carolinian, was elected to the House on 6 Nov 1984, after service with the US Coast Guard and several terms in the North Carolina House of Representatives.

Warming to the first question asked by Mr Bennett about his first interests in politics, Congressman Coble note that ‘Back in those days, North Carolina was as a practical matter, a one-party state. In many parts of my state, if you weren’t a Democrat, you couldn’t get a job as a public school educator. You couldn’t get a job driving a pickup truck for the Department of Transportation or be the custodian of a school. And I am sure that there were states where this was equally true where the Republican Party was in control. I thought that it was unfair, since these salaries were subsidized with taxpayer money and that it was unfair to have a litmus test of party affiliation before you got the job. That is what really prompted me to join the Republican Party.” He went on to say that “My momma and daddy were both Democrats When I first ran for the state legislature, my mom and dad couldn’t vote for me in the primary. My mom changed her affiliation the next week. My daddy never changed until I ran for Congress.”

The Congressman currently serves on the House Committee on Judiciary and the Committee on Transportation and Infrastructure. He acknowledged that America has some problems in its transportation system. “1 have the fear that both the infrastructure of highways and bridges specifically is becoming more and more deteriorated…. Back home, when I cross a bridge particularly in a rural area, it just looks unsafe. I just kind of hold my breath until I get to the other side. I’m sure that is the case from sea to sea and border to border. We have to have money to do it and it is not an inexpensive operation to address… I think elected official need to continually remind people-Lets take better care of our infrastructure. We need to provide the necessary money to do this.”

The teaching of American History in our schools has come under attack by many and most notably by President Bush. The Congressman agreed that” … elected officials need to speak openly and frequently about the importance of teaching history. The President is right about that. I think that teaching history needs to be moved to the top shelf. You know that at one time history was a top shelf discipline. With the passage of time, and in this high tech era, there may be a feeling that history was so long ago and that technology has a higher importance. That is a mistake that needs to be corrected and I think that public officials need to use their bully pulpit to remind the populace that we do not mean to abandon the teaching of history.”

Mr Coble is also a friend of historic preservation. “We cannot allow Americana to be destroyed at will. Today, so often people abandon or reject old sites and I say that these places, often times, are rich in history and memories and I believe that preserving these historic sites serves a good purpose. Guilford Courthouse looks better now than it did five or six years ago. I think that I had a little bit to do with that.”

Do you need to be a lawyer to be successful in politics? Mr Cobie would agree it may give some advantage but there are many other disciplines, such as business experience, that would serve as well. “I think that anything we do prior to getting to Congress that would sharpen our sense of responsibility and our sense of concern is beneficial but I do think that legal training helps.”

Would you encourage family members to run for Congress? Mr Coble, a bachelor, had an interesting answer: “As far as encouraging members of my family to become members of Congress; that would be difficult to do as far as my immediate family since I am a bachelor. But I would encourage people to consider Congress if they are so inclined. Being a bachelor and not having an immediate family probably makes me more flexible in discharging the duties of my office, I think that I have been able to devote more time to my congressional duties than I would if I had a wife and a couple of kids, I would tell anyone I would encourage to come up here to first run it by your spouse. Be sure she sis off on it. Keep in mind that if you have children, especially small children, that there will be all kinds of scheduling problems.’