The weather could not have been more accommodating when more than 190 Compatriots and camp followers gathered in Pennsylvania September 14-15 to commemorate the 225th anniversary of the signing of the United States Constitution.

The SAR celebration was sponsored by the National History Committee and the Pennsylvania Society, hosted by the Philadelphia Continental Chapter and organized by Jim Willis. President General Stephen Leishman recognized the chapter and Compatriot Willis for their support of the event. Celebrants came from as far away as California, Texas, Florida and Missouri to take part in the program. Twenty-two states and the District of Columbia were represented, as well as all 12 states that signed the Constitution.

The festivities began Friday night with a reception at the event hotel in King of Prussia. Noah Lewis, a local entertainer, gave an interpretive program showcasing Ned Hector, a black soldier who fought in the Revolutionary War battles of Brandywine and Germantown. Lewis also led a spirited jollification featuring Lindsey and Billie Brock, Mike and Cilla Tomme and Sam Powell, who learned the intricacies of manning a cannon during the Battle of Brandywine.

On Saturday, those who brought uniforms and period clothing got ready for the featured attraction of the celebration, a three- block parade down the Green from Independence Hall to the National Constitution Center in the center of Old Town Philadelphia. Five school buses transported the motley crew from the hotel to historic Independence Hall.

The color guard marched to a position in front of Independence Hall to be welcomed by Independence National Historic Park Superintendant Cynthia MacLeod. Jack Sholl, a member of the SAR and a volunteer at the park, came all the way from San Diego, Calif., to present a program on where the Constitution was written and signed.

Next came the parade from Independence Hall, where the Constitution was signed on September 17, 1787, to Constitution Center. Throngs of visitors lined the three- block Green between the two buildings and cheered as the marchers passed in review.

The National Constitution Center program featured a stirring rendition of our national anthem by Constituting America students Annie Nirshel and Jessie Liz Clement; a presentation by Ralph Archbold, portraying Ben Franklin; and an explanation of the Sworn Again America program, after which everyone attending repeated the Sworn Again America pledge. 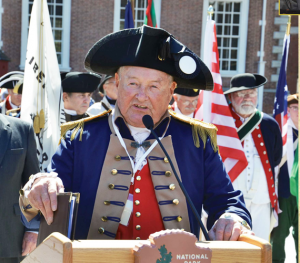 The two-day national program came to an end Saturday night following a gala informal banquet at the hotel in King of Prussia. President General Leishman was the keynote speaker and received a standing ovation after his talk about the Constitution.

While the Philadelphia program was the focal point of the SAR’s national celebration, chapters and state societies throughout the country did their part to observe the 225th anniversary of the U.S. Constitution. We have reports of events in Alabama, Florida, Georgia, Louisiana, Massachusetts, Mississippi, Nevada, Ohio, Tennessee, Texas, Virginia and Wyoming.

The Wiregrass Chapter of Alabama hosted its annual program September 17 in the southeastern city of Enterprise, with five SAR chapters and six DAR chapters participating. Next door in Mississippi, U.S. Sen. Roger Wicker, a member of William Gray Chapter in Tupelo, issued a press release in which he said, “The Constitution’s spirit of ‘We the People’ calls on every American citizen to be informed and active participants in the democratic processes of our government. In honoring Constitution Day, we celebrate one of the greatest moments in American history, and we ensure that the many ‘Blessings of Liberty’ are not forgotten by this generation and those to come.”

In Georgia, the Marquis de Lafayette Chapter participated in bell ringing at the Fayette County Courthouse at noon on September 17. The Piedmont Chapter purchased framed copies of the Constitution and presented them to schools and city halls in its coverage area. And the Lyman Hall Chapter joined hands with the Col. William Candler DAR Chapter to receive a proclamation from the City of Gainesville.

In the West, the Signers Chapter in Henderson, Nev., held its annual Constitution Day Dinner September 17. The Wyoming State Society also met in Cheyenne on September 17, with Cheyenne attorney Ron Triggs speaking on the 1787 Constitutional Convention.

The TXSSAR delegation to Philadelphia used the occasion to arrive early and mark the grave of New York Artilleryman Capt. James Moore. He is buried near the Thompson- Neely House at Washington Crossing Historic Park in Bucks County, Pa. Back in Texas, the Heart of Texas Chapter was successful in obtaining a proclamation from the City of Killeen.

September 15 was the day Tennessee conducted its annual Gathering at Sycamore Shoals program. This year, more than 100 people from eight states assembled at Fort Watauga to celebrate the gathering of Over Mountain Men in September 1780 in preparation for their attack on Kings Mountain, S.C., the following month. A proclamation commemorating the U.S. Constitution, issued by Tennessee Gov. Bill Haslam, was read aloud and the group acknowledged U.S. Senate Resolution 376, which also commemorated the achievement of our inspired leaders in 1787 who worked together to institute the greatest Constitution the world has ever known. The latter resolution was written by Compatriot Bill Allerton of Louisiana.

In Virginia, the SAR held its semi-annual meeting in Charlottesville September 14-15 with the program emphasis on the 225th Anniversary of the U.S. Constitution. During the two-day meeting, proclamations were read from the mayors of Charlottesville, Culpeper and Fredericksburg. And in Massachusetts, Jack Manning and Sheila Manning, town administrator, were instrumental in getting the town of Scituate to issue a proclamation commemorating the 225th anniversary of the U.S. Constitution.

The 2014 SAR Annual Conference on the American Revolution

During a period of significant disruptions in daily life and changed expectations of what a woman’s place in a marriage, the household, and the community “ought” to be, women assumed multiple roles. They displayed patriotism by supporting boycotts of British goods and encouraging manufacturing at home; they raised funds to feed and clothe the troops; they supported the family by managing the farm or family business while a husband fought. Some followed the armies in supporting roles; and some were soldiers.

The 233rd anniversary of America's decisive Revolutionary War victory at Yorktown will be marked with a variety of engaging programs and tours on Saturday October 18th — Yorktown Day — in historic Plimoth Plantation, 137 Warren Avenue, in Plymouth from 9:00am to 2:30pm. Yorktown Day marks the anniversary of the American-French victory in 1781. In 1781, following a nine-day bombardment, British forces in Yorktown under General Charles Cornwallis requested a cease-fire and then surrendered more than 8,000 soldiers and sailors to the combined American and French armies commanded
Upcoming Events
Feb
19
Sat
9:00 am 2022 Annual Meeting @ Harvard Club of Boston
2022 Annual Meeting @ Harvard Club of Boston
Feb 19 @ 9:00 am – 4:00 pm