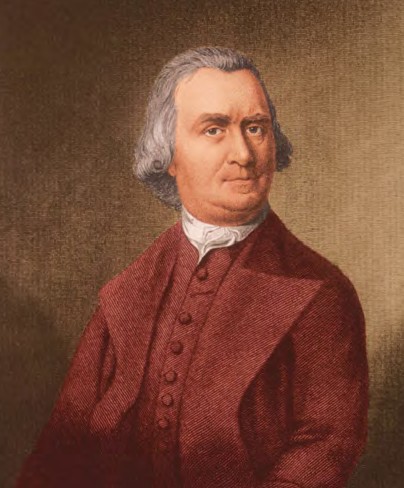 Cobalt blue and red-orange flames lapped the timbers of an office building. Two human forms lay crushed beneath the beams. A crowd stood mesmerized as the effigies were consumed. These hay- stuffed articles of clothing represented the detested stamp distributor Andrew Oliver and the Devil. Americans stood united and strong in the face of tyranny. The organizer of this event and the spark for our revolution was the firebrand Samuel Adams.

Born in 1722 in Massachusetts, young Samuel attended Harvard at the age of 14 and became a follower of English philosopher John Locke. They shared the belief that government should not impose taxes without the consent of the governed. Samuel Adams felt passionately that the colonists should be permitted self-governance, and in the years leading to the Revolution, no person did more than Samuel Adams to promote our American independence. He worked toward this goal by writing hundreds of letters to newspapers and political leaders as he highlighted the injustices of the British rule. In 1765, Adams founded the Sons of Liberty, who sent clear messages to the British that their military occupancy was unwarranted and unwelcome.

When British regulars fired on Bostonians, Samuel Adams named the event “The Boston Massacre” and used the “massacre” to arouse the colonists. When the British taxed the purchase of tea, Samuel Adams orchestrated the Boston Tea Party and gave the signal for the dumping of English tea into the harbor. The Boston Gazette, December 1773, printed Samuel Adams’ New Year’s message: “To all Nations under Heaven, know ye, that the PEOPLE of the AMERICAN WORLD are millions strong—countless Legions compose their ARMY OF FREEMEN … Let the Britons’ fear to do any more so wickedly as they have done, for the HERCULEAN ARM of this NEW WORLD is lifted up …”

Adams was truly feared by the British officials, who called him “the most dangerous man in Massachusetts.” When British soldiers were compatriot, John Hancock, the Battle of Lexington ensued. This was the spark that Adams needed to ignite the Revolution. Shortly after escaping, Samuel and his cousin, John Adams, secured George Washington as the leader of the Continental Army. 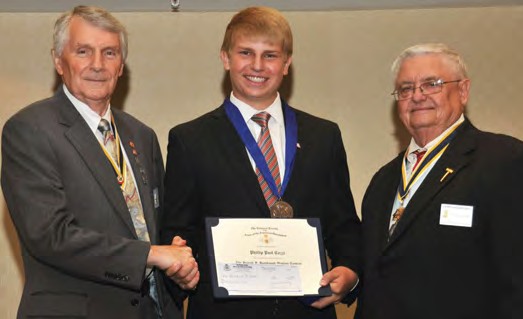 Phillip Cozzi of Illinois is presented the winning oration certificate from Bill Broadus Jr., left, and PG Larry Magerkurth.
Samuel Adams was the quintessential patriot, involved in virtually every major event that led to the creation of our nation. He attended Continental Congresses, signed the Declaration of Independence, and forced the adoption of the Bill of Rights—all while enduring crushing personal losses. He suffered the death of his wife and three of his children as well as the failure of his family brewery. Adams was so destitute at the time of the First Continental Congress that clothing had to be donated in order for him to attend. Despite these hardships, he did all things with great humility, because independence for America was enough of a reward for Samuel Adams. One of his favorite sayings was that his efforts were not for those of his time, “but for the millions yet unborn.”

Fast-forward 225 years: a jetliner leaves that same city of Boston, heads toward New York City and crashes into the World Trade Center. Cobalt blue and red-orange flames lap the beams of an office building as they again fall on human forms. However, this time, those burning are not effigies; rather they are living, breathing human beings. Today, we are still at war, fighting a new tyranny—global terrorism. We Americans today are those Samuel Adams referred to as the “millions yet unborn.” We now need to emulate the political leadership and courage of our forefathers, especially Samuel Adams. He used every resource he possessed: he wrote letters to newspapers and political leaders, AS SHOULD WE. He organized town hall gatherings and participated in national forums, AS SHOULD WE. He held an unwavering faith that America would prevail, AS SHOULD WE. Indeed, we all need to carry on the traditions of this patriot, whom Thomas Jefferson declared “truly the Man of the Revolution,” none other dispatched to apprehend Adams and his fellow than our own remarkable Samuel Adams.