(508) 229-1776 compatriots@massar.org Member Login
TwitterFacebookGoogle PlusPinterestVKInstagramLinkedInFlickrVimeoRSS
The Invention of the Fourth of July

Beginning in the sixteenth century, at times of great controversy over matters of church and state, people in the British Isles began to use official and unofficial anniversaries in order to make political statements. Celebrating – or refusing to celebrate – the monarch could be controversial when questions of dynastic succession or royal or parliamentary policy were at stake. Protestants attacked traditional Roman Catholic saints’ days; kings and archbishops of the Church of England invented new holidays like the King’s Birthday to cement the alliance between the monarchy and the Church of England and in the process helped create an English, and later a British, identity. “Red- letter days,” as they were known because they appeared in red ink in printed almanacs, served as a flexible calendar for what historians call popular politics – the political expressions and practices of ordinary people, sometimes mobilized by officials and organized dissenters. Whether bells were rung, songs sung, sermons given, or the king toasted — and how these actions were carried out — could make a great deal of difference to people who were listening for political meanings. From fasts to feasts and from birthdays to funerals, all kinds of life events were marked by this popular, celebratory politics. 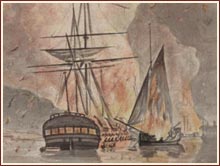 The Phoenix and the Rose
Engaged by the Enemy’s Fire
Ships on 16th August, 1776
(GLC 03008)
British colonizers of North America brought the celebrations, and the politics, with them. By the eighteenth century they began to participate fully in these traditions. In doing so they expressed their very real membership in the British Empire, and, often at the same time, they fought more local battles. By the mid-1760s, when the controversies over the regulation of the empire began to heat up, festivals served as the perfect way to peacefully protest while also spreading the word beyond colonial seaports. Reports of parades and dinners for the repeal of the Stamp Act, for example, were reprinted in newspapers, spreading the modes and the logic of loyal resistance. The greater the numbers turning out for such celebrations, the more the protest movement could claim to represent the people, not just the merchants and tradesmen who would feel the new taxes first. These sometimes daring protests seemed less so when they used traditional rituals, a move that reinforced the patriots’ argument that the protesters were only claiming the traditional rights of Englishmen.

In July 1776, American rebels staged celebrations of independence that were at once spontaneous and at the same time — and in a strikingly modern sense — media events. Independence had already been in the air for at least a year, and the Continental Congress had already declared two national fast days, July 20, 1775, and May 17, 1776. Yet on forwarding the printed Declaration of Independence to the states, Congress did not recommend fasting, mourning, bell ringing, or any other observance. Congress would not order the nation to celebrate its own birth. The new nation could not actually exist until the people had celebrated its existence and the proof had appeared in print, but in fact many colonists did devise celebrations to mark the event.

The Declaration had thrust all blame onto the king, and its public proclamation set off a public, symbolic murder, and funeral, for the king – an inversion of a King’s Birthday celebration. People in New York City tore down the equestrian statue of George III and hacked it to pieces. (It is said that metal bits of it were later used to make bullets.) In other places the monarch’s picture and royal arms were ceremoniously burned. In Huntington, Long Island, people took down the old liberty pole and used the material to fashion an effigy. This mock king sported a wooden broadsword and was described in a newspaper as having a blackened face “like Dunmore’s Virginia regiment” (the slaves who had been invited by the governor of Virginia to help put down the rebellion) and feathers, “like Carleton and Johnson’s savages” (the king’s Iroquois allies in New York). Fully identified with his African and Indian allies, wrapped in the Union Jack, the king was hung, exploded, and burnt. In Savannah, George III was “interred before the Court House.” The press descriptions made sure to mention the ringing of bells and the bonfires – the two most important aspects of traditional King’s Birthday celebrations. These printed descriptions inspired new celebrations and stressed the loud and visible support of the people for the end of monarchy and the beginning of American independence under new forms of government. The celebrations and descriptions they inspired made it seem possible that the thirteen North American colonies, which until that time had had more connections with England than with one another, might unite to form a new nation. 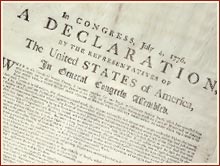 Declaration of Independence.
Broadside. Charleston,
S.C., 1776 (GLC 00959)
During the difficult years of the Revolutionary War, patriots began to celebrate the anniversary of American independence on July 4th and also marked battle victories, and their anniversaries, in similar fashion. These patriots focused on what unified them and on a glorious national future that would follow from their victories, rather than on the British past that they had once actively remembered at such occasions but which they had now left behind. The need of the revolutionary movement to simultaneously practice politics and create national unity only raised the stakes of celebrating national holidays. The trend in the early republic would be for July Fourth, and other celebrations modeled on the Fourth, to spread nationalism and at the same time, to provide venues for divisive political expression. In this way, Americans learned to be American and to practice partisanship without any sense of contradiction. Just as they blamed the British while claiming and using British traditions, they used the Fourth of July to praise and criticize their governments and each other, in the process struggling over who, and what, was truly American.

In 1787 and 1788, proponents of the new federal Constitution staged “spontaneous” celebrations of ratification in the various states, not only to express their relief, but also to attack their opponents and to try to convince doubters that the acceptance of the new national charter by all the states was inevitable. During the 1790s, when disputes over foreign affairs and the role of public opinion between elections led Federalists and Democratic Republicans began to coalesce into informal national political parties, these partisans began to hold separate Fourth of July celebrations in larger towns. They also used the Fourth and its now more fully developed repertoire of parades, sermons, toasts, and newspaper reportage, as a model for new celebrations with explicit political meanings. Federalists began to celebrate Washington’s Birthday in order to support Washington’s policies and confirm their claims to embody the nation. For a time Democratic Republicans marked anniversaries of the French Revolution, which they felt expressed the more democratic version of politics they sought to turn into American tradition. After 1800 they also celebrated March 4th, the anniversary of Thomas Jefferson’s election to the presidency, as an alternative to what they called the “monarchical” tradition of President Washington’s Birthday. Such celebrations helped Americans put into practice a two-party system, which few justified on its own terms but which, along with the newspapers that were increasingly subsidized by parties, provided an orderly meeting ground for an unwieldy federal electoral politics and a tradition of popular rituals.

July Fourth and its alternatives enabled Americans to preserve a paradox: a revolutionary tradition. While these nationalist political celebrations naturally came to have a conservative basis after the Revolutionary Era, there were others, such as abolitionists, who used the celebration to criticize American policy. Shut out of the two-party system by politicians who refused to address the issue of slavery on a national level, abolitionists, too, invented alternative festivals, like celebrations of the end of the slave trade. When Frederick Douglass asked, “What to the Slave to the Fourth of July?” and answered, “The Fourth of July is yours, not mine. You may rejoice, I must mourn,” he did so at an alternative Fifth of July celebration held in Rochester, New York, in 1852. Douglass continued the American penchant for not only celebrating but also inventing new holidays when the political possibilities of the old ones seemed insufficient.

For more information about the celebrations of significant events in early American history, visit the The Gilder Lehrman Institute of American History

Recipient of the Congressional Medal of Honor By Joseph W. Dooley, Treasurer General On Saturday,…

The Liberty Tree: Newsletter of the Massachusetts Society