His fresh look at Revolution finds diversity at its heart 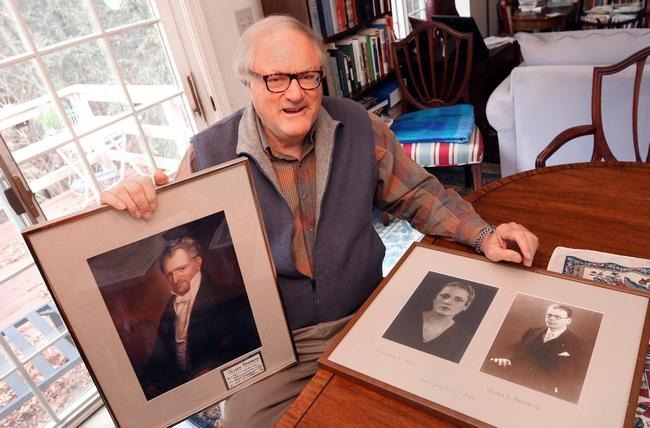 The retired physician, himself a descendant of several Jewish colonists who battled the British, is making it his mission to delve into the role that long-ignored minorities – women, African-Americans, Native Americans, Jews, and even children – played in the nation’s battle for independence.

“It belongs to everyone,” said Andrews, 71, a longtime Newton resident now living in Concord, and the author of a guidebook in its third printing, “Revolutionary Boston, Lexington, and Concord: The Shots Heard ‘Round the World!”

“There is this idea out there that it was only a very small, homogeneous group, and I think the time has come to recognize the diversity of everyone who played a part.”

In the 12 years since he co-founded Concord Guides Walking Tours, which runs two-hour walking tours of local landmarks during the warm weather months, Andrews has become increasingly passionate about aspects of the war often ignored in school textbooks. His list includes the many colonists who demanded freedom but were unrepentant slave owners, that a good segment of the storied Minute Men militia were actually boys barely into their teens, and that a number of native Wampa noag fought – and died – for the colonists’ cause.

His tours, which begin at the Colonial Inn at Monument Square, take tourists just a few dozen yards before Andrews stops at the Old Hill Burying Ground and the 1773 grave of John Jack, an African-born slave who purchased his freedom and became an active member of the community years before the Revolutionary War.

Andrews highlights Jack’s extended epitaph, which became so famous a cry for the abolition of slavery that a full reproduction sits in the Smithsonian Institution in Washington, D.C.

It reads in part, “God wishes man free, man wills us slaves,” and points out the irony that the author, a Tory lawyer named Daniel Bliss, was trying to impart – that the freedom-demanding colonists were themselves oppressors, Andrews said.

“People think, ‘Oh, the American Revolution, what does it have to do with me?’ ” he said. “But so many people have a connection and don’t know it.”

Many colonists whose names are not household words “have a lot to be proud of,” he said.

Most people have heard of Crispus Attucks, a man of African and native ancestry who was among the five colonists killed in the Boston Massacre of March 5, 1773.

But a relative handful know that at least a dozen Concord families owned slaves when the war broke out, and that several local African-Americans battled the British in Lexington and Concord on April 19, 1775.

“My favorite moment is when I have a group of Boston schoolchildren on a tour, and I can tell them all about the abolitionist movement and how African-Americans played an important part in this war, and I see their eyes light up,” said Andrews.

Andrews had always known about his own family’s connection with Haym Salomon, a Jewish patriot-financier and Sons of Liberty member who negotiated loans from France, Holland, and Spain to pay General George Washington’s cash-starved Continental Army, and escaped from the British before a sentence of hanging could be executed.

But few in Boston have ever heard the name. Aside from a US postage stamp dedicated to Salomon in 1975, it seems one of the few places to acknowledge his role is Chicago, where a 1941 monument in Heald Square has the figure of a victorious Washington standing hand-in-hand with Salomon and fellow financier Robert Morris.

Since delving into the role of Jews in Colonial times, Andrews has discovered in his extended family tree two other Revolutionary War soldiers – Colonel Issac Franks, one of Washington’s officers, and Major Benjamin Nones, who fought against the British in the Southern states and was captured in the siege of Charleston, S.C.

But because only one Jewish patriot fought at the Battle of Bunker Hill, and none were present during the action in Lexington and at the North Bridge, the role of Jews is not explored in any detail at nearby Minute Man National Historical Park, which was visited by more than 1 million people last year, said Lou Sideris, the park’s chief of planning and communications.

“We’d certainly be interested in Jewish patriots, if they were there,” Sideris said. “We mostly hear about Congregationalists.”

Sideris said there has been a move among Revolutionary War historians in the past decade to celebrate the diversity of the colonists who fought for freedom. In 2002, the Minute Man park partnered with the Bunker Hill Monument staff in Charlestown to put on a special program about the more than 100 patriots of Native American and African-American heritage who fought at the famous battle, said Sideris.

A more long-term look at their roles, the Black Patriots Project, is being overseen by Harvard professor Henry Louis Gates Jr., and cosponsored by the university’s W.E.B. DuBois Institute and the Sons of the American Revolution, a Kentucky-based organization open to men with an ancestor who served the cause. The contributions of black patriots is scheduled to be the featured theme of the annual SAR national conference next year.

Andrews said he hopes interest in the roles of Jews in the American Revolution can enjoy a similar renaissance in the research community. In the meantime, it had the unexpected result of rejuvenating interest by some of his younger relatives in the Daughters of the American Revolution, among the most venerable of lineage associations, and the SAR, he said.

“For years, Jewish people had the idea that they wouldn’t be welcome, but things fell much more wide open now,” said Andrews, a member of the SAR’s Old Middlesex chapter in Concord, and one of just two Jewish members of the organization in Massachusetts.

He recently delivered a lecture, “George Washington’s Jewish Soldiers,” at his synagogue in Concord, Kerem Shalom, and is at work on another book, tentatively titled “Moses and Miriam in America,” about Colonial life for the first Jewish immigrants.

Joseph W. Dooley, geneologist-general for the Sons of the American Revolution at its headquarters in Louisville, applauded the work being done by Andrews. The organization has made great strides in becoming more diverse in recent years, he said, and hopes to see the trend continue. A few years ago, the national body rejected a proposed lapel pin for its chaplains that contained a cross, because it was considered not inclusive enough for all faiths, he said.

“We are not a Christian organization, we are a patriotic organization,” Dooley said. “We are a lineage society, but within those parameters absolutely everyone and anyone is very welcome.”

The American Revolution may be 235 years old, but it is important to keep unearthing and exploring modern-day connections to the country’s first patriots, Dooley said.

“The past is prologue to the present. If you want to understand where we are, you have to consider where we’ve been.”