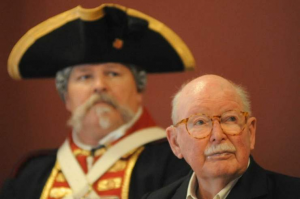 There were no reliable maps, no radio navigation beacons and almost no information about the weather in the Eastern Himalayas when Karl Briel, then an Army Air Corps pilot, was ordered to fly missions through the mountains from India to China and back during World War II. After the Japanese closed the only other route, the Burma Road, in 1942 the peak-dodging flights were the only way the Allies could supply Chiang Kai-shek and the nationalist Chinese in their fight against their Japanese invaders. The missions also later supplied American bomber crews attacking the Japanese from an advance base inside China.

Mr. Briel and other pilots of the Tenth Air Force broke dangerous new ground as the first fliers to make the aerial expeditions.

“The Himalaya Mountains were not properly mapped yet, so we couldn’t really know how high the other ones were in this long string of mountains,” Mr. Briel, 92, of Charlton, and formerly of Millbury and Worcester, said. “We used Mount Everest as the guide, but it was almost always in the clouds so you couldn’t see anything, and it was a little hair-raising to fly over and not know for sure that you were above the tops of all the peaks.”

Briel recounted his days “flying the Hump,” as the Himalayan missions were called, before receiving a national award from the Sons of the American Revolution recognizing his 70 years as a member. (He is descended from Caleb Allen, cousin of Revolutionary War hero Ethan Allen). The SAR, in a ceremony yesterday at the Overlook Masonic Health Center in Charlton, also honored him for his wartime service, which earned Briel the Distinguished Flying Cross, an Air Medal with three Oak Leaf Clusters, and a Presidential Citation with two Oak Leaf Clusters.

They were honors well earned.

“We had one really exciting time when we were completely in the clouds,” Mr. Briel said. “They were so thick we couldn’t even see the wing tips, and all of a sudden my left gunner let out a yell over the intercom and said ‘I just saw some rocks go by our left wing.’ So we opened the throttles wide and climbed as fast as we could to get out of there. That was a really close one.”

Mr. Briel laughs as he tells that story. There is no sense of the choking fear most of us would have experienced during a similar brush with death. With an equally unruffled air, he spoke of the dangers the pilots faced as they crossed the massive mountains and on bombing missions from the Chinese base that their earlier trips had supplied.

“To get enough fuel to China to fly a mission and enough bombs, we had to make three or four trips over, off-load fuel and bombs and come back and do that again until we had enough stocked up,” Mr. Briel said.

The China base gave the B-29s proximity to the Japanese homeland, although they were difficult to supply. “We were the first ones to bomb Japan” using the new heavy bombers, Mr. Briel said.

Some of those missions were very difficult with heavy losses.

“Sometimes we’d lose a quarter of our flight being shot down,” Mr. Briel said. “So we had a few missions that were really bad like that, and that’s what we got the citations for.”

How did he feel after a mission like that?

“People tried very hard to keep it to themselves,” he said. “It was tough. I lost a lot of friends that I knew quite well. But if they didn’t come back, they didn’t. There was nothing you could do about it. So you just tended to say ‘too bad’ and not talk about it. Everybody did that.”

Eventually Mr. Briel, who later ran the Whitney Agency, which is an insurance agency in Millbury, and served as chairman of the board for Millbury Savings Bank for many years, was transferred back to the United States. After the war, one of his assignments was to test B-29s out of a base in Fairbanks, Alaska. The bombers’ engines had recently been modified. They were now twice as powerful and the largest air-cooled radial engines ever built at the time. There were questions, however, about how well they would perform under Arctic conditions and whether they would even start in the deep cold.

After a few weeks in Alaska, the squadron was paid a surprise visit by Gen. Charles Lindbergh, who as a reserve officer advised the armed services on various projects, as well as serving in a public relations capacity. “We didn’t know he was coming,” Mr. Briel said. “He just turned up out of the blue and said ‘I’m going to be here for about a week,’ and he said ‘I’d like to be flying with you whenever you fly.’ I was flabbergasted to have Lindbergh flying with me because I knew he had the reputation for being highly critical.”

So Lindbergh, who Mr. Briel described as a closemouthed person that seldom engaged in banter of any kind, would sit up in the flight deck between Mr. Briel and his co-pilot, watching everything they did and asking a lot of questions.

“One day, after a few days had gone by and we’d gotten used to him, I said ‘General, I remember that you’ve been to the North Pole, but it’s been a long time,’ ” Mr. Briel said. “And he said ‘Oh, yes. A very long time.’ And I said ‘Would you like to go to the North Pole?’ He looked at me. He didn’t say anything for a minute. Then he said ‘Yes, of course.’ So I told the navigator to plot a course for the North Pole and off we went.”

What did the taciturn Lindbergh say when the unexpected joy ride was over? “Not much,” Mr. Briel said. “He wasn’t that type. He just said ‘Oh, that was interesting. That was nice’ and that was it.”