Interview with Compatriot and Senator Roger F Wicker of Mississippi

Compatriots of the National Society of the Sons of the American Revolution (NSSAR) met with US Senator Roger Wicker on 4 February 2009 as a part of the program of the Congressional Relations Committee. Senator Wicker is the 8th SAR member of Congress to be personally interviewed. The committee members present were Timothy R. Bennett, Dennis Hickey IV, and Andrew Johnson, all of the DCSSAR and VASSAR.

Senator Wicker was born in Pontotoc, MS., July 5, 1951. He graduated from University of Mississippi in 1973; and also has a J.D.from that University. He graduated from the ROTC program and entered the United States Air Force, 1976-1980. He continued in the United States Air Force Reserve, 1980-2004 and retired as a Lieutenant Colonel. Senator Wicker became a member of the staff of United States Representative Trent Lott, and then a member of the Mississippi state senate from 1988-1994. He was elected to the One Hundred Fourth through One Hundred Tenth Congresses. (January 3, 1995-December 31, 2007) The senator resigned to accept appointment to the Senate on December 31, 2007 following the resignation of Trent Lott. He was elected to the One Hundred Eleventh through the One Hundred Twelfth Congresses to serve in the United States Senate. 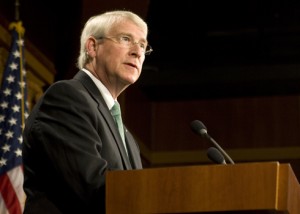 How did you get interested in politics? “I like to say that I got interested in Public Service. Public service was always a part of my family activities. My father was an elected county attorney; he served 8 years in the office of the mayor as city attorney and served as a circuit judge for some 20 years. I watched public service as my father’s son and that is how I got started.

As a strong supporter of health care research in the areas of heart disease and cancer, how will you use your influence to improve these efforts? I was fortunate as a freshman member of the House to be selected to the subcommittee that deals with appropriations for health research funding. Starting in 1995, I became involved in health research efforts. My home state of Mississippi can be considered as “the belt buckle of the stroke belt.” Many of our heart disease and stroke victims in my home state are in the minority communities and we were able to increase funding for this kind of research. We are still working on childhood obesity which initially looked like something dealing with a child’s appearance and maybe something government should not be involved in. When we got more into this problem, the costs to the taxpayer and to the society of this problem became more immediately apparent. Obesity and its lifestyle leads our young people into diabetes, not just the childhood onset type I diabetes but also the type II that we used to see only in later life. Good habits come back to families and education. There so many requirements on schools that physical education programs and recesses have been cut. I met recently with the School Nurses Association and one of their top priorities is combating childhood obesity. It has become an issue that most people now acknowledge and there is agreement that government should be involved in the solution.

With the change in administrations last month, do you envision much greater activity and economic development in your state? I do not anticipate any effect. “In my state, we have a governor who concentrates on economic development and job creation and he has a team here in congress that is very much partners with him and his efforts.” Airbus, the European aircraft maker and ATK of Utah have announced that they are opening 800 jobs in northern Mississippi building aircraft components. “I think that Mississippi has a very good chance of weathering this economic downturn. ” We have a number of military installations which are largely recession proof. Military manufacturing continues from one end of the state to the other; anything from the most advanced naval vessels to components for rockets and space and missile work. We are bringing European companies into the state to build products.

As a member of several committees, Armed Services, Commerce, Science, Transportation and Veterans, how will your experience help? “I hope that 14 years of experience in the House and Senate will give me some advantage in understanding the issues.” I am a veteran myself and there are too few of us in the House and Senate. I was a JAG in the USAF in the 1970’s. It was invaluable experience. I have also served on the Military Committee’s Veterans Affair subcommittee as ranking member. I am proud of what we are doing for our returning wounded warriors and pleased to be able to say that we have increased expenditures for the Department of Veterans Affairs.

How did you get into the SAR and are members of your family in the SAR, the DAR or the CAR? My father is a member of SAR and uncles and relatives are members. My late mother was a state officer of DAR and an accomplished genealogist in her own right. She was very helpful to me and a number of our fellow citizens in documenting their eligibility for membership. I also remember the late Buchanan “Buck” Meek of Euphoria, MS who urged me to join the SAR. “I agreed to but as I left town on Highway 9, Buck was behind me flashing headlights asking me to pull over. When I did, he handed me that application. He was an unbelievable man.”

What can we do as SAR members to educate, promote and “grow” our organization? “Create a sense among the younger generation that it is important.” There are many grey haired leaders but we must find and train the leaders of the future. It seems to me that we need to find a way to reach out to 30 and 40 year old members. They will be the bench that we need to be ready to move into leadership positions.

The SAR supports many youth programs, such as Boy Scouts, Oration and Essay Contests and the JR ROTC. These programs seek to guide young Americans toward public service. As a public servant, what advice would you give young people regarding opportunities and training to serve their country? “I heard General Colin Powell say one time that volunteerism is quintessentially American.” We must be sure that our younger generation understand that and that they understand what Alexis de Tocqueville saw; he marveled that so many things done in America are done by volunteer associations whereas in Europe, citizens look to the government for those activities. “Thank you for being an advocate of ROTC. I am a product of senior ROTC from University of Mississippi.” My son is an Air Force ROTC cadet. “I met only yesterday with a member of the school board from Jackson County and he urged me to find funding for two additional JROTC units for that county.” JROTC has been so successful. He related his own experiences where this program has taken young people off destructive paths and turned their lives around. “Anything we can do to encourage ROTC is very helpful.” I think that it is from the Book of Proverbs that says “Train up a child in the way that he should go and when he is older, he will not depart from it.”

Since Katrina, has Mississippi mostly recovered? And, what steps did it take to better prepare for any future disasters? “Katrina is not over. It may be a non-story for the news media but there are federal responsibilities yet unmet. We have a HUD grant that even five years later has not been spent.” The insurance issue has not yet been addressed by the Congress. We need to amend the federal flood insurance program to include wind and water damage. They are always present with a flood in the Gulf. Almost 50% of Americans live along a coast and we must find a way for them to buy an affordable insurance policy that allows a property owner to collect without proving that the damage was from floodwater rather than wind and rainwater since it is really all one event. The current economic crisis has probably slowed this process down but it needs to be done.

Senator Wicker commented regarding membership and mentioned that we should continue to do all our activities and programs. We must remember the history of the American Revolution and the sacrifices that our ancestors made.

Note: Mr. Johnson recorded this interview and Mr. Bennett made some additions and adjustments to this article. .

The SAR Reaches The Summit