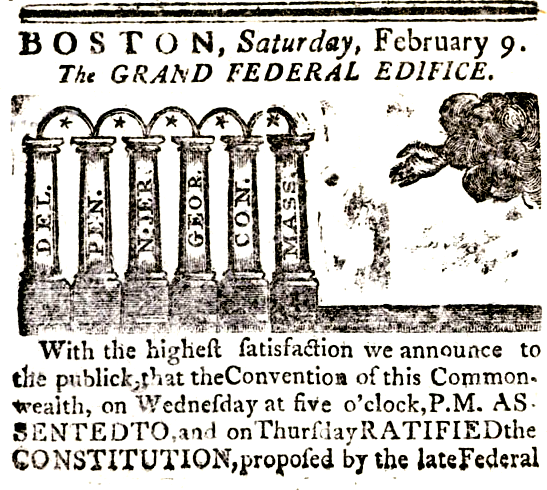 The Massachusetts Ratifying Convention met in Boston from January 9, 1788 to February 5, 1788 to discuss "the adoption of the federal Constitution." 370 delegates had been elected on October 25, 1787, and when the final vote was taken on February 3, 355 registered their vote.

In attendance from the Philadelphia Convention were Caleb Strong, Rufus King, and Nathaniel Gorham. They were joined by Fisher Ames, James Bowdoin, Francis Dana, and Theophilus Parsons in defending and explaining the Constitution. The fourth Philadelphia Convention delegate, Elbridge Gerry—who declined to sign the Constitution on September 17, 1787—was not in attendance. Within the first week of the Convention, however, "a motion was made and passed, that the Hon. Elbridge Gerry be requested to take a seat in the Convention, to answer any questions of fact, from time to time, that the Convention may ask, respecting the passing of the Constitution." Gerry agreed to the invitation the very next day. But Gerry never makes it to the floor of the convention and after January 19, he disappears from view. Absent Gerry, people with less prestige and experience led the opposition.

Unlike the Virginia Convention, the Preamble did not attract the initial attention of the delegates. Instead, after settling housekeeping matters during the latter part of the first week, they launched right into a discussion of Article I, Section 2 which deals with the electoral provisions of the House of Representatives. "Where annual elections end, tyranny begins," was deemed by traditional Republicans to be "one of the first securities of popular liberty." And so the first two days of serious debate focused on whether or not the two-year term provision in Section 2 was consistent with "popular liberty." The delegates focused most of their attention on this section and Article I,Section 4 over the second week, the first full week of deliberations. On Monday,January 21, the start of the third week, they turned their attention to Article 1, Section 8, namely, the powers of Congress clause and concluded on Saturday,January 26 with a discussion of Section 9. So this much is known: the powers of Congress article received six days of coverage. During the first four days of the fourth week—Monday, January 28 to Thursday,January 31 —the delegates covered the remainder of the Constitution although there is no record of any discussion of Article IV!

Near the end of the morning session on Thursday, January 31, The Recorder declares "the conversation on the Constitution, being ended, Mr. Parsons moved, that this Convention do assent to, and ratify, this Constitution."

Some of the most interesting discussion at the convention takes place over the last week. There was an attempt by previously quiet Samuel Adams and John Hancock (he didn’t attend until January 30 because of gout and had not announced his stance on the Constitution to accommodate the opposition by suggesting that amendment proposals be annexed to the ratification. But in the name of what authority can a ratification convention propose amendments? And what is the difference between proposing recommendation amendments and conditional amendments? Proponents of the Constitution urged the former and hoped that the Massachusetts Compromise—ratify now, amend later?proposed by Hancock and supported by Adams and Ames would become the model for the remainder of the ratification campaign across the country.

There is some disagreement about what the likely vote in favor and against was going into the convention, but it was at least even and may have been tilted toward the Antifederalists. Some Massachusetts Antifederalists even suggested that they had a majority of “forty or more.” (For a through examination of the competing accounts, see Appendix B in Orin Grant Libby’s The Geographical Distribution of the Vote.)

Who Changed Their Mind?

It would be remiss not to note that after the vote was taken, no fewer than eight of the delegates who voted to reject the Constitution —including vociferous opponents Samuel Nason, Benjamin Randall, John Taylor, and William Widgery of the independent Maine movement—promised to work with their constituents to support the Constitution. And Gerry? "Crest-fallen but acquiesces."

Thanks to Joseph Groff for assisting the author with the initial draft of the day-by-day summary of the Massachusetts ratifying convention. This article was taken from Teaching American History

Open Rebellion: Town Meeting Defying the Tyranny of the Intolerable Acts in Grafton

Remarkably, the document not only shows a key step in separation between the Crown and the colony, but also shows the chain of action; county and town. The Worcester resolve is followed by a record of the Grafton town meeting held to consider those measures. It's a fascinating look at the grassroots nature of independence, uniting citizens of the smaller towns to take over their own governmental functions. This pivotal step helps explain why the towns were ready to send militia the day they received word of the Lexington alarm.

On September 5, 1774, Captain Luke Drury moderated a Grafton town meeting held to consider the resolves. By a unanimous vote, the townspeople agreed.