The Arizona and new Mexico societies invite you to Phoenix for the 122nd annual National Congress, July 7-11, 2012. If you have never been to Arizona or new Mexico, we encourage you to come early (or stay after) and learn about Spain’s contribution to the American revolution.

Spain declared war on England June 21, 1779, and continued operations against England until peace was declared Sept. 3, 1783. King Carlos III urged his soldiers and sailors to attack the English wherever they appeared. If you are driving to the congress there are many places to see in new Mexico and Arizona. See the Congress web page (at http://www.sar2012congress.com) for points of interest you may visit.

Events prior to the Congress will start at 8 a.m. on July 6, so plan your flights or drive to arrive on July 5. Please visit the web site directly or access it via the Arizona Society, New Mexico Society or Rocky Mountain District web sites for more details.

If you are flying to Phoenix, the airport code is PHX. The Arizona Baltimore Resort & Spa, a member of the Waldorf Astoria Collection (HiltonHonors), located at 2400 east Missouri Road, will be your destination. Your accommodation reservations can be made via the Baltimore web site link on the 2012 congress web site or by calling 1-800-950-0086. A group code for NASSAR has been established for our Congress. There is no concierge or club level. Wireless Internet service is free in sleeping rooms.

There is no hotel shuttle service, but discount fares have been negotiated with super shuttle van service and with Executer. See the congress web site for links and more details. 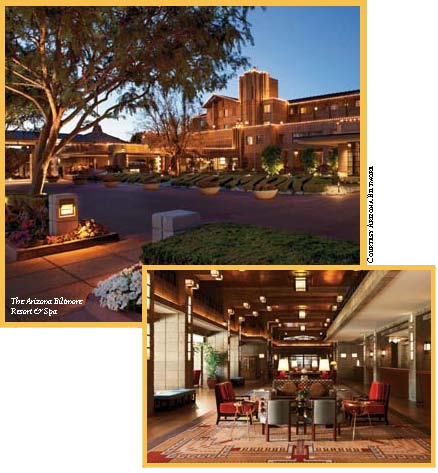 The Arizona and new Mexico compatriots welcome you to come and experience our famous “it’s a dry heat” lifestyle. Congress 2012 will be a “casual congress”. Leave your suits at home. Bermuda-style shorts or lightweight slacks and collared short sleeve shirts are the accepted attire except for the Tuesday and Wednesday night banquets. Minutemen will need white coats on Recognition Night.

On Friday, July 6, we will open early registration for those people attending the Info Sessions on the Tucson Presidio and the Santa Fe Presidio.

In 1775, Hugo O’Conor established the Tucson Presidio. This year marks the official birth date of the City of Tucson. Tucson became the capital when it fought for independence in 1821. After the Gadsden Purchase in 1854. Tucson came under the jurisdiction of the United States. Arizona an official territory in 1863. Between 1867 and 1877, Tucson held the title of a territorial capitol of the Province..

Originally named La Villa Real de la Santa Fe de San Francisco, the Presidio was built to protect the Mission de San Miguel (built from 1610-1625). The chapel of the mission was fortified in 1710. The fortified complex was abandoned by the Spanish and occupied by the Pueblo during the Pueblo Revolt in 1680. Recaptured by Spain in 1692, the Presidio was then rebuilt and named Presidio de Exaltación de la Cruz del Nuevo Mexico (aka Presidio of New Mexico), and also known as El Real Presidio de Nuestra Señora de Los Remedios y la Exaltación de la Santa Cruz. The Palace of the Governors is located at the heart of the old Presidio complex. Fortified barracks were north of the palace. The Plaza de Armas outside the palace later became part of Fort Marcy. The San Miguel Mission still stands.

More on the Congress …

The Arizona Ladies Auxiliary needs your help prior to the 2012 Congress. Its members plan to collect as many telephone calling cards and patriotic SAR or blank “thank you” cards as they can and send them to our troops at the Landstuhl Regional Medical Center in Germany. In the Ladies Hospitality Room they will address thank you cards with a calling card inserted. As an individual, chapter or society gather the calling cards (preferably $10 denomination) and thank you cards and mail them to J. Michael Jones at 212 West Country Gables Drive, Phoenix, AZ 85023-5250.

If you prefer to make a donation, send a check payable to AZSSAR and we will buy the calling cards in your honor. All donations will be recognized at the Congress.

Santa Fe was the capitol of the Spanish province of New Mexico beginning in 1610. Since it continues to be the state capital, this make the city the oldest continuous seat of civil government in the United States (ahead of Boston in 1630).

We’ll close the day with an ice cream social for a nominal fee. If the 6:40p.m. Diamondbacks game again the Los Angeles Dodgers becomes available, we’ll shuttle activities. We have requested that the NSSAR National Color guard present colors.

On Saturday, we’ll tour the Heard Museum (http://www.heard.org), and . return to the Baltimore Resort for our Host reception of Mexican appetizers and a Margarita Fountain. Dinner will be on your own.

On Sunday, there will be committee meetings, and the President General will review the color guard prior to the National Memorial Service, held within the Baltimore Resort.After dinner on your own, please attend the Rumbaugh Orations.

On Monday morning, plan to get up early so you can attend the cannon and rifle salute performed by the Presidio San Agustín del Tucson Garrison. The garrison portrays the military aspect of the Presidio del Tucson. The soldados are uniformed as the Spanish forces assigned to the area of present-day Arizona. Dressed as the Catalonian Volunteers, Dragoons of Spain, or Presidio Soldados, the group interprets life at the presidio (www.tucsonpresidiotrust.org/soldados.htm). There will be information in your packet.

Registration will open at 8 a.m. and the Opening General Session of Congress will begin at 9 a.m. The Youth Awards Luncheon table decorations will be provided by the Arizona Society Children of the American Revolution. Dinner will be on your own, but return in time to attend the Awards Recognition at 8 p.m.

On Tuesday, we will continue with the 2nd General Session of the Congress and with committee reports. Our ladies will attend their luncheon. For the evening banquet there will be Spanish table decorations provided by the New Mexico Society to honor the Palace of the Governors, the oldest continuously used governmental building in the United States.

On Wednesday, July 11, we will continue with the Final Session of Congress. Our ladies will go on a shopping tour to Scottsdale Fashion Park (10:30 a.m.- 2:30 p.m.). For the evening banquet, the patriotic table decorations will be provided by the Arizona Society.

As Porky Pig would say, “That’s All Folks!”

Serving as your President General is a great honor. When I joined the SAR, I had no idea that someday I would be serving you in this position. Billie and I want to express our gratitude for your support over the years. My primary goal is to continue advancing the objectives of this organization. The 124th Congress is behind us, and it was