Written by Merrill, a Colonel of militia, sending an account of the American militia’s opposition to British troops at Lexington and Concord to Captain Currier. Mentions that Gage marched last evening out of Boston “Destroying our men and interest.” Tells Currier to muster and mobilize as many of his officers and soldiers as possible. Tells him to spread the word and have other militia companies join them. Says he should appoint an officer to take charge in case he has to leave. Merrill still saw himself as a British citizen when he signed the date of the letter “in the Fifteenth Year of the Reign of George the Third.”

[Essex County] ] To John Currier Capt. of a militery [sic] foot Company in Amesbury this Day I have received intiligence [sic] that the ministeriel [sic] troops under the Command of General Gage did Last evening march out of Boston and marched to Lexington & there Killed a Number of our American Soldiers & thence proceed to Concord Killing and Destroying our men and interest. These are therefore to Order you forthwith to Mobilize and muster as many of your under officers and Soldiers as you can possible to meet immedially [sic] to Some Suitable place: and then to march of [f]forthwith to Concord or Else where as in your Discretion you shall think best to the relief of our Friend[s] and Country: and also to order those who are now absent & out of the way to Follow after and join you as Soon as they shall be apprized of the Alaram [sic]and when you have marched your men to Some post of our army you are to appoint some Officer to head them in case you return home your Self Till some further Order may betaken: in this Faile Not[.] Given under my Hand and Seal at Amesbury this Nineteenth Day of April in the Fifteenth Year of the Reign of George the Third Anno Domini: 1775. Isaac Merrill Coll. 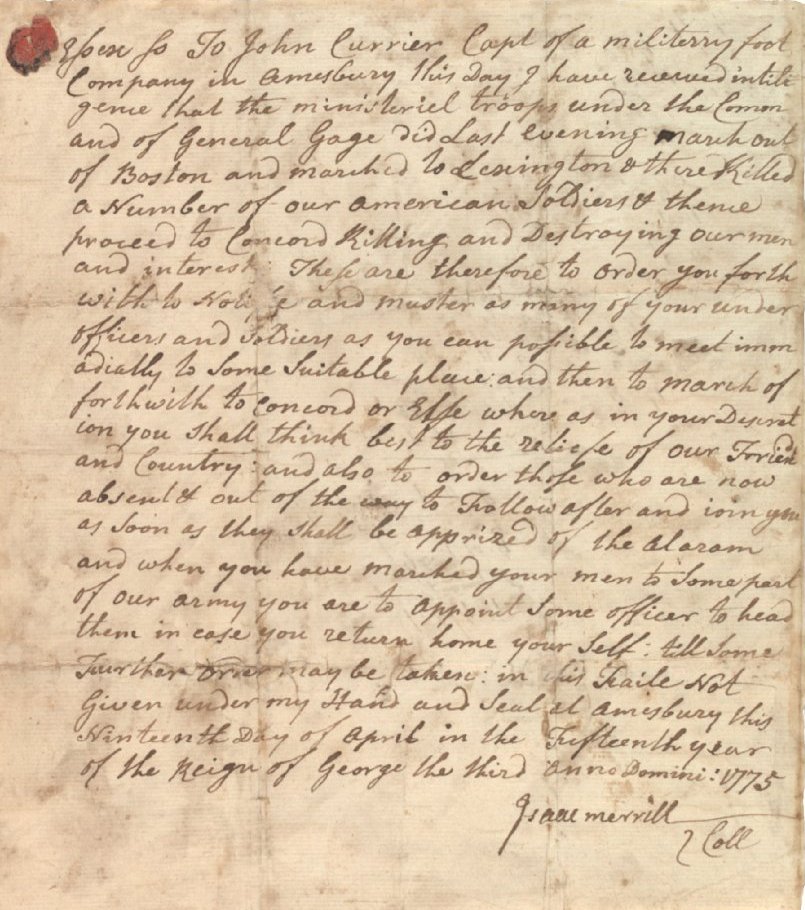 In February 1775, Parliament declared Massachusetts to be in a state of rebellion. This declaration permitted soldiers to shoot suspected rebels on sight. In April, General Thomas Gage (1721-1787) received secret orders to arrest the ringleaders of colonial unrest. Having already learned of the orders, colonial leaders fled Boston to avoid arrest. Gage decided to seize and destroy arms the patriots had stored at Concord, 20 miles northwest of Boston. On the night of April 18, 1775, 700 British soldiers began to march toward Concord. When Joseph Warren (1741-1775), a Boston patriot, discovered that British troops were on the march, he sent Paul Revere (1735-1818) and William Dawes (1745-1799) to ride to Concord to warn the people about the approaching forces. At dawn on April 19, the troops reached the town of Lexington, five miles east of Concord. About seventy volunteer soldiers called minutemen lined the Lexington Green to warn the red-coated British troops not to trespass not he property of freeborn English subjects. A shot rang out; the British troops fired. Eight minutemen were killed and another ten were wounded. The British continued to Concord, where they searched for hidden arms. At North Bridge, a group of redcoats and minutemen clashed, leaving 3 redcoats and 2 minutemen dead. The British then retreated to Boston, while citizen-soldiers fired at the soldiers from behind trees and stone fences. British solders killed or wounded totaled 273; colonists losses were 95. The resistance displayed on April 19, 1775 indicated that the American Revolution would truly be a popular revolution. The battles of Lexington and Concord occurred three weeks after Patrick Henry (1736-1799) delivered his famous words, “Give me liberty or give me death.” Although an earlier battle with the British had been fought in North Carolina, at Moore’s Creek Bridge, Lexington and Concord became fixed in the public mind as the valiant start of American resistance. Several first-person accounts of these battles survive. Phineas Fullam, a Committee of Safety post rider, reported seeing “some of the Men killed the whole number on both sides as near as can be estimated is 200 among whom are a Considerable Number of Regular Officers.” Colonel Isaac Merrill, who mobilized the Amesbury militia, offers the description of one of the Revolution’s opening clashes.

Moses Doan and Robert Gibson and the Immortality of a Reputation

Picture: THE DEATH OF MAJOR KENNEDY AND MOSES DOAN. From the Piratical and Tragical Almanac…