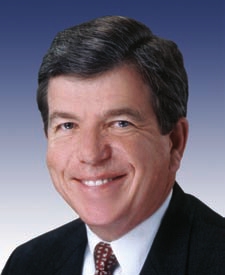 The ninth in a series of interviews with Congressional SAR members focused on Sen. Roy Blunt, R-Mo. Past Chairman of the Congressional andGovernmental Relations Committee Timothy R. Bennett and committee membersJ. Phillip London and recorder Andrew M. Johnson, both of the DCS SAR,interviewed Blunt in his office on Capitol Hill, while he was still a member of the U.S. House of Representatives. He was elected to Congress in 1997, and elected to the U.S. Senate in 2010.

Mr. Blunt, why did you get interested in politics?

I have always been attracted to the idea of public service. Even for the four years of my adult life not spent in elected office, I was a president of a university, which has the same kind of satisfaction as part of that job every day. Just a few weeks ago, I decided that I would run for the Senate, which is at least a six-year commitment on my part. I went through the thought process of committing another six years to public service, and the truth is that I have always been highly rewarded and felt like I was doing something that mattered to the future of the country.

How was your experience as a university president and administrator helpful as majority whip in the U.S. House of Representatives?

For the four years before I came to the House, I was a university president at SouthwestBaptist University in Bolivar, Missouri. I have told a lot of people over the years that of all the great jobs I have had, that was actually the best one to prepare me to be the whip of the House.

On a college campus, a president can make a lot of decisions, but to rally that community around those decisions, you have got to have a skill level that will allow you not to talk about what is perfect but about what is doable. In those four years, I don’t believe that a single person ever asked me to do anything wrong, but I still had to say no a lot of the time.

The members of the House are surprisingly detailed in their understanding of the issues that they deal with. The American people, I think, would be pleased and surprised if they could see how much information the members of the House have on the many issues facing them. The whip (Blunt’s position at the time of this interview) needs that broad knowledge of issues and must move a broad agenda forward when everybody has some appropriate sense that their part of that agenda is the most important.

Four years on a Christian college campus is a good experience whether you are the president of the college or a student there, and I benefited from that as a student a number of years earlier and as the president later.

Do you think the administration is proceeding in the best way to help the country recover from this economic downturn and also become more energy efficient?

I would strongly suggest that the times we are in now are not the times to make us less competitive or create a tax on energy. Cap-and-trade legislation would make us less competitive. I do think that we can move in the direction of using more American energy resources and less from foreign sources. In my view, that is what the Energy and Commerce Committee should be focusing on now. The whole concept of bailouts is troublesome to people whether they came from our early votes to give more money to agencies such as FNMA (Federal National MortgageAssociation) or FHLMC (Federal Home Loan Mortgage Corporation) or the money that went to automobile companies. It certainly doesn’t seem to be producing the kind of results that taxpayers would want to see or that members of Congress would have hoped for. I was opposed to most of that legislation, although the September 2008 bill appeared at the time to be necessary to stabilize the economy. It did not do the job that the administration was telling us that it would do.

These are a couple of pieces of legislation that I sponsored that became law. The CMA was designed to take the ingredients of methamphetamines off the shelf and put them under control.I was recently in a meeting with officials in Mexico where they tell me that Mexican meth immediately replaced our homemade meth. Missouri, like many other states, had a big problem with meth and this act helped a lot all over the country. The Mexican government, to their credit, also put the ingredients for meth under control.Now, I am told, meth costs twice as much as it did five or six years ago, a product of limiting the supply.That was a step in the right direction. TheCharitable Giving Act was an act to encourage people to give more money to church and charity through tax code encouragement. It produced good results, and I think we should be encouraging people to give more while the current administration’ stalking about limiting tax deductibility for charitable deductions. I am opposed to that. Charities do a better job with every dollar than the government does. Charity fundraising is very competitive and while not every dollar of giving is driven by the tax code, a significant number of donors are persuaded to donate on the basis of the tax code.

As a member of the SAR, what can we do to promote, educate and “grow” our organization so that we may be more effective?

I am pleased to be in the organization, and I have a number of ancestors who, I think, would have qualified me for membership. We used one of my relatives who was an Indian Scout, an Indian spy named Philip Highnote, and we were able to establish that genealogy. I am looking forward to seeing what the organization is doing. Certainly an important part of our heritage is the heritage of independence and the willingness of individuals to fight for that independence. As a former history teacher, it seems to me that our teaching of history has shifted away from the foundational document sand formative moments to those things we now wish to suggest were bigger than they were. Self government was a new idea. The idea of check sand balances, which we take totally for granted now, was a unique and new American idea.

The SAR supports many youth pro grams, which seek to help make youngAmericans more public service oriented.As a public servant, do you have any suggestions for these young people regarding opportunities and training for their adult lives?

In our country, public service needs to be an integral part of every citizen’s life. You don’t have to run for office and you don’t have to be a part of the government to be involved in public service.Participate as a voter, be active in your community, accept the responsibility of citizenship; all of these are key to public service. Democracy works best when everybody understands that they have an obligation to be part of democracy. Regarding public office, my advice would be to prepare yourself for the thing that you would rather do if public office did not work out. There is plenty of room in politics for doctors and engineers and farmers. You are much better at politics if you don’t feel that you have to have that elected job. The worst thing to do in politics is become dependent on the political office that you hold.

Are members of your family in the SAR, DAR or CAR?

My sons (except the one born in Russia, who is my adopted son) and my grandsons are all in the SAR and hopefully my daughter and my granddaughters will become members of the DAR..