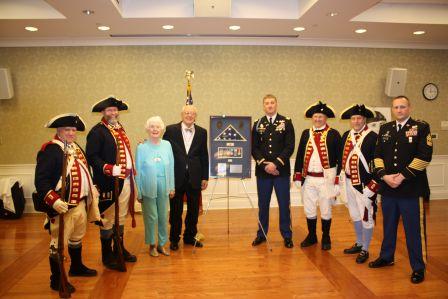 The caller spoke of Bachman’s younger brother, an Air Force pilot who died in combat in North Korea in 1951. This time, the Lexington woman’s tears for him would be bittersweet.

The man on the phone was a military officer who wanted to return a Purple Heart medal that belonged to her brother, 1st Lt. Thomas E. Hadley II.

Six decades after his death, Bachman would be getting back a symbol of her brother’s service that she didn’t even know was missing.

A Pennsylvania family had had the medal since at least 1967, Vermont Army National Guard Capt. Zachariah Fike told Bachman. No one knows how the medal migrated from the pilot’s home state of Michigan to the Philadelphia suburbs.

“It’s a neat story,” said Larry Moore, whose family had the medal. “I wish I had more pieces of the puzzle.”

The 48-year-old police sergeant said he found the medal among belongings he inherited when his father died last year. His father was a Marine Corps veteran who served in Korea.

“When I was a kid, I used to sneak up into his things and play with it,” Moore said.

Moore’s grandfather worked as a city sanitation supervisor in Upper Darby, Pa., and originally found the medal. Moore, who lives and works in Lower Chichester, Pa., doesn’t know whether his grandfather saved the medal from a trash pile or got it another way.

But when Moore found the Purple Heart after his father’s death, he knew he had to find its owner. The combat decoration honors U.S. military members who suffer wounds or die in action.

This medal was missing its ribbon but had the pilot’s name engraved on the back. With only that to go on, Moore sent out several emails last February. He got no answers.

In December, he picked up the cause again by emailing The Military Order of the Purple Heart. The group connected him with Fike, a Purple Heart recipient who has reunited four other families with lost Purple Hearts.

The 30-year-old Army captain researched military and ancestry records online before linking the late pilot to the man’s sister in Lexington. Then he made the call to Bachman.

“This is Captain Fike with the U.S. Army,” he told her. “I’ve got some strange news for you that might catch you off guard.”

She was suspicious at first.

“I thought, ‘What kind of scam is this?'” Bachman said. “So I started asking questions, and he answered them all.”

After Fike won her over, the two talked more about the brother whose sacrifice for his country has been both a source of pain and pride for his family.

Hadley was 22 when he died on a mission to bomb North Korean supply trains.

Fike said a combination of military, newspaper and family accounts show Hadley’s plane crashed after he intervened to save the life of another pilot who was under attack. The family expects to get Hadley’s full service records soon.

The military listed him as missing in action for years because no one could say whether Hadley ejected before his jet crashed. Bachman said the family had to live with the thought that he might be dead or alive in an enemy prison.

But in 1956, the military recovered the pilot’s remains and returned them to his family for burial.

The government awarded the pilot a Purple Heart and the Distinguished Flying Cross for his heroics, a letter the Air Force sent the family shows. The letter also shows the pilot already had won another Purple Heart months before his death for wounds suffered in action.

Bachman and her husband, Charlie, a retired inventor in software engineering, suspect it was the first Purple Heart that ended up in Pennsylvania.

She remembers mailing some of her brother’s medals to Washington state in the 1980s to the woman he married shortly before his deployment. But Bachman said she never met her brother’s widow, whom she said now also is deceased.

Whatever happened, the family celebrated the medal’s return Saturday.

Fike joined dozens of the late pilot’s family members, veterans and other guests at a ceremony inside the Bachmans’ retirement community. The Army officer presented the Purple Heart to the Bachmans in a shadow box including replicas of Hadley’s other medals.

Bachman’s husband said they were “delighted.”

“It was a very nice turnout here,” with at least 100 people in the audience, he said.

Moore, the man whose family had the medal, said he had been “wishing they’d find the actual Thomas E. Hadley” but “I was glad they found his sister, and she can have it.”

Bachman said the medal’s return almost makes up for the time her brother was listed as missing in action.

“It’s a finalization,” she said. “… It’s important that Thomas Hadley gets his recognition.”

Campaign for Historic Photos of the Revolutionary War Generation