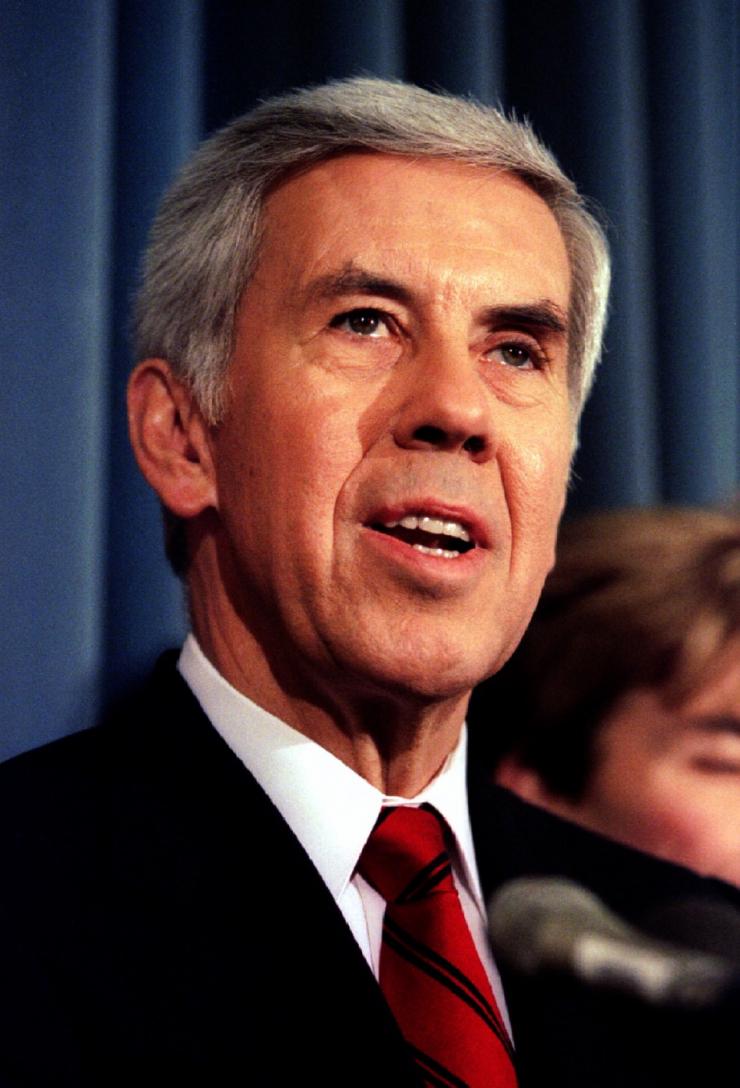 Our interview with Senator Richard Lugar was completed on May 23, 2011. The members of the Congressional and Government Relations Committee who participated were Timothy R. Bennett,
Dennis J. Hickey lv and Andrew M. Johnson, Recorder. Senator Lugar is a fifth-generation Hoosier and is the U.S. Senate’s most senior Republican member. He currently serves as Republican leader of the Foreign Relations Committee and is a member and former chairman of the Agriculture, Nutrition and Forestry Committee. He was elected to the Senate in 1976 and entered his sixth term in 2006 with 87 percent of the votes cast. He is a graduate of Denison College and was a Rhodes Scholar at Oxford University. He served in the U.S. Navy beginning in 1957 on the staff of the Chief of Naval Operations.

I was interested because my parents were involved in Republican politics, never as candidates but as interested citizens. I was at the Monument Circle in Indiana pohs when Wendell Wilkie came to campaign in 1940. I became involved in politics after I returned from naval service and I was working with my brother man aging farm and factory interests. I was asked to run for school board and they added, ‘You ’re far too young but you are all we got.’ Our four sons were headed into the public schools and we thought that this would be an important thing to do. I was elected and in 1967, I became the mayor of Indianapolis. I was elected to the U.S. Senate in 1976 and this is my 35th year in the Senate.

As the Republican leader on the Foreign Relations Committee, do you fed that our country is continuing to make progress with other nations regarding nuclear, chemical’ and biological’ weapons?

Yes, we are. We had successful ratification of the new START treaty last December; which continues a strategic arms relationship with Russia. Month by month, I get Pentagon reports on the numbers of nuclear weapons destroyed under the treaty.

This has led Russia and the United States to be very interested in the nuclear weapons of every other country. Specifically, we are interested in dissuading countries such as Iran and North Korea from further nuclear development. We have also been active in working with other nuclear nations to make certain that we are all working together to contain potential loss of nuclear materials to terrorists.

Sen. Lugar, with regard to the Agriculture Committee, of which you have been the chairman, what do you think will happen to those Missouri farmers whose land was under water after the levee destruction? Will they be fairly compensated?

Federal crop insurance programs are avail able to those farmers. I don’ specifically know about those farmers whose lands were flooded by the deliberate levee destruction by the Corps of Engineers but a large section of the farm bill involves crop insurance, which has very largely replaced other subsidy programs. The loss of crops this year will be especially difficult for those Missouri farmers since they could have anticipated high prices for their crops. This is just my best first estimate and I have asked the staff to look at other provisions since this was a deliberate act by the Corps of Engineers to protect property farther downstream. Farming is an uncertain and precarious process, which is why I have advised all Indiana farmers to avail themselves of the crop insurance program.

Would you explain the Lugar Energy Initiative?

When the Congress debated the so- called “cap and trade” carbon tax proposals, it became clear that no legislation would be passed because of a wide division of interests between states with gas and coal production and those which did not. It became apparent to us that there was value in improving the energy efficiency of existing buildings and transportation sectors.
The question became should those efficiencies come about by mandate of the federal government or through the process of personal choice. We chose the latter and we looked at the Empire State Building because it is a building most people will recognize. The owners borrowed money and renovated that great building to save about 32 percent of their energy use each year. The same can be done in government buildings at state, federal and local levels. Some credits have been offered in recent years to homeowners. In the area of petroleum, our emphasis is on the automobile and how to bring about higher mileage in ways that people will choose. it did not pass but we will offer another version this year.

How did you obtain membership in the SARI Are members of your family in the SAR, DAR or CAR?

That question stymied me! I believe that my mother was a member of DAR and she encouraged me to become a member of the SAR. We took our family heritage very seriously.

Back in about I983, we were at a critical point in American foreign policy. Since I979, NATO thought we had a deal with the Russians that there would be no missile movement closer to our allies. The Russians began forward missile deployment. Many of our allies were unwilling to confront the Russians at this point and President Reagan sent me to Germany during that period to see if we could warm up our allies to the acceptance of Pershing missiles to oppose the Soviet missile deployments. Ambassador Arthur Burns advised me that I really ought to check out my German heritage since I was about to do this public relations effort in southern Germany. I did and found that Adam Lugar, on whom I base my membership in the SAR, came as a Hessian soldier. He and many others had the good sense to desert and become Americans. He fought as a patriot at Guilford Courthouse and was given farmland in Virginia after the war. His son came to Indiana in I82I-23 where the Lugars lived in Grant County. My father moved to Marion County near Indianapolis, where he established farm interests and where my family continues to live.

As the U.S. Senate’s most senior Republican and longest-serving member of Congress in Indiana history, have you considered running for higher office? If not, what are you likely to do upon retirement?

I was a candidate in 1995-96 for the Republican presidential nomination. i was very active in those two years but Bob Dole was ultimately the nominee. I thought he would choose to remain as majority leader of the Senate rather than run for the presidency, but I was wrong. I do not plan to run for other offices. I am a candidate for Senate in 2012 and am hopeful that Twill be successful.

The Sons of the American Revolution supports many youth programs. As a public servant and SAR member, what should we do to encourage young people to make public service a part of their lives?
We attempt in this office to invite students, usually at the college level, to become interns for periods of time. We presently have I6 interns working in this office and in our Senate Foreign Relations Committee office. I meet with them to respond to their questions and to point out things I think they should be looking for. I try to establish a relationship so they feel they might call back to this office or inform us of things we need to know. I try to expand beyond these very personal relationships with a whole series of events in Indiana. In December, I invite two junior students from each of the high schools in Indiana. Then, we have 10 panels of experts with whom the students meet throughout the afternoon. We have another program in the University of Indianapolis in a center named for me at which we invite leaders from each of the colleges in Indiana to come to the university for a day. This allows me to meet the campus leaders and to respond to their questions, perhaps offer advice. Then, I respond to a large number of invitations from Indiana high schools and even elementary schools. I continue to serve on the board of trustees of my alma mater, Denison University, and have for the last 45 years. I am also a member of the advisory board for Pembroke College, Oxford, which I attended as a Rhodes Scholar. In all these ways, I try to influence young persons as they head into graduate school or employment.

Another concern of the SAR, Sen. Lugar, is the limited amount of education taught about American Revolutionary history and its importance in the founding of this great country. Have you any suggestions on how we can improve in this area?

I think that the most basic suggestion is working with local school boards. There are debates all over our country over what is I really important to teach in the schools. It is not just Amen can Revolutionary history that has been bypassed but history altogether. People in the press will from time to time ask questions on some very basic parts of our history and a small percentage of respondents come up with the right answer. This may be forgetfulness over the course of years, but at the same time, there is some appearance that this is not an area in which people have been adequately taught.”

What can we do as SAR members to promote, educate and “grow” our organization?

I think, first of all, to make known the opportunity to identify with those who were American patriots in our Revolution. While this is an exciting quest, SAR must give guidance on how one goes about the ancestral search. The computer opens a lot of possibilities that were not there when we were young. The SAR should indicate some places that Americans can go on the Web to find some of the information and tools that they may need to find their ancestors. Given the curiosity of young people and their facility with computer technology, it offers an especially nice avenue for young people.

We salute you for your contributions and long service to our country. Have you any additional comments or questions?

My first trip outside the U.S. was as a student to Oxford and I discovered how big the world was and how many talented people there are. I also gained an appreciation of the uniqueness of the United States. My understanding was greatly increased by the experience of being outside the U.S. and noting how important our country was.

When I left England, I volunteered for the Navy OCS, I came back to the United States and married and reported for duty in Newport, R. I. it came about that Admiral Burke, then chief of naval operations, was looking for young officers to work in his briefing theater at the Pentagon. I went to Naval intelligence School and then came on board as a briefing officer preparing intelligence briefings and representing the Navy with CIA, NSA and other agencies, it was a mentor relationship that was really incredible. When later I was elected to the Senate, Admiral Holloway invited Admiral Burke to a lunch at which we had a chance to reminisce. Those three years ,four months on active duty were a very important part of my life.

Worcester marks its role in revolution

On Sept. 6, 1774, more than 4,600 militia from Worcester and three dozen surrounding towns descended on the county courthouse, forcing the magistrates appointed by the British administration to resign, and effectively declaring Worcester County to be beyond the reach of Parliament in London.