The Germany Society of the Sons of the American Revolution is leading an SAR delegation to Germany to honor the service of the Germans who assisted in the American Revolution, specifically the regiment from the Duchy of Zweibrücken. That regiment served in the French Army under Rochambeau as the ­at the decisive Battle of Yorktown. The regiment was commanded by two of the Duke of Zweibrüken’s children from his morganatic marriage to Marie Anne Camasse. The King of France later granted her the title of Countess de Forbach (the French city where she was born), allowing her children (who could not inherit the Duchy of Zweibrücken) to become Counts de Forbach. The regiment was under the command of the Duke’s son, Christian de Deux-Ponts, and his brother Wilhelm de Deux-Ponts was the colonel-en-sec­ond. The regiment con­sisted of Germans, and German-speaking sub­jects of the King of France – they were from Zweibrücken, the Holy Roman Empire, Alsace, Lorraine, France, Switzerland, the Low Countries, and a few from Savoy, Ireland and Sweden. The regiment came to America in 1780, arriving in Newport, Rhode Island, and they marched with Rochambeau through Connecticut, New York, New Jersey, Pennsylvania, Delaware and Maryland to engage the British at Yorktown. The Regiment Royal Deux-Ponts heroically stormed Redoubt No. 9 at Yorktown with the French Regiment Gâtinais, capturing two mortars from the British. General George Washington awarded the two captured mortars to the two regiments to honor their daring assault on the redoubt. We hope to locate descendants of the Regiment Royal Deux-Ponts to apply for membership in the Germany Society, as well as current SAR members living in Germany.

The planned itinerary is as follows: participants will arrive at Frankfurt International Airport, where they will be met by travel staff. If you choose to arrive in Europe before the start of the SAR trip, you may arrange to meet us at the Frankfurt airport. Our bus will depart once everyone has arrived on April 24, 2012. When we arrive at Zweibrücken, we will check into our hotel. We are planning a ceremony honoring the Zweibrücken regiment, as well as an evening walking tour of the town fortifications. We will take a short trip to the French town of Forbach, where we plan to have a wine and cheese reception with compatriots from the SAR France Society, and view Forbach castle.

On April 26, 2012, we will travel to Heidelberg, where we will tour the castle and the Old Town. After lunch, we will con­tinue to the town of Rothenburg ob der Tauber, and check into our hotel. In the evening, there is an optional night watchman tour of Rothenburg. On April 27, we will tour and have lunch in Rothenburg’s Old Town. We will contin­ue on the Romantic Road to the 1,100-year-old town of Nördlingen. We will visit the tower of the Saint Georg’s Church, which is made of shocked quartz from a meteorite impact that created the crater within which the town was built. We will then continue to Munich, where we will check in to our final hotel. 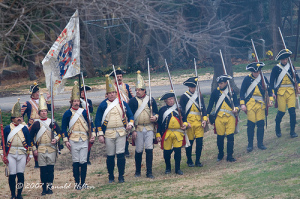 On May 1, we will be transported to the Munich International Airport for our return flight to the United States, or you can extend your trip on your own. This itin­erary requires a minimum of 40 participants.

Special extras that we are trying to arrange include a reception with the Lord Mayor of Zweibrücken, a visit to Baron von Cetto’s castle near Augsburg, and a tour of the Bavarian Parliament, which has a life-size painting of the Surrender at Yorktown. We also hope to arrange an evening reception with Barbara Stamm, the President of the Bavarian Parliament. Please contact Stephen Renouf at Usina@aol.com or (510) 276-8946 if you are interested in attending the Germany Society Trip in April 2012.