For many years, the NSSAR has been blessed with royal members, such as His Royal Highness Juan Carlos, King of Spain and HRH Felipe, the crown prince. Hélie, duc de Noailles, has served as the president of the France Society for many years, and Étienne, marquis de Certaines currently serves as an administrator of the France SAR Society. When the Spain SAR Society was chartered in May 2010, the charter president was Francisco de Borbon, duque of Seville. For many years, Jacques, Comte de Trentinian has served as the vice president for Europe, and historian for the France Society is Comte Thierry de Seguins – Cohorn. I suspect that among the members of the SAR there are others with royal titles. 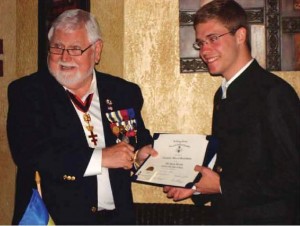 On July 25, Judge Ed Butler, President General (2009 – 2010), inducted Duke Alexander zu Mecklenburg, (prince and heir to the Duchy of Mecklenburg, as a member of the Spain SAR Society. His father, Duke Borwin zu Mecklenburg also was inducted in absentia. Both are descendants of Carlos III, king of Spain at the time of the American Revolution. Spain provided large sums of money as gifts, made loans and provided arms, ammunition and supplies to the rebelling colonists from 1775 – 1783. Many Spanish troops and militia fought the British and their Indian allies in what are now the states of Louisiana, Mississippi, Alabama, Florida, Arkansas, Missouri, Illinois and Michigan. Spanish vaqueros herded Texas longhorn cattle, bulls and horses from Texas to Louisiana to feed the army of Gen. Bernardo de Galvez.

The young duke spent five weeks of his summer vacation as the guest of retired Brig. Gen. Pat Rea, Grand Master of Knights Templar. Rea is a friend of Alexander’s father.

Butler, who also serves as a Deputy Grand Prior of Knights Templar, volunteered to give Duke Alexander and his traveling companion, concert pianist Michael Pecak, a Texas experience. They arrived in San Antonio on July 23, in the midst of a drought and an oppressive heat wave. For the next two nights, they were the houseguests of Ed and Robin Butler. From the airport, Butler took them downtown to take in a bit of Texas history. Following a short IMAX movie about the Alamo entitled The Price of Freedom, they visited the Texas shrine, where Butler’s ancestor, James Butler Bonham, played a decisive role. On the way, they walked through the historic Menger Hotel, where Lt. Col. Teddy Roosevelt (the U.S. president who signed the SAR Congressional Charter in 1905) recruited most of his “Rough Riders” in the bar. They were told the story about the two famous ghosts of the Menger.

A few blocks away they visited the Tower of the Americas, where they got a kick out of the “4 – D” movie about Texas, and enjoyed a great Judge Ed Butler inducted Duke Alexander zu Mecklenburg – prince and heir to the Duchy of Mecklenburg – as a member of the Spain SAR Society. The duke’s father, Duke Borwin zu Mecklenburg, was inducted in absentia.That afternoon was spent cooling off at the Butler’s shaded swimming pool. At the El Chaparral (Roadrunner) Mexican restaurant in Helotes, Texas, that evening, the group enjoyed a large platter of fajitas. 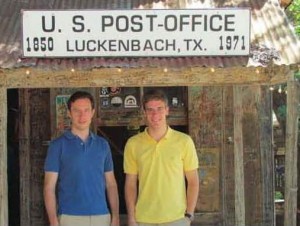 After sleeping late on Sunday, all enjoyed a Tex – Mex brunch at Las Palapas Mexican restaurant, following which there was a short tour of a nearby German town, Boerne, Texas. Duke Alexander was heartened to discover that the street signs for Main Street were marked “Hauptstrasse,” which means Main Street in German. That afternoon was spent relaxing by the pool.

Some 62 dignitaries attended a joint Templar and SAR reception and dinner in honor of the duke and Pecak at the Tost Francais Bistro in San Antonio. The event chairman was Col. Joe M. Ware, who was presented an oak leaf cluster to his SAR Bronze Good Citizenship Medal. Former Chapter President and TXSSAR Historian Peter Baron served as Judge Butler’s Aide de Camp.

This event was the highlight of their visit to San Antonio. Distinguished guests included former longtime Mayor Lila Cockrell, president of the San Antonio Parks Foundation Board; Honorary German Counsel Bernard J. Bueckner; retired Brig. Gen. Julius Braun, a member of the Manhattan Project; and many current and past DAR and SAR leaders, including NSSAR Chaplain Gen. James Taylor, who is also the current chapter president of the San Antonio chapter.

For his efforts in sponsoring Pecak on his concert tour, on behalf of the San Antonio SAR Chapter, Butler presented Duke Alexander with the prestigious SAR Silver Good Citizenship Medal. Both the duke and Pecak were presented with SAR challenge coins. Duke Alexander also was given a copy of the Mecklenburg Declaration of Independence from May 1775. Both young men spoke to those assembled, each displaying effective communication skills.

On Monday, Butler drove Duke Alexander and Pecak to Austin, by way of Luckenbach, Texas, made famous by Willie Nelson and Waylon Jennings. At Luckenbach, both young men were sworn in as deputy town marshals and presented with their badges of office. The postmaster played a recording of the Jennings and Nelson song “Luckenbach, Texas,” which neither of the young men had heard before. A few miles down the road in Fredericksburg, the group visited the World War II Museum of the Pacific.

Lunch was eaten at Texas’ finest German Restaurant, Der Lindenbaum. The group toured the LBJ Ranch (President Lyndon B. Johnson was a cousin of Butler’s), located about 10 miles west of Johnson City, Texas, where they saw Air Force “One and one – half,” a small jet President Johnson kept at the ranch. That evening, St. Matthew Priory hosted Duke Alexander and Pecak to a dinner at the Headliner’s Club, organized by and presided over by Brig. Gen. Robert “Duke” Bodisch. At that event, Bodisch, representing Gov. Rick Perry, inducted Duke Alexander as an admiral in the Texas Navy. Both young men briefly addressed the group.

When Butler dropped off the two fine young gentlemen at the airport hotel, he extended his hand to bid Duke Alexander goodbye. The duke took Butler’s hand and hugged him with this left arm. Pecak followed suit. They both reported that they had enjoyed their visit deep in the heart of Texas. And their visit benefited both the Knights Templars and the SAR.

Though the battles were fought far away — in Upstate New York and coastal Virginia — the officers who won them were buried at the church's storied cemetery.