Recipient of the Congressional Medal of Honor

On Saturday, Jan. 6, 1968, wounded allies lay in an area that was blanketed by dense fog near Chu Lai in the Republic of Vietnam. Worse, the territory was held by the enemy and reported to be heavily defended. Maj. Patrick Brady was second in command of the 54th Medical Detach ment. Two aircraft already had been shot down trying to save the wounded men, and other attempts to reach them earlier in the day were also unsuccessful. But Brady volunteered to try to rescue them.

With unmatched skill and extraordinary courage, Brady made several flights into the embattled territory. Flight after flight, Brady navigated through fog, smoke and hostile fire. His first helicopter was badly damaged and his controls partially shot away, but he returned minutes later with another chopper to rescue the injured. A mine blew up, and his second chopper was damaged and two crewmembers wounded.

But Brady still was able to fly, bringing more wounded back to safety. Throughout the day, Brady flew three helicopters and successfully evacuated 51 seriously wounded men, many of whom would have died without prompt medical treatment. 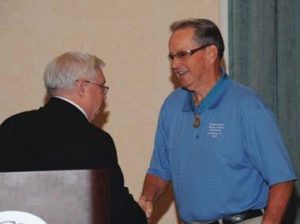 For his gallantry and intrepidity in action at the risk of his own life above and beyond the call of duty, Brady was awarded the Congressional Medal of Honor.

Brady flew more than 2,000 combat missions in Vietnam and evacuated more than 5,000 wounded. He continued to serve in the army after Vietnam, and retired in 1993, having achieved the rank of major general.

Currently, Brady serves as the chairman of the Citizens Flag Alliance, a broad-based, nonpartisan, nonprofit, national organization, which was formed to persuade Congress to pass a constitutional amendment to protect the American flag. It was in his capacity as chairman of the Citizens Flag Alliance that Brady met Bob Bowen of the Virginia Society. Year after year, Bowen has shepherded resolutions by the SAR in support of a constitutional amendment against the desecration of the American flag. 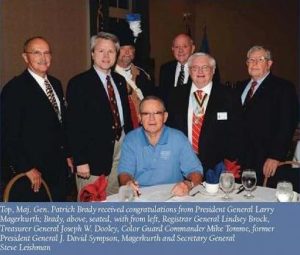 Last winter, Bowen asked Brady whether he was eligible to join the SAR and invited him to do so if he was. Bowen asked Genealogist General Joe Dooley to help prepare Brady’s application. Fortunately, Brady’s cousin, Gloria Weiser, had researched the family history, and could document the line back to John Lammon, a private in the 8th Regiment of the Albany County Militia from Albany, N.Y. At about the same time, President General J. David Sympson learned that the Congressional Medal of Honor Society would be holding its 2011 convention in Louisville on the very same weekend that the SAR would hold its Fall Leadership Conference. Sympson solicited private donations so that the SAR could co-sponsor the breakfast for Medal of Honor recipients on Friday morning, September 30th. Dooley informed Sympson that he and Bob Bowen were working on an SAR application for Brady, and Sympson decided we should plan to induct Brady into the SAR at the breakfast that we would be co-sponsoring. So, on the morning of September 30th, a small delegation of SAR compatriots, including an SAR Color Guard led by Commander Mike Tomme, went to the Galt House. Brady seemed pleased to meet us. As President General Larry Magerkurth prepared to induct him, Brady said nonchalantly, “Oh, maybe I should put my medal on.” He casually reached into his pants pocket and pulled out the Congressional Medal of Honor, which clearly had been worn quite a bit over the last 40 years. The men from the SAR were all wearing suits and ties or Continental Army uniforms; Brady was wearing a polo shirt and slacks. But as soon as he put that medal around his neck, he was the best-dressed man among us. Secretary General Steve Leishman, with the help of Paul Hays of the DC Society, had researched recipients of the Congressional Medal of Honor who were also members of the SAR. Leishman’s extensive research uncovered 25 SAR compatriots to receive this high honor. But now, with the induction of Brady, there are 26 SAR compatriots who are known to have been awarded the Congressional Medal of Honor.

Message from the President General