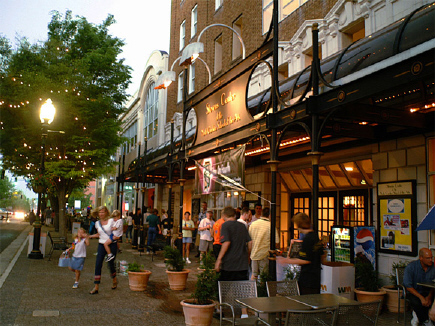 The 121st Congress attracted 474 Compatriots and guests to Winston-Salem, N.C. and its connected Marriott and Embassy Suites hotels. From July 9 through July 13, a full slate of activities kept attendees occupied. While most of the meeting was held in the Marriott, the larger banquets and luncheons were held in the Embassy Suites.

In addition to the business of the society, social events included side trips to Old Salem and Bethabara, communities settled by the Moravians in the 18th and 19th centuries and BB&T Ballpark for an evening of minor-league baseball action. The Congress was kicked off with a welcome reception by the North Carolina Society, which was hosting a congress for the first time in 70 years. Under the direction of Larry Guzy, the national chairman of the Congress Planning Committee, and Stephen Pittard, the state chairman, all events went according to plan like a well-tuned machine.

The initial election of officers was conducted on Tuesday with three contested races. Guzy and Treasurer General Stephen A. Leishman (DESSAR) vied for the position of Secretary General, with Leishman prevailing and Larry Cornwell (ALSSAR) defeated Paul Hayes of the D.C. Society in the race for Genealogist General. In the race for Treasurer General, former-Genealogist General Joseph W. Dooley went against former Executive Director Joe Harris (NCSSAR) and Timothy Bennett (DCSSAR). With none of the candidates getting a majority on Tuesday, Dooley and Harris faced each other in a Wednesday morning runoff election with Dooley garnering the most votes.

Following the posting of colors, an invocation was given by Chaplain General Rev. A. Clark Wiser, followed by the Pledge of Allegiance, the national anthem and the presentation of gifts, which included a $20,000 gift from Mrs. Eleanor Niebell.

In new business, an amendment, known as “The Florida Amendment” was passed, bringing the NSSAR

Above, the George Washington Ring is passed from President General J. David Sympson to President General Larry J. Magerkurth during the Wednesday night banquet; below, Chancellor General Thomas E. Lawrence swears in PG Magerkurth with assistance from the new First Lady, Barbara; left, Sympson honors P. Anthony Zeiss following his Tuesday night performance. bylaws into compliance with the national charter. Now, all trustees, including Past Presidents General and members of the Executive Committee must be elected annually.

Another amendment, which would have expanded the duties of the Historian General was discussed and tabled.

Tuesday night’s banquet in the Embassy Suite’s Grand Pavilion Courtyard featured a pre-dinner presentation by compatriot Bob Bowen, which saluted American prisoners of war and those missing in action through the years. Following dinner, P. Anthony Zeiss, the president of Central Piedmont Community College, did a

North Carolina’s Jackson Causey Bloom edged out two-time competitor Kelcie Nicole Marquordt of Kansas in the finals of the Joseph S. Rumbaugh Oration Contest. From a field of 16, Bloom pocketed a check for $3,000 and was a guest and speaker during Monday’s Youth Awards Luncheon.

Other awards presented during the luncheon included:

A donation to the Children of the American Revolution was also presented during the luncheon. National President Mary Lib Schmidt represented the C.A.R., which is raising funds to build “comfort homes” through the Fisher House Foundation. These homes are made available to families of servicemen and servicewomen being treated at military and Veterans Affairs medical centers.

SAR Celebrates the 225th Anniversary of the U.S. Constitution

President General Stephen A. Leishman, a native of Washington, D.C., and a graduate of the…