A new species of monster

By Christopher Klein (The Boston Globe)

Massachusetts, like other states across the country, is gearing up this year to redraw its political boundaries, fitting electoral districts to America’s shifting population and reshaping its political map for the next decade. In Massachusetts this means losing a valuable congressional seat; the proposals for how this might shake out are expected to emerge from the State House this fall.

Thanks to the Boston Gazette’s brilliant branding, however, today the coinage overshadows Gerry’s other achievements – that he signed the Declaration of Independence, attended the Constitutional Convention, and served as the country’s fifth vice president.

Inevitably, redrawing districts does something else as well: It dredges up Americans’ disgust over insider politics. Redistricting gives the party in power the chance to shape the political map to its advantage – which everyone in politics likes to do, but nobody wants to be seen doing. The last redistricting effort in Massachusetts, in 2001, resulted in former House Speaker Tom Finneran pleading guilty to obstruction of justice after claiming under oath that he had nothing to do with the process. As politicians work in secret to carve their states into bizarrely shaped districts to protect their parties’ seats, they invariably confirm the public’s worst fears of shady back-room deals designed to squeeze voters themselves out of the political process.

This kind of partisan redistricting has been a part of American politics since the days of the Founding Fathers. The word we use for the process, “gerrymander,” was coined in Boston nearly 200 years ago to describe a contorted, amphibian-shaped state senatorial district in Essex County. Its creation earned Massachusetts an early reputation for underhanded political manipulation, and ensured that Governor Elbridge Gerry’s name would endure as a synonym for partisan trickery.

The real history of the original gerrymander, however, isn’t quite so simple, and reveals that both reputations carry a whiff of injustice. Gerry himself did not engineer the radical alterations to the state’s political map, let alone invent the idea of partisan redistricting. And far from being shut out of the process, the Massachusetts electorate, at least in 1813, fought back. While this monstrous creation of Massachusetts politics might expose the shameful flaws of our political system, the little-known fate of the original gerrymander offers another legacy as well, one that speaks to higher ideals. 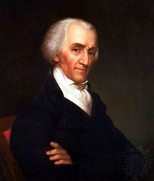 In the early 19th century, Massachusetts congressional districts were generally compact collections of contiguous towns. State Senate districts were even simpler: As enshrined in the 1780 state constitution, they strictly conformed to county borders.

The state’s voters were closely divided along party lines, but following the 1811 vote, the Democratic-Republican Party found itself with slim legislative majorities and a governor in the corner office, Marblehead native Elbridge Gerry. Before the 1812 elections, the party brazenly moved to consolidate its power by redrawing congressional and state legislative districts to weaken the opposition Federalist Party.

With a few strokes of the quill, the ruling party carved out towns from Federalist strongholds in Worcester, Hampshire, and Essex counties to form new Democratic-leaning state Senate districts. The most egregious byproduct was the new district snaking along the exterior of Essex County. Its bizarre shape instantly attracted the attention of Boston newspapers. The Weekly Messenger dubbed the serpentine district the “crooked S.” The Boston Gazette referred to it, dramatically and much more memorably, as “a new species of monster” and “a creature of infernal origin, both from its aspect, and from the circumstances of its birth.” The Gazette’s branding of the salamander-shaped district as the “gerrymander” instantly entered the political lexicon, and the accompanying caricature of the district as a winged monster became an icon of American political history.

The Salem Gazette’s
announcement of the demise
of the gerrymander in 1813.

The name was enormously catchy but also decidedly unfair. Partisan redistricting in America was nothing new, dating as far back as the early 1700s, decades before independence. The ink was barely dry on the Constitution when opponents accused Patrick Henry of redrawing Virginia’s congressional districts to prevent James Madison’s election to the very first Congress. But it was Gerry’s name that stuck to it. Although Gerry did sign the redistricting act into law, as the Massachusetts Historical Society states, “There is little evidence that Governor Gerry was the author or even a strong supporter of the redistricting law.” Thanks to the Boston Gazette’s brilliant branding, however, today the coinage overshadows Gerry’s other achievements – that he signed the Declaration of Independence, attended the Constitutional Convention, and served as the country’s fifth vice president. Adding further insult, Gerry’s name is constantly mispronounced when taken in vain. It’s pronounced gary, not jerry.

And what of the gerrymandered district itself? The odd – or perhaps encouraging – thing about the original gerrymander is that it was among the least successful in history. It initially worked: In the 1812 election, Federalist state senators won a slight majority of the popular vote in Massachusetts, but because of the distorted districts, they emerged with only 11 of the 40 seats, and the Democratic-Republicans expanded their hold on the chamber. But Gerry himself, tarnished in the public eye partly due to the partisan redistricting, lost the governor’s office. And the next year, in part because of anger over the gerrymandering (and in part because of the War of 1812), the election unleashed a Federalist wave so massive that the party captured 29 state Senate seats, including those in the so-called gerrymander district that had specifically been designed to prevent a Federalist from being elected.

The Salem Gazette ran a mock obituary for “the far-famed and ill-begotten monster” and proclaimed the vote “a loud warning to all his relations in this and the neighboring states.” Adjoining the article was an overlooked bookend to the iconic Boston Gazette cartoon: an illustration of the gerrymander’s skeleton with the inscription: “Hatched 1812. Died 1813.” The Federalists got the voters’ message: They restored state Senate district boundaries to county lines and also returned most congressional districts to their previous boundaries, ensuring that neighbors again voted with neighbors.

The original gerrymander may have died precipitately, but the impulse that created it has thrived. Partisan manipulation of voting districts endures; Massachusetts politicians are still drawing irregularly shaped districts, such as the snaking Fourth Congressional District, every bit as absurd as the creature of 1812. Nationally, the habit of gerrymandering has been blamed for worsening political gridlock, creating ideological havens that send extreme partisans to Washington instead of candidates who can appeal to a range of voters.

But in its quick demise, at least, the original gerrymander also offers an encouraging lesson: Though it was designed to marginalize voters, the most effective weapon for destroying the creature, in the end, was the ballot box.

Christopher Klein is a freelance writer and the author of “Discovering the Boston Harbor Islands.” E-mail him at chris@christopherklein.com .

Andres Cragie: Life of a Massachusetts patriot and scoundrel