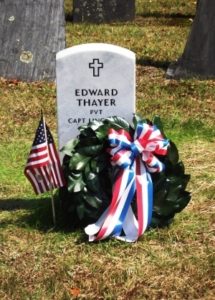 On a very warm Saturday, August 20, 2011, the descendants of Edward Thayer (1764-1827), civic leaders, and local residents gathered at North Shirkshire Cemetery in Conway, Massachusetts, for the dedication of Edward’s new gravestone. The original, historic marker, subsequently donated to the Conway Historical Society, was replaced with a standard, government-issued, military gravestone obtained from the Department of Veterans’ Affairs (DVA). The new, highly polished, marble stone, beautifully inscribed with the details of Edward’s Revolutionary War service, gracefully accents the ancient cemetery’s solemn and austere environment. One’s eyes cannot help but be drawn to it upon entering Edward’s quiet resting place.

Following the presentation of citations and letters, Ms. Cindy Watson, Daughters of the American Revolution, offered greetings and warm regards on behalf of her society.

The central occasion arrived with the dedication of Edward’s gravestone. Commander Steven Perkins, following the official MASSAR protocol for marking patriot graves, spoke first: “If the past is indeed prologue, then a glimpse into the past can provide a source of wisdom and inspiration for the future. As we honor this patriot today, let us be mindful of his service to our nation, and let us rededicate ourselves to the principles for which he held sacred.” The Rev Dr. Ashenden followed: “As we gather, O God, for this dedication today, we ask your blessing upon each of us. We thank you for this occasion as we honor the memory of Edward Thayer; we esteem his patriotism and courage, his faith and loyalty, and his willingness to sacrifice to make our world a better place. We thank you, too, for America and all patriots who have given us the liberties and privileges that we enjoy. May we be willing to serve you and our nation even as Edward Thayer did. May the ideals that we remember from the past sustain us today and safeguard us tomorrow. Amen.” Commander Perkins concluded: “We, the members of the Henshaw Chapter, Massachusetts State Society, Society of the Sons of the American Revolution, dedicate this marker to the glory of God and in recognition of the memory of Edward Thayer, a patriot of the American Revolution. Will you please place the wreath?” At that point, Mrs. Shirley Thayer Lucius, Edward’s fourth great-granddaughter, assisted by MASSAR compatriot and color guard member Mr. Allan Van Wert, placed the wreath upon Edward’s gravestone. Mr. Wert then faced the grave, stood at attention, and offered a slow salute. 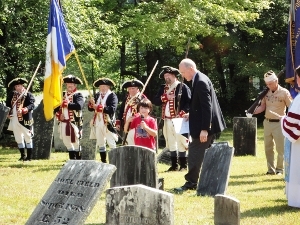 Mr. James E. Thayer, Edward’s fifth great-grandson, delivered a brief eulogy synopsizing what is known about Edward’s life and the significance of his Revolutionary War service. “We know little about the life of Private Edward Thayer,” James began, “My family possesses no letters, memoirs, journals, or other writings penned by my patriot ancestor.” James then noted the important role the Resolve of June 30, 1781, passed by the Massachusetts legislature in response to a request for reinforcements from General George Washington, had in the formation Colonel Joseph Webb’s regiment, the unit in which Edward served. Edward’s life in Conway was traced briefly, and James concluded the speech with “Edward lived a simple life. He amassed only moderate wealth and was not particularly influential in civic circles. He worked his land, cared for his wives, and raised his children. Yet, he was wealthy beyond measure; for his youth was indelibly marked by his participation in a great event in world history—the birth of the American republic. His willingness to risk his life for the principles that we hold to be true—freedom, equality, and justice—certainly qualifies him as an American patriot. Today, Saturday, August 20, 2011, we honor Edward and thank him for the role that he played in bequeathing to us our great and beloved nation.”

The Rev. Dr. Ashenden followed the eulogy with a prayer: “Almighty God, as we go from here, may this marker remind all who pass by of the devotion and dedication of all who have made our nation great. May all be humbled and encouraged by this marker to esteem and perpetuate these virtues with our lives. May the peace of God, which surpasses all, guard our hearts and minds in the ties of friendship and unity of Love. Amen.” Next, under the command of Mr. Wert, MASSAR’s safety officer, the society’s Color Guard executed a single-volley musket salute, which was followed by a two-volley salute fired by the VFW’s Color Guard.

After the crack of musketry had dissipated into the distance, Mr. Jerry Hazeldine, President, Robert Treat Paine Chapter, MASSAR, tolled the society’s bell fourteen times—one toll for each of the original thirteen colonies and the last toll in honor of George Washington. The closing benediction was offered by Rev. Dr. Ashenden, and the color guards retired the colors. Mr. Verne Thayer thanked the audience for their attendance, and the guests were then invited to enjoy light refreshments at a gathering hosted by the Conway Historical Society.

An Interview with Compatriot U.S. Representative Todd Akin of the Missouri Society

By Timothy Read Bennett, Past ChairmanNSSAR Congressional and Governmental Relations Committee This interview, with Compatriot…