By Lance Banning (From The Jack Miller Center)

Within three years of the inauguration of the new federal Constitution, America’s revolutionary leaders divided bitterly over the policies most appropriate for the infant nation. Within five years, two clashing groups were winning thousands of ordinary voters to their side. Within a decade, the collision had resulted in a full-blown party war. 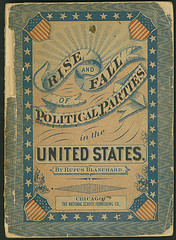 There has never been another struggle like it. These were the first true parties in the history of the world—the first, that is, to mobilize and organize a large proportion of a mass electorate for a national competition. More than that, these parties argued at a depth and fought with a ferocity that has never been repeated. The Federalists and the Jeffersonian Republicans—the friends of order and the friends of liberty as they sometimes called themselves—were both convinced that more than office, more than clashing interests, and more, indeed, than even national policy in the ordinary sense were fundamentally at stake in their quarrel. Their struggle, they believed, was over nothing less profound than the sort of future the United States would have, the sort of nation America was to be. Each regarded the other as a serious threat to what was not yet called the American way. And from their own perspectives, both were right.

This first great party battle is, of course, completely fascinating for its own sake. Between the framing of the Constitution and the War of 1812, the generation that had made the world’s first democratic revolution set about to put its revolutionary vision into practice on a national stage. This generation was a set of public men whose like has never been seen again. Without significant exception, they believed that the American experiment might well determine whether liberty would spread throughout the world or prove that men were too imperfect to be trusted with a government based wholly on elections. In an age of monarchies and aristocracies, they were experimenting with a governmental system—both republican and federal—unprecedented in the world. They had a never-tested and, in several respects, a quite unfinished Constitution to complete. They represented vastly different regions, and they had profoundly different visions of the nature of a sound republic. To understand why they divided and how they created the first modern parties is a captivating object in itself. It is the more worthwhile because not even in the years preceding Independence or during the debate about adoption of the Constitution have better democratic statesmen argued more profoundly over concepts that are at the core of the American political tradition: popular self-governance, federalism, constitutionalism, liberty, and the rest. Perhaps they still have much to teach about the system they bequeathed us, along with entertaining stories of our roots.

No single volume could pretend to be a comprehensive sourcebook on the first party struggle. This one does, however, aim to make it possible to understand the grounds and development of the dispute. For this reason, it is fuller on the earlier years of the struggle, when positions were being defined, than on the later years, when the arguments had become more repetitive and routine. It focuses tightly on the dispute between the parties, not on national questions such as slavery, which seldom entered directly into the first party conflict, or on the development of constitutional jurisprudence in the courts. Although it tries, at several points, to capture something of the flavor of the grassroots conflict, it is weighted, more than some might like, with the writings of major national leaders. But this was very much a conflict that descended from the top, as major national figures developed their disagreements, took them to the public, and reached out for links with local politicians. Debates in Congress were probably the most widely read political publications of these years.

This is not primarily a work for scholars, who will find more-authoritative versions of the texts in sources such as those identified in the bibliography. Rather, to make the materials as accessible as possible, spelling and punctuation have been modernized, obvious printing errors or slips of the pen have been silently corrected, and abbreviations have been spelled out when that seemed useful. So far as seemed possible, nevertheless, the documents are left to speak for themselves. Every volume of this sort must start with an editor’s decisions, the most important of which are those excluding valuable materials because they would not fit between two covers. This, however, is as much or more of an intrusion than I have wanted to make. Editorial introductions are limited to providing identifications or essential context. Elisions are clearly indicated and seldom extensive. In every case, as with the light modernization, they have been done with conscientious concern for the author’s thought and intent.

Several graduate students, two family members, one secretary, and a few undergraduates at the University of Kentucky provided materials for the collection or carried out the tedious job of typing the transcripts. Thanks are due to Todd Estes, Matt Schoenbachler, Colleen Murphy, Todd Hall, Jennifer Durben, Cheris Linebaugh, Lynn Hiler, JoAnne Shepler, and Clint and Lana Banning. A superb group of fifteen scholars from several disciplines devoted two days to a delightful discussion of a preliminary version of the volume at a Liberty Fund colloquium in Lexington in May 1998. In the process, they corrected some mistakes and made some valuable suggestions for additions. John Kaminski, Kenneth Bowling, and Norman Risjord reviewed the manuscript again. Finally, two of my students, Paul Douglas Newman and David Nichols, acted at different times as coresearchers and contributed essentially to making the project a quicker, fuller, and better one. Special thanks are due to them, and the volume is dedicated to them and their peers.

One of the most impressive collections of original founding documents, Lance Banning’s Liberty and Order: The First American Party Struggle [1787] is now available online in .pdf format through Liberty Fund’s Online Library of Liberty.

The Men who lost America

All strategies were based on a serious misreading of sentiment in America. It was an axiom of British policy that most Americans were loyal to the Crown, and that the Revolution was led by “the intrigues of a few bold and criminal leaders.” Loyalists in the Colonies tended to confirm this biased view.