The Jack Miller Center (JMC) in partnership with leading universities and colleges across the United States has launched a new Constitution Day Initiative to heighten awareness of the need for education in the American constitutional tradition. regarded academic centers dedicated to strengthening education in American history and politics will guide this effort, which aims to increase attention to teaching and studying America’s Constitution.

JMC President, Rear Admiral Mike Ratliff, praised these educators for focusing attention on the “essential task of every generation of American citizens, understanding our Constitution and the Founders’ vision for our political and economic life. Senator Robert Byrd showed great foresight in mandating that our colleges and universities focus attention on this essential task each year as part of their observance of Constitution Day, and the distinguished scholars who have taken up this task should give all of us hope for our nation’s future.”

Carlton Family Foundation (Nashville, TN) has provided a lead gift for the Constitution Day Initiative. This project will be an ongoing, national effort to deepen Americans’ knowledge and appreciation of the Constitution which is celebrated annually on September 17. The theme for 2011 is “The Limits of Federal Government Action in Domestic Affairs under the Constitution.” 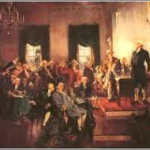 “With a network of over 400 JMC Fellows, many of whom specialize specifically in the study and teaching of the American constitutional tradition, and with partner programs on 44 college and university campuses, the Jack Miller Center is ideally suited to take up the cause of building awareness of Constitution Day and having a major national impact on how it is observed on college and university campuses as well as in many communities across the country,” said Bill, professor of history, University of Tennessee-Chattanooga, who proposed the project at the JMC’s board meeting in February.

The core of the Constitution Day Initiative will be programming on individual campuses nationwide. Scholars from across the country have been invited to submit proposals to fund Constitution Day events on their campuses. The Jack Miller Center will award up to $2,000 in support for each campus. Special consideration will be given to proposals that include matching funds from scholars’ colleges or universities.

The JMC encourages a variety of efforts that will build awareness and understanding of the Constitution and the free institutions and liberties it guarantees. These events could range from a small ‘brown bag’ lunch discussion for students to a larger public reception or educational lecture. In addition, the JMC also envisions an online educational portal for educators and others interested in constitutional issues, as well as a capstone event in Chicago for the general public. The JMC’s Chicago Initiative is a unique consortium of several Chicago area colleges that are working together to enrich education in America’s Founding Principles and history.

In 2004 Congress passed legislation requiring that every institution of higher education receiving federal funds must hold educational programming on September 17 in observance of constitution Day. The observation of this holiday on campuses since this legislation passed has been minimal at best. Through this initiative, the JMC hopes to have a significant impact on how Constitution Day is observed on campuses and in communities across the nation.

See Proposal Guidelinesfor information on bringing a Constitution Day Program to your campus.

Campaign for Historic Photos of the Revolutionary War Generation