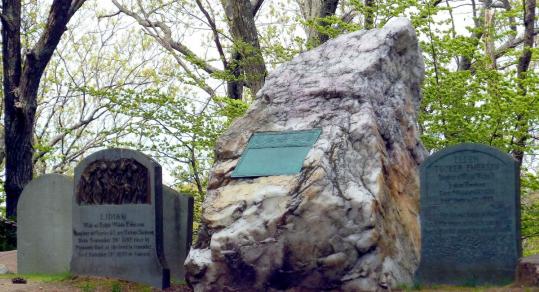 CONCORD – On a beautiful spring afternoon bursting with life, it might seem strange to stroll through a cemetery, but we were hardly alone when we stopped first at Old Hill Burying Ground in downtown Concord and continued on a few blocks to Sleepy Hollow.

Dog walkers were trotting the ridgeline paths that meander through the hill-and-dale landscape past flowering trees and gravestones both plain and grandiose. Camera-toting tourists were climbing the steep path to Authors Ridge. They nodded to the left to the surname-only stone of Nathaniel Hawthorne, to the right at the marble plate marking the grave of Louisa May Alcott, where a small wood violet bloomed. Several who had come before us left some token – a stone, an acorn, a piece of bark – on the palm-sized pillar marked “Henry” where Henry David Thoreau lay amid his parents, brother, and sisters.

But touching bases with the graves of historical figures is almost an academic exercise compared with imagining the lives of the lesser known, those of whom English poet Thomas Gray spoke in “Elegy Written in a Country Churchyard” (1751): “Full many a flower is born to blush unseen, / And waste its sweetness on the desert air.” These are the graves that most intrigue us, the ones that allow us to invent our own stories when we try to imagine what their lives, so far in time from ours, might have been like.

Pride of place on Authors Ridge might belong to the huge, rosy quartz boulder that marks the grave of Ralph Waldo Emerson. But we are more intrigued by his less-celebrated daughter Ellen Tucker Emerson. Her gravestone notes, in part, “She loved her Town. / She lived the simple and hardy life of old / New England.” It goes on to record that, “Of a fine mind, she cared more for / persons than books.” Was that a thinly veiled commentary about her father’s profligate rhetoric? 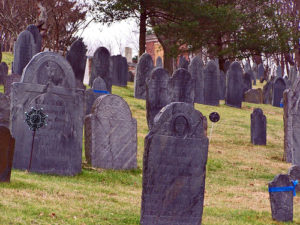 Because Concord’s cemeteries span the centuries, their gravestones record an uncommon number of soldiers, including those who served in the French and Indian wars and others who fought in the American Revolution. Roger Brown, for example, was a Minuteman on April 19, 1775, and mustered out of the Concord Light Infantry in 1786. He lived another 54 years, leading us to wonder how he savored his hard-won freedoms.

Sleepy Hollow is dense with GAR markers noting the Civil War service of Concord sons, though few are as eloquently eulogized as Ezra Ripley: “of slender physical strength and of a nature refined, sensitive, and delicate, he . . . shrank from no fatigue or danger until worn out in her service, he gave his life for his country.” He “died on the Mississippi River near Vicksburg” a few weeks after the Confederate surrender. Such epitaphs remind us that the mass undertakings of history are really just the acts of individuals.

Other stones record personal tragedies almost too devastating to contemplate. A single marker records the fate of Harold Whiting, his wife, Julia Dana Whiting, and their four children: “Lost at Sea May 27 1885.” It is hard not to conjure up some charged tale of maritime adventure gone awry.

Domestic dramas abound as well. What would a romance novelist make of the single stone that marks the graves of George W. Maker and “His Wife Clara T., Late Wife of Johnson G. Trask, Civil War Veteran”? Did Clara pine for her first mate, even while married to another? Did poor George always play second fiddle?

In the end, we take solace in the evidence of lives well lived. In Old Hill Burying Ground, the elegantly carved slate of Captain Jonathan Butterick, who died in 1767, attests that he was “in the field a good officer; in ye church a deacon grave & not duble-tongued,” while his wife, Elizabeth (died 1772), was “a gentlewoman of uncommon prudence.” We believe they would have made good neighbors.

That’s the thing about old cemeteries – you never know who you might meet.

Patricia Harris and David Lyon can be reached at harris.lyon@verizon.net.

Why Is America Exceptional?

Why Is America Exceptional? By Matthew Spalding, Ph.D. ( From The Heritage Foundation) In 1776,…