National Society of the Sons of the American Revolution 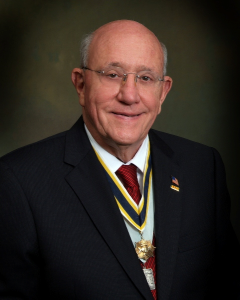 Today marks the forty-fifth anniversary of the official birthday of Memorial Day, as signed into law in May 1966 by President Lyndon B. Johnson at Waterloo, New York. This day of remembrance for those who died in our nation’s service is by no means new in our American history.

The origins of Decoration Day, as this celebration was once known, are lost to history. A group of women in the South began decorating veteran’s graves before the end ofthe Civil War.

This day of remembrance of our nation’s veterans is an important reminder of the sacrifices our men and women have made to preserve our freedom. It is not a time to give political speeches of why we should or should not continue to defend those freedoms, but rather to honor our service men and women who, today, are willing to serve their country by placing themselves in harm’s way.

We Americans who are here today are the beneficiaries of that legacy, regardless of our own heritage and ethnic origins. It would be fitting of us to remember a loved one or perhaps an ancestor who made the sacrifice that brought honor and peace to our nation.

The National Society of the Sons of the American Revolution continues its efforts to mark the graves of our Revolutionary War patriots, wherever their final resting place is located. The ceremony today represents one of hundreds oflocations across the nation where Americans are gathered to honor our fallen heroes. We are proud to be a part of all Americans who have come here today to remember these patriotic men and women, as well as those who continue to serve our nation. We pray for their safe return.

Though the battles were fought far away — in Upstate New York and coastal Virginia — the officers who won them were buried at the church's storied cemetery.

by Steve Kaufman Not only is West Main Street becoming Museum Row. It also is…