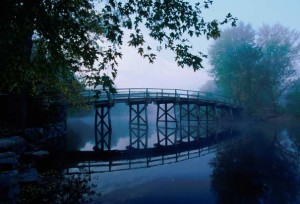 “I was born in Japan and raised in Japan, but my parents are from South Korea,” the resident alien said from her home in Lexington last week. “In Japan, you don’t get citizenship automatically even if you are born there. I always had a South Korean citizenship, but I never lived there and I don’t speak very much Korean.

“I never could vote in Japan.”

At 48, Kim-Weaver is poised to change all that when she joins 49 other immigrants in swearing allegiance to the United States today in the first-ever naturalization ceremony at Concord’s old North Bridge in Minute Man National Historical Park.

“My parents never thought of changing their citizenship,” Kim-Weaver said.”This is my first time to be a citizen where I live. I can’t wait to vote!”

The ceremony, among numerous events at Minute Man marking Patriots Day and the first battles of the American Revolution, has been in the works for nearly a year, according to park superintendent Nancy Nelson. Last year, the National Park Service entered into a memorandum of understanding with US Citizenship and Immigration Services to encourage the use of national parks for naturalization ceremonies.

The historical symbolism of the area’s battlegrounds where Colonists launched their fight for independence from England on April 19, 1775, seems so obvious as a setting for welcoming new Americans to citizenship, Nelson said, that she and her staff were surprised it had never before been done.

The event looked in doubt late last week as a shutdown of the federal government loomed, but a stopgap spending measure has kept the gates at Minute Man” and federal properties nationwide” from closing at least through tomorrow. Funding for the rest of the government’s fiscal year was expected to be sorted out by week’s end.

The ceremony will include a fife and drum rendition of “The Star-Spangled Banner” and costumed representatives from Minuteman groups from Concord, Acton, and Lincoln” the three towns that sent militia companies to confront the British regulars at the North Bridge before they could seize arms and supplies stashed in Concord, said Lou Sideris, chief of planning and communication for the park.

The first muskets fired in the revolution may have been at Lexington’s Battle Green, but the first order by a Colonial commander to fire on the British “the shot heard ’round the world’ immortalized in Ralph Waldo Emerson’s “Concord Hymn” came hours later at North Bridge, Sideris said.

“It still means a lot to Americans,” he said.”The whole idea that we are going to sacrifice for liberty really comes from that spot in a lot of ways.”

“If the 500 militiamen who fought at the old North Bridge could look forward 236 years and see 50 people from 29 countries come here to become citizens of the United States for all the reasons they fought the British, wouldn’t they be moved? I am moved just thinking about it,” said Denis Riordan, the citizenship agency’s district director.

Between 2005 and last year, the agency’s Boston office has granted 169,509 requests for citizenship in Massachusetts, Rhode Island, New Hampshire, and Maine, Riordan said.

The majority of applicants either have been in the United States legally for at least five years, or are married to a US citizen and have lived here for at least three years, he said.

Kim-Weaver’s path to US citizenship began when she met architect Andrew Weaver while working on a construction project in Japan in the early 1990s.

They fell in love, he proposed, and she planned to move with him back to Boston. But her parents would not let her go unless she first applied to graduate school. That was in 1992.

“I came here on a student visa to attend business school at BU” that was the only way my parents would let me come here. They were afraid,” she said.”I have been here since. My mom comes every year. My father passed away a long time ago, a year after I came here. He did not have a chance to come here. It was sad.”

Kim-Weaver never finished her degree at Boston University, which she said became too expensive, but she married Andrew, and has built a small business of her own helping Japanese students attend summer camps and prep schools in the United States.

Despite living in this country for 19 years and receiving a study pamphlet about American history and civics, Kim-Weaver said she was nervous about taking the citizenship exam.

“The first question was what is one of the promises you have to make to become a citizen” I answered to be loyal to the US,” she said.”I was nervous” I didn’t know what year the Constitution was written” but they did not ask that.”

Kim-Weaver said she is looking forward to the ceremony on the banks of the Concord River.

“I heard that it will be a very special ceremony. I am very excited. It is in Concord and that means a lot. It is a very historical place.”

More than 600 people attended the Youth Awards Luncheon on Monday. Among the major award…