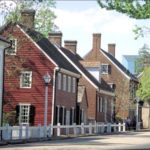 The The Twin City Quarter Hotel Complex at 425 North Cherry Street, Winston-Salem hold the hotels for the event. Each hotel is joined by a bridge to connect them with the Congress. Meetings and General Sessions will be in the Marriott while the President’s Reception and the banquets will be held in the Embassy Suites. There is no other event in the hotels on that weekend so all the rooms are available. Room rates are $139 per night for Embassy Suites and $124 per night for the Marriott. For more information on the Congress, visit NCSSAR’s website under Calendar and Events July 8-13, 2011. or through the NSSAR Congress Planning Committee listing.

The closest major airport is Greensboro, High Point, Winston-Salem (GSO), some 18 miles from the hotel. A free shuttle is available to drop you off at the rear of our hotel. Also, ABC Door 2 Door Limousine Service will provide transportation for a minimal fee from GSO. If you are driving, the hotel is just off Business 1-40 near State Highway 52 in the downtown area. There is a bus terminal one block behind the hotel.

Early registration will begin the afternoon on. Thursday, July 7. On Friday, July 8, we will hold a Genealogy Seminar and registration that will continue that afternoon. A golf outing is planned at Tanglewood Park’s Championship Course, designed by the legendary Robert Trent Jones Sr. It’s one of the premier golf courses in the nation.

Attendees have the option of a baseball game on Friday evening at the new BB&T Ballpark — home of the Winston-Salem Dash, a Class High A Chicago. White Sox affiliate. The SAR Color Guard is scheduled to present the colors as the game starts at 7 p.m. We will use a private party deck that includes hot dogs, hamburgers, potato salad and soft drinks, with fireworks after the game. 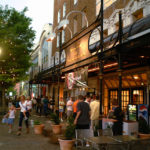 A history tour is scheduled for Saturday, July 9. The journey will begin at the foundations of Winston-Salem. Historic Bethabara was the 1753 site of the first Moravian settlement in North Carolina and was the area’s frontier and religious trade center until 1772. Today, the archeological ruins, as well as the restored and reconstructed buildings are set in a beautiful, wooded 175-acre park. Tour the unique 1788 congregation house, known as the Gemeinhaus, visit the archaeological remains in the reconstructed palisade fort and stroll through the historic gardens. We will have lunch in the Old Salem Visitors Center, where Lord Cornwall and Nathaniel Greene will recount their actions during the conflict. Old Salem, the Moravian Church town built by Bethabara’s early inhabitants in 176, has survived become one of America’s most authentic and well-documented colonial sites. It is now a living history town where interpreters demonstrate the activities of the 18th and early 19th centuries,

Salem will welcome you into its homes, shops and gardens. The Moravians in Salem received several Virginia soldiers wounded in the fighting at Guilford Courthouse. The care taken of them, the sympathy shown, and the successful, even remarkable service given to them by Dr. Bonn (Salem’s physician) gave the residents a good reputation with the officers of the Continental Army. Old Salem was frequented by Revolutionary War soldiers from both sides and was visited by George Washington in his 1781 southern tour 230 years ago. Located on the southern edge of Old Salem, the Museum of Early Southern Decorative Arts researches and exhibits the original decorative arts of the early South, showcasing the furniture, painting, textiles, ceramics, and metalworkers made and used in Georgia, Tennessee, Kentucky, Maryland, Virginia and the Carolinas through the 1820s, with some authentic pieces of furniture from the Revolutionary War time period.

A visit to Old Salem is not complete without a stop at the world-famous Winkler bakery. Established in 1800, Winkler still bakes its famous Moravian sugar cake, breads and sugar cookies daily and serves them hot from the wood-fired oven. In the heart of Old Salem lies the Salem Tavern, complete with costumed wait staff and an ambience of an earlier time as dishes are carried out that reflect traditional Moravian cuisine. You can take a self-guided tour of the Timothy Vogler Gunsmith shop, the Blum House and Vogler House, the Market-Fire Engine House, Single Brother’s House, Old Salem’s Children Toy Museum, and the Gardens of Salem.

On Saturday afternoon, attendees will travel by bus back for the Host Society Reception/ NCSSAR centennial birthday party in the open atrium of the Embassy Suites. Refreshments will be provided by Embassy Suites with music by the Guilford Fife and Drum. Dinner follows on your own at area restaurants.

The Ladies Hospitality Room will be hosted by the North Carolina Ladies Auxiliary in the Bethabara Room from Saturday, July 9, to Wednesday, July 13. The ladies are invited to our morning general session on July 11. The schedule will be posted.

On Sunday, the Memorial Service will be held at the First Baptist Church, 501 West 5th Street, only one block away from the Convention Center, which allows us to march to the church. The NCSCAR will assist as ushers for the service. The color guard wife assemble for the President General’s review prior to the parade to the church. The Memorial Service will be held at 2 p.m.

The business sessions begin on Monday at 9 am. and continue through Tuesday into Wednesday. We will vote on a variety of policy issues and elect national officers for 2011- 2012. The Youth Luncheon will be held, and we will get to hear and see all the fantastic work done by the youth contestants. 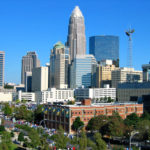 On Tuesday, July 12, the First Lady’s Luncheon will be held at Graylyn International Conference Center. Graylyn is the 1932 home of Bowman Gray Sr. (1874-1935), aid Natalie Lyons Gray. He was the son of James Alexander Gray, one of the founders of Wachovia Bank and chairman of R. J. Reynolds Tobacco. Gray is the namesake of Bowman Gray Stadium and the former Bowman Gray School of Medicine3 which is now Wake Forest University Baptist Medical Center, by Wake Forest University. You’ll be back in time for the Tuesday President General’s Banquet. 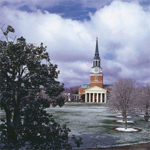 On Wednesday you can enjoy a city tour of Winston-Salem with stops at Reynolds House and Gardens, Wake Forest University and Mr. Hanes’ Handmade Cookies. The restored 1917 home of Katharine Smith Reynolds and her husband, Richard Joshua Reynolds, founder of the R. J. Reynolds Tobacco Company, is situated within a lush, beautiful landscape. You will walk though history, explore in the welcoming interior with period furnishings, historic clothing and memorabilia from the family. After the tour, you might stroll in the beautiful gardens. Then you will drive though the beautiful campus of Wake Forest University with a stop at the Anthropology Museum. This is North Carolina’s only museum dedicated to the study of global cultures. The museum’s permanent exhibits display objects from as far away as Africa, Oceania and Latin America and as nearby as the state’s Yadkin River Valley. The featured exhibit for sum me 2011 is Culture & Couture, displaying a selection of the museum’s ethnic costumes from around the world. Exhibits include hands-on activities for all ages. Our last stop will be at Mr. Hanes’ Handmade Cookies. All dough is hand-rolled and each cookie is hand-cut. While you are on the tour, you will receive six cookies Moravian sugar crisps, ginger crisps, lemon crisps, chocolate crisps, butterscotch crisps and black walnut crisps.

Other optional Wednesday tours can be arranged, including a tour of Guilford Courthouse Battleground and the Greensboro History Museum and a visit to the Bob Timberlake Gallery. Visitors will provide travel directions by private car and more information. No one wants to miss the formal Wednesday Installation Banquet.

All in all, a great time is in store for you when the Congress comes to North Carolina and Winston-Salem this summer.

Registration For The 2011 Congress In Winston-Salem, N. C.

Registration will be $270 per attendee. A reduced fee of $250 is available for those eating vegetarian meals for the Youth Luncheon and two banquets. Included in the registration fee is a one-time pass to Old Salem, the Sunday Memorial Service, Monday’s Youth Luncheon, Tuesday’s President General’s Banquet and Wednesday’s Installation Banquet.

Some of the events are:

Note: The cost of the these three events is included in the registration: Monday’s Youth Luncheon, Tuesday’s President General’s Banquet, and Wednesday’s Installation Banquet.

A Visit With Compatriot Congressman Howard Coble Of North Carolina

Over the past decade, many who have attended a patriotic rally may have had the…