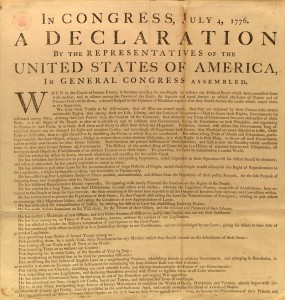 Happy Birthday America! America is 234 years old. She was born on July 4, 1776, with the passage of the Declaration of Independence. Since then, America has grown from thirteen colonies on the east coast to fill a vast continent. Her economic and military power is envied around the world. And the American people are hardworking, churchgoing, affluent, and generous.

Independence Day is an opportunity each year to remember the root of our success’ our founding principles as set forth in the Declaration of Independence.

The Declaration of Independence serves as a philosophical statement of America’s first principles. As Matthew Spalding describes, the Declaration affirms that all men are created equal. By nature, men have a right to liberty that is unalienable, meaning it cannot be given up or taken away. And because individuals equally possess such inalienable rights, governments derive their just powers from the consent of those governed. The purpose of government is to secure these fundamental rights, and the people retain the right to alter or abolish a government that fails to do so.

These principles have made America the great nation it is today. But, since the early 20th century, these principles have been under attack in the academy, the media, and popular culture. So-called progressives have rejected the existence of self-evident truths”in the Declaration of Independence and elsewhere. Instead, they embrace the notion of “Progress” that is constant change towards an unspecified end. From these faulty principles, it follows that, all men are not created equal; some people are further along in the historical process than others. There are not permanent rights with which man is endowed. Government creates rights, and these rights evolve according to the demands of the time. There is no need for consent of the governed, just experts who will tell us how to live and how to progress.

This is a serious attack on our principles, but not an insurmountable one.

If you want to learn more about America’s founding principles, The Heritage Foundation has an abundance of materials.

Check out the First Principles Essay series. It covers a variety of topics including the Founding, the Constitution, Progressivism, and Modern Conservatism.

Don’t forget our books! Add The Heritage Guide to the Constitution and How to Read the Federalist Papers to your summer reading list. http://www.heritage.org/Bookstore If you are interested in starting your own summer reading group, watch for the forthcoming leaders guide to Matthew Spalding’s We Still Hold These Truths: Rediscovering Our Principles, Reclaiming our Future. In the coming weeks, look for our new companion video series for We Still Hold These Truths too.