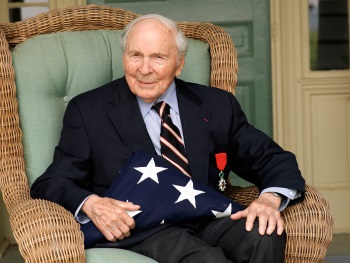 Compatriot Frank Buckles, the last living American World War I veteran and the subject of the cover story of the current SAR Magazine, died peacefully at his Charleston, West Virginia, home on Sunday, February 27, Frank Buckles was a SAR member for 75 years and a long time member of the Gen. Adam Stephen Chapter, WVSSAR. Celebrating his 110th birthday on February 1st, surrounded by family and friends, he was in relatively good health until his death.

He was preceded in death by his wife, Audrey, and is survived by his daughter, Susannah Buckles Flanagan, and her husband.

Buckles will be buried in Arlington National Cemetery with assistance of the NSSAR. An announcement of services is pending.

My thoughts and prayers go out to Compatriot Frank Buckles’ daughter, Susannah, his family and to all his compatriots in the West Virginia Society who especially feel his loss.

Originally from Missouri, Buckles was 16 when he was shipped off to France in 1917. He served in the ambulance corps. He also served in World War II, was captured by the Japanese in the Philippines, and spent three years as a prisoner of war.

As in The SAR Magazine article, Buckles was described as “The Last Doughboy” and “Pershing’s Last Patriot.” A recent magazine article described his work on “his last mission” to convince Congress to provide a permanent national monument to World War I in Washington D.C. This effort is still ongoing.

Buckles’ ties to the National Society Sons of the American Revolution were strong. He chose his farm in eastern West Virginia because it was near the place where his Revolutionary ancestors lived. He was a recipient of the National Society of the Sons of the American Revolution 1000 South Fourth Street Louisville, Kentucky 40203 SAR’s Distinguished Patriot Award, the Gold Good Citizenship Medal and the War Service Medal.

Compatriot Frank Buckles embodied the American soldier ideal best described by General MacArthur, “Their guidepost stands out like a tenfold beacon in the night: Duty, Honor, Country.” A descendant of a patriot of the American Revolution and decorated veteran of World War I and World War II, Frank Buckles exemplified SAR’s finest tradition of patriotic leadership and service to our nation. In his memory, the SAR will continue to support his efforts to ensure that his fellow Doughboys are honored in our Nation’s Capitol with a National World War I Memorial